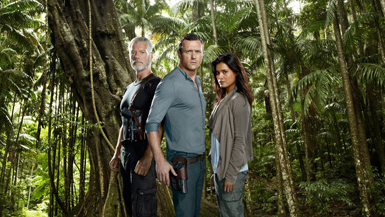 Despite Entertainment President Kevin Reilly’s hope that Fox’s unexpected renewal of FRINGE for a fifth and final season would afford his Network a little forgiveness in terms of its “checkered history with genre television,” there’s still that little issue we have with his handling, make that mishandling, of TERRA NOVA. (Translation: Still bitter!)

Which is precisely why during Sunday afternoon’s Television Critics Association Press Tour touting his newest project that sees him play Sheriff Ralph Lamb’s (Dennis Quaid) younger brother Jack on CBS character-driven period piece VEGAS, we jumped at the chance to corner Jason O’Mara alongside a gaggle of reporters in an effort to get him to elaborate on his comments from earlier in the panel that had him calling out Fox for a “taking a very long time to make what was ultimately a premature decision.”

“We were just finding our feet and I think we just proved that by the season finale,” said O’Mara immediately following the VEGAS panel. “There was a lot more story to tell and I think there was an audience to watch it, certainly internationally, the show went down extremely well, huge numbers. Just domestically I couldn’t quite get there.”

So just where did O’Mara think TERRA NOVA went wrong?

And while O’Mara isn’t quite sure what a second season would have looked like — having not had that conversation with the showrunners who pitched numerous potential concepts to Fox in the hopes of securing a second season — he is sure that when VEGAS starts shooting its first season he’ll at the very least have some interesting conversation fodder with co-stars Michael Chiklis and Sarah Jones.

“I think we as actors, maybe we’ll have that in common, that we go towards slightly outside the box or genre stuff,” said O’Mara on his fellow VEGAS stars Chiklis and Jones who thanks to NO ORDINARY FAMILY and ALCATRAZ know all too well what it’s like to be involved with a genre fan favourite. “I think they’re great when they work but they don’t always work. Genre is really hard to pull off so we’ll probably commiserate about it with each other.”