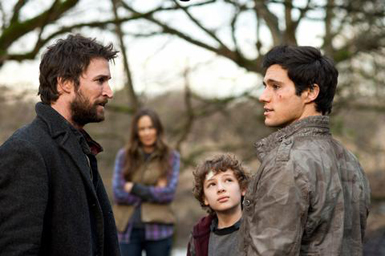 In the first season of FALLING SKIES, the final three episodes were all about talking the fight to the Skitters and Mechs and reminding the occupying aliens that we had not given up entirely on reclaiming our planet.  In fact, the 2nd Mass worked strategically with other pockets of resistance to launch a deadly attack against the aliens.  Not only did our heroes fight back and inflict some damage, they also found out that there was another alien species controlling the Skitters and Mechs: the Overlords.

Coming face to face with the Overlords in the season one finale was a pivotal moment, and it is seared in our brains how naively Tom Mason took Karen’s hand and stepped aboard the alien aircraft.  Then, in the beginning of the second season, we learned that Tom’s worst fears were realized, the aliens had no information to share and were content to nearly torture him nearly to death as a reminder of their omnipresent control of the planet.

Thus, the second season has been a murky mine-field as Tom and his son Ben faced continuous scrutiny and fear from the other survivors because of their alien-confinement.  Each not only struggled with prejudice and fear from their friends and family, they also wrestled with self-doubt as their own bodies and minds seemed to betray them.  The physical, emotional and psychological damage inflicted at the hands of the aliens was taking a toll; but it also provided some useful information about what weaknesses the aliens themselves may have.  Mechs could be shot with armor-piercing bullets; Skitters could be slain in close-quarters combat, and Overlords could be killed with a single bullet.  The aliens may have advanced technology, but it did not make them impervious from attack.  They were vulnerable as well.

So this season, as the 2nd Mass survivors began to assess the strengths and weaknesses of their enemy, another interesting twist was revealed:  not all the Skitters wished to remain in servitude of their cruel masters anymore. A small contingent of rebel Skitters sought to align with the 2nd Mass to launch a coordinated strike against the Overlords.  But being betrayed time and time again by people they have known and trusted, it is hard for the 2nd Mass to accept the overtures of the rebel Skitters.  It just sounds like another alien mind-game, one which could kill them all.

Yet if they could not trust the rebel Skitters, who could the 2nd Mass turn to as their numbers continued to dwindle?  In one last desperate attempt to connect with their own, the 2nd Mass has embarked on a perilous 500 mile journey to Charleston, Virginia where there is supposed to be an organized resistance.  If the intel is good, they could have a fighting chance.  But if the information is not valid, then this could indeed be a slow march towards certain death.

In the upcoming, August 5th episode entitled “Death March,” the 2nd Mass is slowly making their way south.  Separated from the convoy, Maggie, Hal and Pope try to keep their spirits up and their truck running with time running out.  Back at the convoy, Tom Mason, Anne, and Captain Weaver run across yet another abandoned child who may or may not be exactly as she seems.  The questions of who to trust and why become imperative — for the price of trust maybe lives or it could lead to a strong alliance.  Everyone is still reeling from the latest betrayal made by Karen who came back pretending to be their friend once again, only to try to lure Ben back to his alien captors.  Everyone is jumpy, too many lives have been lost, and yet if they do not fight to connect with each other, then the aliens have already won.

Then in the August 12th episode entitled “The Price of Greatness,” the 2nd Mass must navigate the thorny politics of a community which fears their confident independence.  Tom Mason also runs across an old friend who has decidedly different ideas on the best approach to keeping everyone alive.  There are those who believe in standing and fighting, while others prefer to hide in the shadows and not make waves and invoke the ire and attention of the aliens.  So while Tom thought he wanted a return to civilized society, when it shackles him and constrains him from taking the steps necessary to protect his family, he chafes under the inept ignorance of those content to live in fear.

Finally, in the August 19th finale entitled “A More Perfect Union,” things come to a boiling point.  With an offer they cannot refuse staring them in the face, Tom and the 2nd Mass must make a deadly decision that will cost lives. The final confrontation will be bloody, explosive, terrifying and tragic.  Then out in the darkness, another surprise awaits.  Just when you thought you could not possibly be surprised again, FALLING SKIES shows us that everything we thought we knew can change in an instant.

Be prepared for the unexpected, for FALLING SKIES still has a few tricks up its sleeve and no one is safe.