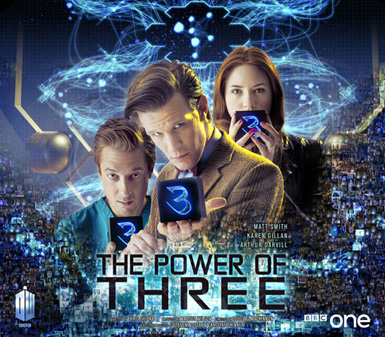 Fortunately in the “timey-wimey” world of DOCTOR WHO, goodbye is never forever.  The Doctor always leaves the TARDIS door open to his former companions, whether by bestowing them with a key, a cellphone or some other wonderful way to reach him.  But is the nature of the long-running science fiction show that as certain as The Doctor regenerates, each set of beloved companions only gets to partake of the fantastic adventures of DOCTOR WHO for a limited time.  After two spectacular seasons, the time has come to say goodbye to Amy Pond and Rory Williams, affectionately called “The Ponds” by The Doctor.

In order to give The Ponds a proper send-off, executive producer Steven Moffat chose to have each of the remaining five episodes of Season 7 be as big and grand and epic an adventure as befitting The Doctor’s newly ordained in-laws.  There will be Daleks, dinosaurs, a western, the return of UNIT, and the spine-chilling weeping angels.   Best known for his episode “Blink” which first introduced the weeping angels, and the subsequent two-parter “The Time of Angels” / “Flesh and Stone,” executive producer Steven Moffat could not resist the temptation to have Amy and Rory’s final adventure involve such a formidable foe; and episode 5 of Season 7 (appropriately entitled “The Angels Take Manhattan”) is the perfect moment to say goodbye.  As a special honor for “the A-Team of companions,” Steven created an adventure worthy of them.

When asked if The Ponds’ goodbye would invoke tears, Steven cheekily replied, “People who have seen the episode have cried.”  To which his co-executive producer Caroline added, “Genuinely, genuinely moving.  Huge episode. Most emotional read-thru ever.”  Even star Matt Smith described filming that final episode as “sad.”

Despite the outcry that it is too soon to part ways with two such beloved characters, Steven sagely noted,  “DOCTOR WHO survives; and it survives because of change.”  A television show nearing its fifth decade on the air cannot sustain itself by locking in actors ‘til the end of time.  It thrives because it has built in an escape-hatch – every couple of years The Doctor regenerates allowing a new actor to take on the weighty mantle, and new companions come and go helping to keep the storylines and characters feel fresh.  Originally conceived of as a children’s teaching show, DOCTOR WHO was intended to appeal to a younger audience and as it audience grew older, it allowed for a recasting to appeal to a new generation.

Yet an interesting thing happened along the way: DOCTOR WHO began to draw fans of all ages from across the globe.  It was not just a children’s show, or just a teaching show.  It was a glorious adventure and everyone wanted to travel with The Doctor.

Another controversial character getting to say goodbye this next season is River Song.  While it is debatable that The Doctor could ever really say goodbye to his wife (which we all heart-breakingly watched in Season 4’s “Forest of the Dead”), given that River is Amy and Rory’s daughter, no goodbye to the Ponds would ever be complete without River.  River made us laugh and cry and frequently exclaim with amazement over whatever shocking thing she had just done, but she also somehow found a place in our hearts and accordingly earns a place in the final goodbye to The Ponds.  In fact, Steven has called River Song, The Queen of Mischief for all her crazy antics. When asked if he would ever do an episode featuring the night journeys of The Doctor and River Song,   Steven noted with a twinkle in his eye, “It is very important for characters to keep secrets from their writers.”  He then impishly added, “And The Doctor is a gentleman and gentlemen never tell.”  So while Steven may be reluctant to dabble into the personal adventures of River and The Doctor, he has no qualms about bringing River back for the pivotal goodbye episode of The Ponds.  Just how Amy and Rory make their exit, we hope that the tears that fell during filming were for the goodbyes to the actors and not their characters.  It would be devastating to loose them too.

The DOCTOR WHO era under the masterful helm of Steven Moffat has led to one of the more romantic times in The Doctor’s time-travels.  Daring to introduce Amy Pond as “the girl who waited,” then bringing in her soulmate Rory as “the boy who waited,” and then carefully interweaving the clever story of River Song as their mischievous daughter who woos and later marries The Doctor, these past few seasons of DOCTOR WHO have felt like a beautiful love letter as words were being written across the page.  But in this case, the canvas was the television screen.  From Moffat’s pen to our TV screens, and the result was addictive, charming and utterly enchanting — with a few thrills and chills along the way.  Describing Moffat’s romanticism of DOCTOR WHO, star Matt Smith thoughtfully remarked, “Great romance is how Steven writes.  Wonderfully imaginative — and that is romantic in itself.”  He then noted that in the future DOCTOR WHO is “sure to be grand, with romantic notions in future and with action-adventures!”

It may be the end of The Ponds’ time with The Doctor, but as curious fans have already seen in the promotional photos, a new companion is hovering in the wings.  While the identity has been kept strictly under-wraps, the young actress Jenna Louise-Coleman is anxiously awaiting her debut in the 2012 Christmas special.  So more DOCTOR WHO adventures are soon to follow.

For now, we are content to enjoy the final five episodes with The Ponds and to relish each and every second of their time with The Doctor.  Bring on the Daleks, dinosaurs, the horse called Moonshine, UNIT and even those damned weeping angels.  The “A-Team” of DOCTOR WHO shall vanquish them all.  It is no longer the fate of Earth or the universe at stake, it is their own daughter’s future happiness – surely Amy and Rory are not going to let anything or anyone touch a hair on their son-in-law’s precious head.  As for The Doctor, this is but another chapter in a marvelous story of the last timelord surfing the sands of time in a bright blue box, known affectionately as the TARDIS. Geronimo!