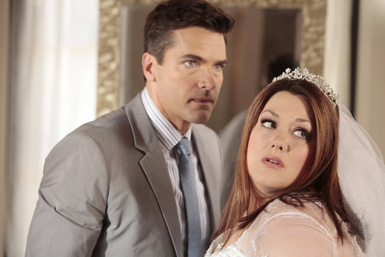 After its shocking cliffhanger last season, it is hard to imagine that DROP DEAD DIVA could pull off another whopping surprise; yet it did again spectacularly.  In last night’s fourth season finale, DROP DEAD DIVA brought back a character thought long gone and forgotten:  Jane Bingham (Brooke Elliott).  Not the Jane we all know and love — the young vivacious model Deb (Brooke D’Orsay) who inherited Jane’s body in the pilot episode of the series — but rather the Jane who jumped in front a bullet to save her boss, Parker’s life, thereby sacrificing her own and providing a body in need of soul which Deb just landed in after hitting the “return” button on her way to heaven.  For the past four seasons, we all thought that the original Jane was just simply gone, never to return.  But tonight, “original” Jane found a way back.  Unfortunately, it did not play out as expected.

As “new” Jane (aka: Deb) was happily making wedding plans and writing her wedding vows, “original” Jane was watching from heaven’s gate and clearly very unhappy with the choices Deb was making in Jane’s body.  The foreshadowing had been there from the first, Deb had never really wanted to acclimate to Jane’s body, but over the course of the past four seasons, Deb slowly became “new” Jane — a better version in that she had Deb’s fun-loving, whimsical nature with “original” Jane’s mental prowess and established legal career.  But Deb had continued to pine after her lost love, Grayson (Jackson Hurst), with whom she worked day in and day out at her law firm.  In fact, it was only after Deb saw Grayson kissing her best friend Stacy (April Bowlby) at the end of last season, that Deb (as Jane) rushed right out and got on a plane to Italy with new beau Owen French (Lex Medlin).  So this entire fourth season has been about the courtship of Owen and “new” Jane as they began building a life together.  Deb had finally let go of her old life and was moving on.  Or so we thought.

In those final moments of tonight’s episode as Grayson finally revealed that he had fallen in love with Jane, her heart betrayed her; and as she leaned in for a kiss unable to quite believe that the man she had loved as Deb had actually fallen in love with her as Jane, the world came crashing down around them (figuratively, that is).  Her fiancé Owen walked in at that fateful moment and, as he rushed to leave, he had another heart-attack.  While we cannot be certain that it was a fatal heart-attack, given the fact that “original” Jane had simultaneously pushed the “return” button in order to return to Earth and reclaim her life, there is a strong possibility that Owen’s body has now been hijacked by “original” Jane.  Particularly as Owen’s eyes opened and he uttered the words, “Where am I?”

With the fifth season not yet guaranteed as DROP DEAD DIVA awaits the news on whether it has been renewed for another season, we all are biting our nails wondering exactly what happened.  Is Owen truly dead?  Is “original” Jane now inhabiting his body?  Can this terrible mix-up be straightened out or will they all have to live with it?  With such big and mind-boggling questions hovering, we hope and pray that DROP DEAD DIVA has the opportunity to tell the tale of what’s next for Jane, Deb, Grayson and Owen.

DROP DEAD DIVA has always seemed like a light-weight fun-loving series about a young woman taught the powerful lesson of appreciating the life she has been given, whether it is her life or living someone else’s life — for life is a gift and more precious than we can imagine.  Given an unexpected second chance, Deb embraced her new life as “new” Jane and did a magnificent job.  Thus, it was a pleasure and a treat to watch the hilarious acclimation and melding of Deb and Jane’s lives into a beautiful new life.  We cheered and cried along with her as she struggled to find a balance and carve out a new life amongst her old and new friends in this new career field; and her unexpected gift became the gift that pays it forward — for “new” Jane helped as many people as she could with her new found skills and position.

DROP DEAD DIVA is not your average feel-good show.  It has cloaked itself in bright colors, exuberance, comedy and a zest for life; but at its core, it is a remarkable tale of second chances and how to make the most of an unexpected gift.  It is also about love and loss, and moving on.  DROP DEAD DIVA found a way to show us the value of love in our lives, both for ourselves and for those around us, and the need to be a part of something more — to give back.  It has made us smile with delight, scratch our heads at legal mysteries and quandaries, and it encouraged us to reevaluate our lives and to appreciate what we have been given.  Anyone of us could have been in Deb’s situation, snatched out of our lives prematurely and aching for a second chance.  It is a powerful thing to consider.  It has been a remarkable journey and one which we hope continues into the next season.  Until then, remember one thing:  cherish your life and those you love for you never know which day will be your last, and there may not be a “return” button awaiting you to give you a second chance.

Back in the DROP DEAD DIVA world, we have our fingers-crossed that season five will answer the question of what happened to Owen French.  Owen, Owen, where are thou?  We miss you.  ‘Til then, our hearts will await your return.