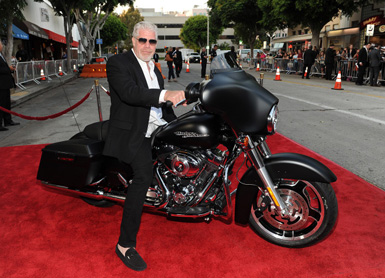 While creator Kurt Sutter is the first to acknowledge that SONS OF ANARCHY was originally loosely created based on Shakespeare’s “Hamlet,” as the show enters its fifth season, it should be acknowledged that it has risen to a level of something more — and something much more significant.  SONS OF ANARCHY is not just about a young man struggling under the weight of familial obligations and the chains that bonds a family together; it is a story about a young man in search of a family.  Jax Teller (Charlie Hunnam) may have been born the son of John and Gemma Teller (Katey Sagal), raised by Clay Morrow (Ron Perlman) and embraced as one of the SAMCRO, but in his heart he has yearned for something more and to be a part of something more.

The past four seasons has been the remarkable journey of Jax as he sought to define himself as a man and as he tried to figure out what family meant — and who it should include.  Following his heart and his instincts Jax pursued his true love Tara (Maggie Siff) and surrounded himself with men he trusted to be his brothers.  But his search also led him to wonder exactly what kind of relationship he had with his adoptive father Clay and his tenaciously protective mother Gemma.  Backdropped by the brutal and volatile world of SAMCRO, Jax has strained against conventional expectations and has fought to protect his chosen family at any cost.

So interestingly enough, Jax’s story is less about vengeance for the death of his father and more his desire to surround himself with love.  That is not the story of “Hamlet”; but it is the story of SONS OF ANARCHY.  It is also why millions of fans around the world have fallen in love with a show that by all rights should make us wonder why we are rooting for characters that normally would be seen as villains.  We care about them and we applaud their desire to protect their family at any cost.

In its first season, Jax pulled Tara into his life and worked to keep her safe by his side ever since.  In its second season, Jax put aside his differences with Clay in order to pursue justice for Gemma.  Then in its third season, Jax traveled the far corners of the earth to track down his kidnapped son.  Finally its fourth season, SONS OF ANARCHY pushed Jax to look at each person in his life and assess their real place in his “chosen” family.

When Tara was targeted by Clay, Jax was nearly driven to finally kill his step-father.  But recognizing that personal vengeance would only endanger the rest of his family, Jax set aside his anger and chose to protect those he loves yet again.  For he values the lives of his friends and brothers in SAMCRO above the burning desire to destroy the man who not only killed his father, but beat his mother to a bloody pulp and who authorized a professional hit on his wife.  Jax knew that succumbing to the desire to kill Clay would only destroy the rest of his family, with the CIA ready to reinstate the RICO investigation which would put each and every SAMCRO member in jail should Jax fail to keep the steady supply of weapons moving between the Irish mob and the Mexican cartel.  With the Irish mob refusing to do business with anyone but Clay, it became imperative to keep Clay alive — even though so many people wanted him dead, including Opie (Ryan Hurst) who wants payback for Clay killing his father.  But no matter what the sins of Clay Morrow, his time has not yet come to pay the reaper.  Keeping Clay alive keeps them all alive — and out of jail for a bit longer.

Yet season 5 is another story altogether.  The sins of the past have not only come back to haunt Clay, but each and every one of the SAMCRO members.  Their long-history of self-preservation, personal retribution, petty vengeance and general disregard for the justice system has put them all in the cross-hairs of fate.  It is said that “fate is a fickle bitch,” and that she is.  Because of the lie that Jax told thinking he was protecting his fellow SAMCRO brother, it only fueld the hatred of another SAMCRO member Tig (Kim Coates) — who was so blindingly angry over the fact that Clay had been shot and not knowing it was at the hands of one of their own — inadvertently ran over a young girl, the daughter of a powerful gangster.

Season 5 is all about “paying the devil his due.” Thus, Jax must carry the burden of all Clay’s wicked ways and bury the truth so that their strained SAMCRO family can hold itself together to face the upcoming trials and tribulations about to be rained down upon them in the name of Damon Pope (Harold Perrineau).  It is said that there is no greater crime than to attack a man’s family; and Tig’s ignorance and reckless act of killing Pope’s daughter has unleashed a world of pain that knows no end.

So this upcoming season will be about protecting one’s family and finding a way to heal the wounds inflicted upon them.  Jax shall be taxed to find more and more creative ways to keep his “chosen” family together.  SAMCRO is not just a brotherhood sharing similar ideals, interests and a way of life; it is family.  It is Jax’s family. Jax may not have always understood that, but when faced with the loss of his SAMCRO family and their fate in his hands, he will do whatever it takes to keep them all safe and free from harm.  This is his family — and pity the man that reigns terror upon them.

At a recent screening of the fifth season premiere, several of the cast took a few minutes to share their thoughts on their characters and the upcoming season of SONS OF ANARCHY.

You are not going to want to miss one second of the explosive start to another octane-fueled season of SONS OF ANARCHY, which returns for its fifth season on Tuesday, September 11th at 10PM on FX (and FX Canada).   But keep in mind, the devil has come to make all of them pay.