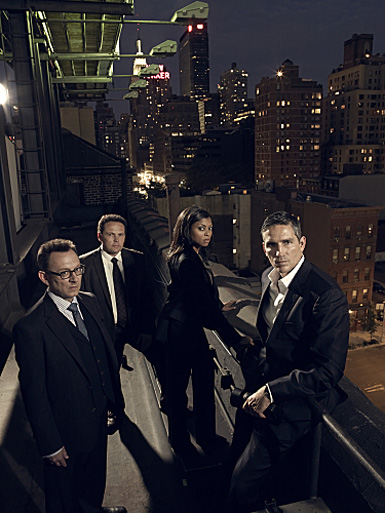 When the CBS series PERSON OF INTEREST debuted last year, it seemed like it was a pure procedural type of television series telling the stories of a hero rescuing people after a machine identified them a potential victim or perpetrator of a crime.  But as the season unfolded, much to fans’ curiosity, something else began to become much more apparent – this was not just a show about helping the innocent and ensuring the guilty were punished.  In fact, that was just the top layer of a very complex show about four lives intertwined by fate.  It was the tale of Harold Finch (Michael Emerson) and John Reese (Jim Caviezel), and their reluctant allies Detectives Carter (Taraji Henson) and Fusco (Kevin Chapman) — and an extraordinary destiny placed before them.

Then as we saw in the first season finale, another player entered the increasingly complex playing field:  The Machine.  Somewhere along the way, the machine that Harold Finch had created became much more than a computer calculating data and spitting out numbers.  It became self-aware; and PERSON OF INTEREST jumped right into the world of artificial intelligence.  It is no longer just about cameras watching our every move and audio recordings being synthesize for threat assessment; it is about all that data being recognized by an artificial entity capable of understanding human emotions in all its nuances.  Which means that the game is dramatically different now; and, unfortunately, someone figured it out.

There were always villains lying in wait, trying to figure out what Finch and Reese were up to and how they knew what they knew ahead of time; but it was not until Root (Amy Acker) entered their world that the reality of their own exposure became apparent.  Root brazenly targeted herself to lure Reese and Finch into her web of deceit and then sprung her deadly trap – kidnapping Finch right from under Reese’s nose.  It was brilliant and diabolical.  Yet as the villain was revealed, another interesting twist came to light: Reese turned to The Machine for help.  There had always been allusions that The Machine may not just be a sophisticated computer, but rather something more; and Reese’s acknowledgment of its own identity and intelligence blew the lid off that secret.

So it was with burning curiosity that the cast and creators were questioned at San Diego Comic-Con about this fascinating reveal with The Machine and the yet undetermined fate of Harold Finch.  See for yourself their interviews with each as they artfully dodged the more revealing plotlines of the upcoming season:

Fortunately, co-creators and executive producers Jonah Nolan and Greg Plageman were willing to share a bit more about the evolution of the show and what is next with The Machine.

As Jonah noted, the first season of PERSON OF INTEREST was focused on telling engaging stories each week while continuing to build their longer serial arc.  But to reward their fans and to keep things exciting, he acknowledged that they like to change the game from season to season; thereby change the rules a bit too.  They love delving into their four core characters and seeing how they interact with each other, as well as exploring the secrets each is keeping.  He also thought is fun watching them evolve from enemies to allies, and that is something they hope to keep in the show’s second season.  They want the relationships to shift as the situations the characters find themselves in shift; and they now want to add how their core relationships change with the addition of the fifth player in this game, their non-human character The Machine, who had been largely a silent partner in the show so far.

Jonah said that one of the greatest pleasures writing the show has been the dynamic between Reese and Finch; especially since PERSON OF INTEREST is more about people, than the case-of-the-week.  Yet with the addition of The Machine, it allowed for a natural environment to focus on a different person each week with the overall arc tying them together.

When asked about how quickly the Root problem (gloriously portrayed by Amy Acker) will be addressed, Jonah laughingly admitted that she is a formidable foe and as a result she will be around for several episodes in the second season.  Yet it will not all be about Root; there will also be a new regular character joining that is not human.

Greg added that while the first season explored the backstory of what happened to John Reese, the story we have not yet really seen is Harold Finch’s story – what made Harold into the man we now know?  What happened to Finch’s partner Nathan Ingram and how did Finch get his limp?

So the second season will explore who Harold Finch is, and they will also delve into what exactly is The Machine.  They will incorporate The Machine’s point of view and show that it can learn.   Greg noted that it is analogous to how we all have adapted to the smartphone.  Because we accept it as a given in our daily lives, artificial intelligence is an evolving science becoming much more a part of our lives than we care to acknowledge.  So while the overall question becomes how comfortable are we trading our privacy for security? We have to also look at:  is it a bad thing?  It’s not just the level of surveillance; but what is being transmitted on your phone and who is using that information.  While PERSON OF INTEREST does not want to be that didactic about it and moralize this potential Orwellian nightmare, they do want to recognize that it is a complex question:  we are in a very interesting era of the power of the machines and how they can take that information and use it.

Unable to reveal too much, stars Michael Emerson and Jim Caviezel were more circumspect about what fans can look forward to in the second season.  Michael teased that Finch gets out of the library more and is on the road at the beginning of the season; but a large part of that is due to the fact Finch is in the clutches of a madman.  He also admitted that there will also be more exploration the evolution of The Machine and its range of capabilities.  But then added that the idea of The Machine having an identity or personality is not too far fetched, but then we need to think about:  where does it get a personality from?  He thought that question leads to some interesting places.

As for the four of the central heroes having to work together more, particularly now that Finch is missing, Jim said that for Reese, Finch, Fusco and Carter, “Trust is a matter of survival,” and that assimilating all these hard-core loners together is for really for their common survival.  They are just beginning to see that there is a lot more going on than what they had one thought and how much more integral their role is amongst it.  And to truly survive, they must trust each other.

Beyond that, the cast was reluctant to share any more spoilers about the upcoming season out fear of being sent to the Bad Robot dungeon.

So to see exactly the origins and the extent of The Machine’s capabilities, whether Finch can escape Root’s clutches and how our heroes will find new and creative ways to work together and keep people safe, be sure to tune in for the second season of PERSON OF INTEREST when it returns on Thursday, September 27th at 9PM on CBS (CityTV in Canada)