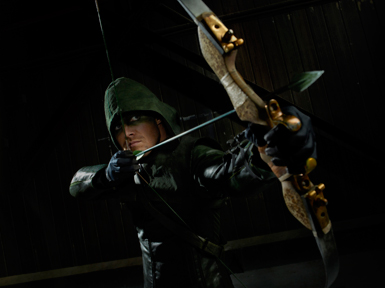 Premieres: Wednesday, October 10 at 8 p.m. on The CW (CTV Two in Canada).
In A Nutshell: After being shipwrecked on a deserted island for five years, wealthy playboy Oliver Queen returns with a desire to reconnect with his family, right his father’s wrongs and generally make the world a better place… beginning with his crime-ridden hometown of Starling City.
Names You’ll Know: CW mainstay Katie Cassidy (MELROSE PLACE, SUPERNATURAL) gives the usually thankless role of would-be girlfriend to the superhero some much-needed spunk, while Susanna Thompson (KINGS) is perfectly cast as the Medea-like matriarch of the Queen clan. Relative newbie Stephen Amell, meanwhile, proves he’s more than just a pretty face with a killer body by portraying three different stages of Oliver’s tale: his pre-island party-boy existence, his struggle to survive on the island, and his current double life.
What They Say: Of the fairly dark vision of the tale being told, executive producer Mark Guggenheim says, “We are certainly exploring the nature of vigilantism,” adding, “One of the things you will see… is that the Arrow… always gives the bad guy the opportunity to do the right thing, and that’s certainly one of the moral guidelines we’re establishing. But also, when he kills, he will kill for necessity, for a reason. It’s not random violence, and he will also have characters sort of coming into the universe that are questioning those moral judgments.”
What Others Say: Forget the critics. When ARROW was screened during Comic-Con in July, the show was greeted with wild applause from the very people who are both its target audience and, more often than not, the harshest critics of the genre.
What We Say: Perhaps because of the involvement of executive producer Greg Berlanti (EVERWOOD, POLITICAL ANIMALS), the dark drama is far more layered than one might expect. While SMALLVILLE gave its budding Superman a family and friends, ARROW’s Queen clan is much more fleshed out. This is emotionally complex, compelling stuff that has more in common with modern graphic novels than the comic books of old. The pilot does an admirable job of balancing action sequences (of which there are several), romance (the seeds for a juicy triangle are planted) and the kind of dysfunctional family drama one might expect to find on a show like REVENGE. If the episodes to come can deliver on the promise of the pilot, this could be the best superhero adaptation to ever hit the small screen.

For more great reviews, exclusive interviews with some of your favorite showrunners and actors, as well as printable calendars and Emmy ballots, please consider supporting theTVaddict.com by checking out our First Annual Fall TV Preview eBook.>>