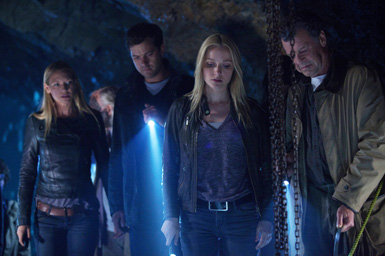 In last week’s tragic episode, “The Bullet That Saved the World,” another character’s life was claimed in the fight for the future.  It felt like we barely had time to get to know and appreciate Henrietta Bishop, affectionately known as Etta (Georgina Haig).  She had only a few precious days with her parents Olivia (Anna Torv) and Peter (Josh Jackson).  Yet in those few short episodes and that period after she rescued both of them from their amber graves, Etta became an integral part of the FRINGE verse.  Five episodes is all it took to win our hearts and make us now wonder how Peter and Olivia will be able to face the future, especially knowing that their daughter will not be a part of it.

It was like a sucker-punch.  Etta was supposed to be our heroes’ guide in the future and their savior to keep them safe from the omnipresent Observers.  She was the lifeline to give all of them hope that there was a future worth fighting for.  Etta was also their connection to the underground resistance movement. So the future is now uncertain and even more tenuous than before.

Our heroes, Peter, Olivia, Walter (John Noble), Astrid (Jasika Nicole) and Broyles (Lance Reddick), will certainly not back-down and will continue with their efforts to find a way to destroy the Observers, but at what cost?  As FRINGE moves forward with Episode 5 of its final thirteen episodes, we are beginning to suspect that more precious lives will be lost along the way.  The world is worth fighting for – now and in the future — but it is claiming a heavy price in the process.

Already robbed once of the chance to be parents, and assuming that both survive, would Olivia and Peter really want to have another child again knowing that the future could always be so uncertain and cruel?

FRINGE is a television show willing to take risks.  It knows that the world it has created is lethal and dangerous.  In the first season, Olivia lost her partner Charlie (Kirk Acevedo).  Then last season, we watched with horror as Captain Lincoln Lee in the alt-verse was struck down.  And while we had less time to get attached to Simon Foster (Henry Ian Cusik), it was still sad to see his final fate was to be decapitated and mercilessly experimented on by the Observers.  So it should have come as no shock when Etta was shot and then sacrificed herself to blow up the approaching Observers in order to give her parents a chance of escape.  It was hero’s death and one worthy of the daughter of Peter and Olivia Bishop; for time and time again Peter and Olivia have put their lives on the line in order to save the world and even the fate of two universes.  But somehow it felt too soon and too wrong to lose Etta just as soon as Peter and Olivia found her again.  21 years waiting and surviving and she could only be granted a few days to be reunited with her family?  So brutal and painful.

Etta was an anomaly.  Born of a father who did not originally exist in our universe, who had been stolen by Walter Bishop and brought back, and then erased from existence – only to refuse to let go and find a crack in time and push his way back again – Etta is a miracle to have ever been born.  She was also born of a mother who was prone to special abilities, abilities that may or may not have been inherited by Etta.  Etta certainly demonstrated a special ability to cloud her thoughts from the Observers.  That gift saved her and guaranteed that she would one day find a way to rescue her parents.   Yet it was not just Etta’s ability to pass unnoticed by the Observers that made her special; she had the ability to draw people to her.  She was a human magnet for the resistance and that skill combined with her natural intelligence made her an incalculable ally.  The girl was truly a secret weapon in the fight against the Observers.  So it seems ludicrous to kill off the one person that inspires Peter and Olivia to fight and who had such valuable abilities.  Such a risk with nine more episodes to go in the final journey of FRINGE seems wasteful.

Is Etta’s death to be the catalyst that propels Olivia and Peter to make every sacrifice needed to destroy the Observers? Would they have been too hesitant to risk their own lives knowing that they had already been robbed of a life with Etta before and did not want to lose out on the opportunity to share a life with her in the future?  Thus, must our heroes be stripped bare and rebuilt with tenacious resolve to make the Observers pay for their loss in order to succeed in their mission? It would seem that the answer to all these questions is a resounding affirmative.  As much as Etta was a resource and a weapon to use in the fight, she was also a liability.  Her presence alone would have bound the hearts of her parents and stopped them from doing anything and everything to win.

War is unpleasant, ugly, and cruel.  It spares no one.  Lives will be lost. Bodies will be broken. And families destroyed.  It is the price of winning.  Our heroes will win, of that there is no doubt.  But the price they will pay will be irreparable.  And that is what makes them heroes.  They will have sacrificed everything just so that others can have a future free of oppression and a chance at happiness.

But for today, we weep for their loss.  Etta was a child but for a moment in their lives; then she was an adult that they cherished for a handful of days.  The Bishops lost a piece of their heart, but the memory of their remarkable daughter will be forever engraved upon it.  To Etta: she may not be a bullet to save the world, but she will certainly be the reason the Bishops saved the world. A girl, a daughter, a grand-daughter, a friend and a human “bullet” to strike right into the heart of the Observers and crush them for eternity. May we remember her sacrifice.

New episodes of FRINGE air Fridays at 9PM on FOX (CityTV in Canada) and stars Anna Torv, Joshua Jackson, Lance Reddick, Blair Brown, Jasika Nicole and John Noble. Catch up with past episodes you may have missed for free online at clicktowatch.tv