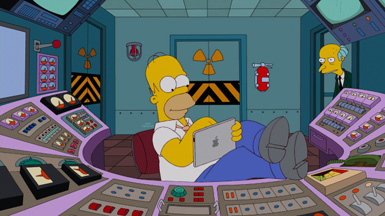 If for no other reason than there is nothing we love more than a good Apple Mapple parody, theTVaddict.com proudly presents your first look at the Sunday November 25th episode of THE SIMPSONS. Featuring a heavenly cameo by “Mapple” founder Steve Mobs, “A Tree Grows in Springfield” refers to a miracle tree that Flanders discovers in the Simpson’s backyard that gets Homer out of his funk after winning and subsequently losing a “Mapple” MyPad at a school auction. More first look photos of which can be found after the jump.

THE SIMPSONS airs Sundays at 8PM on FOX (Global TV in Canada) and features the voice talents of Dan Castellaneta, Julie Kavner, Nancy Cartwright, Yeardley Smith, Harry Shearer, Hank Azaria, Pamela Hayden, Tress MacNeille and more. Catch up on past episodes you may have missed for free online at clicktowatch.tv