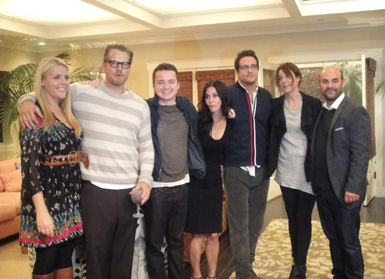 Roaring back onto television screens on January 8th on its new network TBS, the fun-loving antics of our favorite Cul-de-Sac Crew return to tickle our funny-bones and delight us with their charming escapades.  COUGAR TOWN has long since embraced its misnamed moniker and continues to poke fun at its name while striving to tell the stories of a fun bunch of friends and family living in fictional Gulf Haven, Florida.  When last seen in its 3rd season finale, neighbors turned love-birds Jules Cobb (Courteney Cox) and Grayson Ellis (Josh Hopkins) tied the knot in a sentimentally beautiful ceremony on the beach.

During a special cocktail celebration, the producers and cast shared a few hints about what the 4th season will offer for COUGAR TOWN while mercilessly teasing each other about their on-screen counterparts.

Here is what we learned from the rambunctious bunch of thespians:

Josh Hopkins is the Penny Can King.  As agreed unanimously by his castmates, Josh has nailed the perfect technique for pitching pennies into the tricky silver paint cans.  In fact, he demonstrated his physical prowess and emphasized the need to use an over throw versus the under throw to get a perfect score.  After such an ample demonstration, Josh clearly reigns undisputed as king of the Penny Can.

Brian Van Holt is surprisingly camera shy.  He would artfully dodge sneaky camera shots with a sly smile on every occasion.  But then when the cast was called for group photos, Brian surprised us all by being the biggest ham of the bunch beaming his megawatt smile on everyone.

Ian Gomez is a proud papa and family man.  Taking every opportunity to glowingly rave about his young daughter, Ian is clearly besotted and a very happy man.  When asked about his plans for the break after COUGAR TOWN finishes for its current season, Ian said his main goal was to find work close to home so he could spend more time with his family.  Gotta love a man with such laud-worthy priorities!

Dan Byrd wants to be adopted by Courteney Cox.  The Jules-Travis relationship is a beautiful thing to behold in COUGAR TOWN and surely some of that familial love and affection has rubbed off on Dan who seems to think that he is Courteney’s favorite child – to which she smilingly reminded him that Coco holds that place firmly in her heart.  Dan was a good sport about it and continued to rib her about that he’ll always be her favorite.

Busy Philipps loves her TV shows.  When asked about what she is currently watching on television, Busy was quick to rattle off a large number of favorites.  Topping the list were MAD MEN and THE MINDY PROJECT, and she gave a special nod for her former DAWSON’S CREEK castmate James Van Der Beek’s new series DON’T TRUST THE B—IN APARTMENT 23.  Busy hilariously recounted working on APARTMENT 23 this season spoofing the ongoing rumors of a DAWSON’S CREEK reunion.  Busy also gave a nice shout-out to fellow TBS show WEDDING BAND, noting that Harold Perrineau has a voice that makes her cry every time she hears him sing.  (Yes, he is THAT good.)

Courteney Cox is the watchful mother-hen of the cast.  It seemed as if everywhere Courteney went she was looking to share a quiet, appreciative word with one of her castmates or others who work on the show.  She would also check on everyone and see how they were doing and if they were having a good time – including the precocious Coco who was luring people into wicked games of Penny Can.

Christa Miller is everywhere.  She moves fast, shares a quick smile, offers a brief anecdote and then seamlessly glides on; but the second a camera is out, she vanishes.  She is gifted in the art of evasive maneuvering and yet is the gracious queen in the midst of it all.

Bill Lawrence loves to talk about COUGAR TOWN.  Bill took the time to talk with everyone, practically talking himself hoarse in the process.  One has to admire a man that dedicated and passionate about his show.

Kevin Biegel is the life of the party.  No matter where Kevin went, everyone around him seemed to have a grand time chatting with him.

TBS is ecstatic to have landed COUGAR TOWN for its new roster of hot shows.  Everywhere one looked there were special touches added to the set by TBS in honor of the show.  They had special pillows made to decorate Grayson’s bar.  They brought bunches of Krazy Kakes for Laurie’s bakery.  They had special cocktails circulating non-stop named after the show’s flavorful characters – each more yummy than the last.

These are just a few glimpses for a fun night chatting with a cast that clearly loves their show.  COUGAR TOWN may have a new home on TBS, but for them it has been a seamless and easy transition.  They have each other, they have their warm and welcoming set populated with their crew and writers, and they have a show that they are inordinately proud of – and they cannot wait for the rest of their fans and viewing audience to see all the outrageous antics they have in store for the 4th season.

They welcome everyone to tune in for their 4th season premiere on Tuesday, January 8th at 10:00 p.m. on TBS.  TBS promises shows that are “very funny,” and as long-time fans of COUGAR TOWN already know, it is definitely that.  Join the Cul-de-Sac Crew for their best season yet starting on January 8th. Photo Credits: Tiffany Vogt