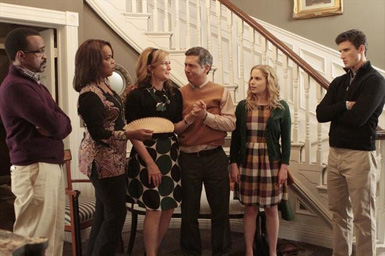 For Ryan Shay (Parker Young), life will never be the same as he knew it.  Before the holiday break, Ryan found out that his parents Sheila (Ana Gasteyer) and Fred (Chris Parnell) had adopted him and Ryan’s reaction was understandably strong.  In fact, he had a major freak-out attack, which led him to test what was real around him by kicking various street posts, finally forcing him to as if he were running from a truth he could not bear.  Ryan’s life will never be the same.  He had been living comfortably content as a Shay, knowing who his parents were and that he was related to his sister Lisa (Allie Grant).  But once one finds out that the family they thought was theirs is actually not, reality seems to shift.  Ryan began to doubt his own reality and realness.  It made perfect sense.  But life should not make you doubt your on existence and the relationships to those closest to you.  In true SUBURGATORY fashion, Ryan’s reaction was both hilarious and heart-breaking.  We ached for the golden boy whose world had been shattered by the mere word “adoption.”

So as SUBURGATORY returns from its brief hiatus with the new episode entitled “Black Thai,” we find Ryan hiding out with Malik’s family.  Believing that he should be entitled to choose the family he wants, Ryan tries to settle in with Malik (Maestro Harrell), much to the dismay of Sheila and Fred.  The episode explores what it means to be a family and what value we place on them in being a part of our lives.  In the process the show manages to convey in the most comedically and yet touching way, that family is something we are born into whether by blood or by bond.  Ryan may not have a blood connection to his parents, but the bond they share is stronger because of their mutual love.  It just takes a little time for Ryan to figure that out, but he will find out the the “proof is in the pudding.”  Look for a funny food fetish to open his eyes and reunite the fractured family.

Also look for fun appearances by Tim Meadows and Paula Newsome portraying Malik’s parents and a glimpse into their privileged world as never seen before in SUBUGATORY.   Lest fans worry, there is indeed a part to be played by Tessa (Jane Levy), George (Jeremy Sisto), Dalia (Carly Chaikin) and Dallas (Cheryl Hines) in this little Shakespearian drama.  For Tessa and Dalia know perfectly well the value of having parents that love you unconditionally and who will fight to keep they love close.

SUBUGATORY may be a comedy show, but it knows how to aim for the heart and deliver an episode that will touch yours.  Be sure to tune in for this fine episode on Wednesday, January 9, 2013 at 9:30 pm on ABC (CityTV in Canada).  Ryan will learn that home is truly where the heart is.