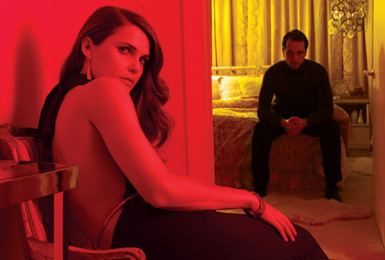 Combining the crazy idea of “your neighbors next door could be spies” with the actual “cold war” in which the U.S. found itself in the early 1980’s, FX offers the new drama series THE AMERICANS.   Starring Keri Russell and Matthew Rhys as KGB “sleeper” agents who have been posing as a happily married couple with two kids for the past 10 years, the difficult part watching the show will be to remember that they are not the good-guys.  But try as you might, THE AMERICANS is going to get you rooting for Russell and Rhys’ characters before you know it.  Portraying Elizabeth and Philip Jennings, they look like the average couple-next-door.  Yet, as will soon be apparent, they are not.  For one, they have a kidnapped man in the trunk of their car.  That is just not something you would expect to find in a quiet, sleepy suburban neighborhood.

This is genius of THE AMERICANS.  “Sleeper” agents are supposed to look and act just like everyone else.  The good ones go unnoticed for decades.

But the wrinkle in the Jennings’ lives is when a FBI agent moves in right next-door.  “Sleeper” status or not, their new neighbor poses a risk that they cannot afford at this critical juncture of their lives – just when their “sleeper” status has been revoked and they have been put on active duty.  How are they supposed to be doing active assignments with a neighbor fine-tuned to sniff out spies?

Plus, FBI analyst Stan Beeman, fantastically portrayed by Noah Emmerich, is good at his job.  It would seem impossible that he would not have any suspicion of his neighbors and their mysterious goings-on right next door.

The other unexpected element to this series is the fact that Philip and Elizabeth, while married and with kids, are virtual strangers.  They have been living together for 10 years and yet know next to nothing about each other; because their lives before they were married was a blank slate.   So just as things start to get tense in the lives of the Jennings, they discover something else – the stirrings of passion.  It had been easy to live their routine lives barely noticing each other for a decade as long as they were inactive.  But with the flip of a switch, suddenly thrust out into active duty changes everything for them.  The risks are high, their lives are at stake and their futures are uncertain minute by minute.  They can no longer be so blissfully unaware of their partner and a slow love starts to blossom.

Bear in mind, THE AMERICANS is not a warm and fuzzy kind of show.  Sex and nudity are tricks of the trade for spies, as is the prevalence of brutal violence, and the show does not shirk from either of those elements.

Despite its brutality and frank sexuality, THE AMERICANS is an enthralling look through the eyes of two “sleeper” agents who suddenly have a lot to lose if caught.  Pressured by their superiors to deliver on assignments, pressured by a tightening noose of FBI operatives looking for spies, and pressured by their friendly new neighbor, Elizabeth and Philip are stretched to the breaking point – and did I mention that they have someone tied up in the trunk of their car?!

However, the real quandary is not whether Philip and Elizabeth will eventually be caught, but is it okay for viewers to root for them to succeed in their missions?  Likeable, charming and, at times, seductive, it is impossible to not root for them.  We want these KGB-agents to be successful and to live happily ever after.  Yet will that be possible with so many external forces chipping away at their lives and reminding them that their past lives, loyalties and loves may haunt them forever?

To see the intriguing and captivating world of Philip and Elizabeth Jennings, two KGB agents determined to bring down our government one assignment at a time, be sure to tune in for the 97-minute premiere of THE AMERICANS on Wednesday, January 30th at 10PM on FX (and FX Canada). (That’s right, the premiere runs in excess of 90-minutes, set your DVR’s accordingly.)