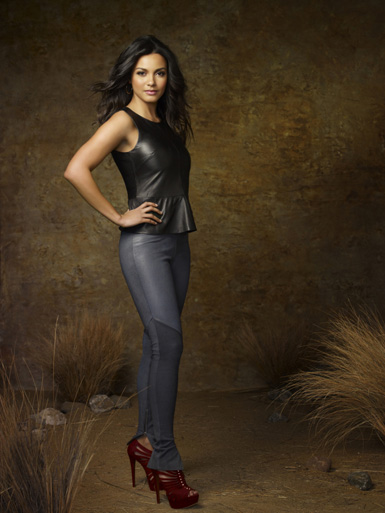 Just a few episodes in and the body count is rising on the new thriller series CULT.  The series focuses on fan obsession and the lengths it can drive them as they attempt to make a fictional world created for a television show real in their own lives.  In an exclusive interview, co-star Jessica Lucas shared her fascination with the dual lives portrayed and all the craziness that arises as a result in CULT.

Where is the crazy world of CULT taking us?
JESSICA:  On a wild, wild ride, that’s for sure.  There’s a lot going on.  The main over-arching story is: Where did Jeff’s brother Nate go? And who is Steven Rae and why is the “cult” such a mysterious organization behind the show? So those questions will be driving us forward this season.

The show feels like it gets to an intense level right away and we know it’s going to be a high-octane show and it’s not going to let you breathe very much.  Were you ready for that kind of role?  An action role that is so intense?
JESSICA:  Yeah, it was something really exciting for me to sinking my teeth into.  I’ve never worked this much on a show and that was a challenge in and of itself.  And I think another challenge is in a show like this you don’t know the bigger picture.  You don’t know where your character is going.  So you just have to have trust and faith in the creator and hope that they are steering you in the right direction.  That was a really interesting challenge.

What about Skye can you share?  Who is she?  How does she get into this world? And how does she connect up with Matt Davis’s character Jeff?
JESSICA:  I think in the pilot episode you’re not sure what her intentions are.  She latches onto Jeff so easily. But there is a reason that will be revealed in the next episode.  She’s actually been looking into “Cult” for a while and you find out why.  I think once you know her true motivations, it makes sense.

Besides working with Matt, did you get much of a chance to work with Alona Tal and Robert Knepper’s characters?
JESSICA:  Yes, a little bit.  But, you know what?  Not much.  It was like we were working on two different shows.  We would spend time together off set, but it was a little crazy.

It seems the show-within-a-show keeps you all in separate worlds.
JESSICA:  Yeah, we are in separate worlds.  But Skye definitely has more interactions with Alona and Robert’s characters because she works with Marti and Roger, the actors.  So Skye and Marti sort of strike up a friendship. So that was something cool in the series too.

What did you find to be the funnest thing to do as Skye?
JESSICA:  Everything was always so intense.  But in Episode 6, something happens to Skye at a party and she ends up in the hospital.  The whole episode was quite trippy and out-there, and I got to explore a lot of crazy, wild things that are cool.  So Episode 6 is a great episode for Skye.

Has the fact that the show films in Vancouver been a challenge for you?
JESSICA:  I’m from Vancouver so I absolutely love working there.  It was nice for me to be home again, with my parents living 20 minutes from me and to see all my friends again.

Because the show is kind of a paranoid-based type show, do you get those kinds of feelings and vibes when you leave the set?  Like, “Oh my god, I’ve got to watch out for all these cameras that might be hidden all around?”
JESSICA: (Laughs) No.  Well, Matt and I used to joke about whether there were cameras in our trailers.  It does make you think like that.  But mostly it’s just fun to play with that paranoia.

Have you been able to see any of the finalized episodes of the show yet?
JESSICA:  I have seen a few.  It’s very cool to see how all the different storylines come together. I think it plays well and I’m excited to see more of it.

Did you find that the show has some more physical aspects as well, with stunts and such?
JESSICA:  I actually didn’t do a lot of physicality.  But in Episode 6, I was out in a big open field and I had to do a lot of running — a lot of running and the biggest challenge was doing it in high heels. (Laughs)

Are you nudging the writers to write more action scenes in for Skye?
JESSICA:  I would love that and I think it would make sense.  ‘Cause in future seasons, who knows who Skye may have to defend herself against.

If you were to use one word to describe Skye, what would it be and why?
JESSICA:  Tenacious.  I think she’s just very determined and who has a very specific goal in mind. Once she’s set her mind on it, she’ll stop at nothing to get answers.  I admire that in her.

To see where the murky and mysterious world of CULT leads, be sure to tune in Friday nights at 9PM on The CW (Tuesdays at 8PM on CTV Two in Canada)