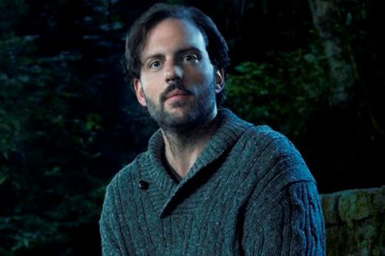 With the unsuspecting human world perhaps on the verge of discovering that Wesen live amongst them and the erupting chaos that would ensue, the precarious balance of secrets in GRIMM are set to topple.  In a recent press conference call, co-star Silas Weir Mitchell shared where he sees his character Monroe fitting into the GRIMM jig-saw puzzle of relationships and forces at work.  He also weighed in on the slowly blossoming Monroe/Rosalee romance.

Can you give some hints as to what might be happening with Rosalee??
SILAS:  Well, Rosalee is back, which is delightful, and we sort of we hang out at the spice shop. There’s these different groups in the story. There’s the Grimms, although there’s really only one. Then there’s the Wesens. Then there’s subgroups of the Wesen. Then the Royals. Then there’s the Varrock. And there’s all these kind of forces at work. So Rosalee and I are sort of at the center of that. As far as romance goes, it’s a slow burn but there’s definitely an attraction there. Like we get something we need from each other for sure. We have both have a lot of similarities, and I think we’re both sort of damaged and we’re tip toeing towards the end of the diving board.

It has been fun watching Monroe try to run the spice shop while Rosalee has been away. Now that she’s back, will he continue to be involved in the business??
SILAS:   Probably. I mean I think it’s her shop, but it’s also group effort at this point.  I’m learning and she needs the help, and it’s a nice place to work. I think that you can probably count on seeing Monroe in the spice shop along with Rosalee a fair amount. It’s their little hideout.

Do we know if there is a Wesen code against interspecies relationships? Is that something that’s going to be discussed at any point in the show??
SILAS:  That’s a very interesting question, but I would have to say I don’t really know. I can’t say that we’ve discussed the rules surrounding that. I think that there probably isn’t because there’s a lot of us out there.  You just don’t know who we are. And if Blutbad always had to be with a Blutbad, I think that would be onerous.

What’s the Wesen Code of Honor??
SILAS:  Well, it’s just that the Rule that you’re really not supposed to show your inner-self in order to take advantage of the normal people in the world. It’s immoral and it also could sort of tear at the fabric of reality for people. It’s a big no-no because it exposes too much of the way the world really works, and the Wesen have to behave a certain way and, f you go outside of that, you are in big trouble.

Now that the “cat’s out of the bag” and, Hank and Monroe will be spending more time together, will they develop a stronger friendship??
SILAS:  Yes, the three of us definitely start to have more time together.

Monroe is happier than when we first met him when he seemed a little more isolated. Do you think he’s happier Blutbad now in season two??
SILAS:    That’s very perceptive of you actually. I do think that Monroe is happier. I think that Nick has forced him out of his little cave and now he’s nosing around in the world. And I think its kind of fun out there.  Like he’s got a girlfriend and he has little adventures that he does with his weird pal, Nick. I think that the whole idea of doing good in the world — that’s how it wound up making sense to me — that he came out of his little world of clocks and maps and things and he was doing good in the world. And if it’s with a Grimm so be it. He’s not going to stand aside and let bad things happen just because Nick’s a Grimm. Because Nick’s a different kind of Grimm and I’m okay with that. And I think it’s nice to be able to behave and live in the world.

Nick and Captain Renard are going to sort of an uneasy alliance going forward. How is that going to affect Monroe and Nick’s relationship with Monroe? Is he going to be sort of brought into that loop??
SILAS:   Yes, all I can say is that in the normal run of things Monroe wouldn’t necessarily be hanging out with the chief of police. And yet being one of Nick’s allies and having already met the chief of police not knowing he’s the chief of police when he came in to deal with his obsession — they’re a couple of moments where I’m in the precinct just because I’m helping Nick out or whatever. So, yes.

Out of curiosity, when Monroe turns into a Blutbad, is there anything that you as an actor has to do or is it all done by special effects??
SILAS: No, there’s definitely stuff that I do as an actor that involves a mentality shift and there’s a physical shift. The CGI is so advanced now that it follows along with your facial expressions. So if I have to say something, if I’m scared versus angry — because we morph when we’re under situations under which a Wesen will reveal himself, and one of them is aggressive and angry, purposeful morph – then if you’re really sad or scared or nervous, your inner-self will burst out because your guard is down. So in the event that you do it one way versus the other, you’re going to have a different aspect and the CGI is able to capture that. So it’s not just a big thing that goes on top of you and obfuscates your emotional life. It’s prime enough that it can see what you’re feeling.  It can react to your face.

Other than Blutbad, do you have a favorite Wesen??
SILAS: I just like their names like the Volksdevil is one that’s coming up. I think he’s sort of Rumplestiltskin character. It’s just a fun name. I did like there was a bat creature that I really thought looked good — the Murciélago because that was not all CGI — that was mostly practical. When it’s practical and enhanced by CGI that’s really the best. Wen it’s 80% practical and 20% CGI it looks better than when it’s mostly CGI, in my humble opinion.

What have been some of your favorite fight scenes to shoot??
SILAS: I haven’t really had that many fight scenes. I kind of lunge and attack and it’s gets done with quickly because I dispatch whatever needs to be dispatched with rapidity. Last year the most sort of involved fight scene I was in was the cage fighting. That was pretty intense. We had a bunch of background actors kind of screaming and yelling and we were out in a barn way out in the woods. I mean it was pretty intense.

Is there some reason that you think that people keep coming to you for the kind of darker, more serious types of roles??
SILAS:  That’s a really good question and I think it it has a lot to do with physiognomy being a part of it. Just that I’m tall and dark and “glowering.” But my inner-life is sort of — that’s why Monroe is a great character for me — because my inner life is not like that. I just have access to it because I’m actor. We should all have access to everything. That’s what our job is to live in imaginary world. Whatever that calls for, we need to have an elastic inner life, an elastic imagination like an acrobat. So I don’t know. I couldn’t say exactly why except that I mean tall, dark, and once see me do it they go, “Oh, he can do it.” But as far as being on a madcap sitcom, I think Monroe is as madcap as it needs to get for me.  Monroe is really fun for me if Monroe is equally heavy duty. Like he’ll rip your head off. But also I don’t like violence so it’s really fun to live in that kind of inner special kind of world where it could go either way.  For with Monore, you never quite knowhow it’s going to go, which is what makes him fun to live in.

Monroe seems to get all the best lines followed by Sergeant Wu. Do you ever get to help the writers and contribute to that sense of humor? And do you enjoy that??
SILAS:  Yes, I do. I do enjoy it very much. Monroe is a really fun mind-space to live in. And he does get very fun lines. The only way I could say that I help the writers is if I happen to catch some minor inconsistency that is the type of thing that actors always find because we dive all the way into it, and writers can only go so deeply into each characters narrative. I used to pester the writers in the first season.

Why do you think audiences are drawn to these supernatural shows?
SILAS:  That’s an interesting question. I think people enjoy being scared and I think that’s part of what’s fun about GRIMM is.  That we continue to try to make every episode have something in that. That’s either going to make you jump or turn away or close your eyes and look through your fingers. So I think people enjoy that. That’s why horror movies are big business. As far as the supernatural thing goes, it’s just there’s a certain segment of the population and there’s a certain type people call them genre stories. There’s always going to be a type of storytelling that allows a person (both the writer and the reader or the creator and the spectator) to paint with a broader brush in a way and imagine the world in a way that it could be but we don’t see it as being that way.  I think that’s exciting for people to operate from.  Just the premise that the world is slightly other than what we see. It’s still recognizable, but it’s other. I think that there’s always going to be a segment of the population that wants to experience that type of reality as opposed to something that’s just taking place like a lawyer show or a hospital show. There’s always going to be people that want to imagine the world as slightly tweaked.

To see more of the challenges facing Nick, Monroe and all our heroes in GRIMM, be sure to tune for all new episodes on Friday nights at 9:00 p.m. on NBC.