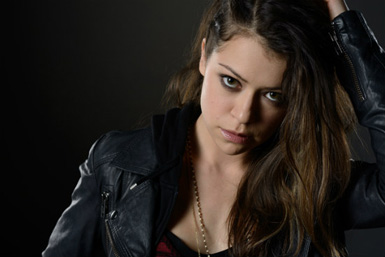 Whatever we were expecting about a show that features clones, we certainly were not expecting ORPHAN BLACK to whip out the twins card too. When Sarah’s (Tatiana Maslany) birth mother finally makes an appearance, it is not the fact that she was a mere surrogate that gets our attention, but rather the critical piece of information that she carried two babies to birth – she had twins. That’s right, that special bond between Helena and Sarah was more than just the clone DNA drawing them together, it was their twin-bond. The clever birth mother sought to protect the babies she carried, so she gave one to the state and one to the church. It probably seemed like a reasonable and safe option at the time. But years later, after seeing how Helena fared growing up under a radical regime through the church, that decision seems a bit dubious. Even Helena would not wish such an upbringing on a child as she literally fought tooth and nail to ensure that little Kira (Skyler Wexler) would not suffer the same fate under the harsh, maniacal tutelage of Thomas (Daniel Kash).

Looking back over the first season of ORPHAN BLACK, one is not sure which of the multitude of shocking surprises was the biggest. One clearly remembers the startling moment that Beth calmly stepped in front of a train – thereby opening the door for Sarah to assume her life. Then there was the surprise that Beth was a cop and, worse yet, had killed a woman to protect the secret of clone club. Oh yeah, clone club was a big surprise too as Sarah began to unravel the mystery of Beth, and met Katja only to have Katja’s brain blown to bits right in front of her. After witnessing the brutal, unexpected deaths of two women that looked enough like her to be her twins, Sarah had begun to suspect there was a lot more going on than she knew. Then she came face to face with Katja’s killer, the insane Helena – yet another clone whose mental grasp on reality seemed tenuous at best. Then rounding out the known clones were Cosima and Alison – each with their own fair share of love-life drama. And how dare we forget those scorching hot sex scenes that Sarah had with Beth’s boyfriend Paul (Dylan Bruce), or that Paul turned out to be an ex-military monitor sent to spy on Beth/Sarah. Monitors — the word alone sounds so innocuous, but counterbalancing the startling discovery that there were 10 clones running around all sharing Sarah’s face, which even Paul did not know about. Plus, don’t get us started on Dr. Leekie (Matt Frewer), the Neolutionists, and that disconcerting tail. Shudder.

But just as soon as we had wrapped our brains around the idea of clones, monitors, and using sex as a weapon to seduce enemies into allies – then came the sibling card. We knew from the first episode that Sarah and Felix (Jordan Gavaris), for all their sibling bickering were not related — though blood is not necessary thicker as in their case as they have proven they will literally do anything to protect each other. The real shocker was last week’s revelation that crazy Helena was Sarah’s biological twin. Imagine: a clone with a twin. It seems inconceivable. But then again, fully functional human clones should be impossible too.

And no one seems to have a clue how Sarah was able to give birth to Kira, or why Kira could virtually walk away from being hit by a car with nary a scratch on her. All the genenic DNA splicing and DNA manipulation clearly had brought about a few miracles. Clones with twins and clones having children. Wow. Does it go towards the theory that no matter how much man tinkers with genetics, the miracle of life and natural order will still win out?

All the high concepts involving chemistry, biology and genetic research is enough to make an average person’s head swim. But putting aside all the advanced science in this crazy story, there are still lots of other issues hovering about relationships with life-partners, siblings, quasi-parents and children. Cosima, Sarah and even Beth all allowed themselves to get involved with people who they knew were spying on them – their monitors. And Alison, despite marrying her high school sweetheart had allowed her marriage to spiral out of control. As for the parental relationships, Mrs. S (Maria Doyle Kennedy) may be the safest one of the bunch, but Thomas and Dr. Leekie are clearly not living up to their responsibilities as quasi-parents as they put their personal crusades and scientific desires above the well-being of the clones. Clones are people too after all. Particularly as the clone version of sibling relationships is quite a bit stronger than the bonds with any of the parent figures in their lives.

So clones, siblings and quasi-parental figures. Where does that leave twins? Growing up an orphan in a foster family, Sarah has never really had a sister before. She adapted quite easily to having clone faux-sisters, but what about a twin? And a biologically-related one at that? Is Sarah truly ready for a twin clone sister?! Not to mention one as unhinged as Helena? As Ms. S noted, it really is a good thing Sarah did not put a bullet in Helena’s head. She needs to take a few moments to wrap her brain around the fact that she and Helena are related by more than genetically-altered DNA. Plus, that bond just could be the saving of Helena from her slow decent into mental madness.

Also before we forget, the police are hot on Sarah’s trail now that they have figured out that Sarah assumed Beth’s identity and obstructed as much of the official police investigation into Beth’s shooting, Beth’s death and the murder of Katja — the unfortunate German clone that Sarah buried near a rock quarry after Helena shot and killed her. Unlike Dr. Leekie, who claims to just want to study and monitor the clones, and unlike Thomas, who wants each and every clone wiped off the face of the planet, the cops want to prosecute someone (anyone) for all the crimes currently posted on their murder wall. But should Helena be held accountable for the religious zealotry and indoctrination of Thomas? Helena was just the tool, which he wielded for his own agenda. And should Sarah be held accountable for Beth’s cold-blooded killing of Maggie Chen? In this increasingly labyrinthine series, who should be held accountable for what?

With the truth slowly leaking out and the secret of clone club coming to light, soon everyone will know exactly what is going on. We are hopeful that this week’s Season 1 finale “Endless Forms Most Beautiful” will provide some closure on these questions. But with a second season ordered for ORPHAN BLACK, they may have left a door cracked open to ensure viewers return for a second dose of clone club next year.

To see who may take the fall for murder, be sure to tune in for the 1st season finale of ORPHAN BLACK on Saturday, June 1st at 9PM on BBC America (Space in Canada).