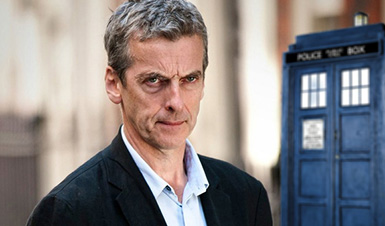 First I want to say that I have been a DOCTOR WHO fan since the early ’80’s when Tom Baker was my Doctor.  Over the past decades, I have been a loyal and cheerleading fan, loving each reincarnation of the Fourth Doctor through the Eleventh Doctor.  I also remain optimistic about the Twelfth Doctor, who was just recently announced as being portrayed by Peter Capaldi. But tempering my excitement over the recent casting choice was the realization that DOCTOR WHO made the wrong choice.  With lots of factions vying for the first female or non-white Doctor, there was certainly a lot of interest in stepping outside of the box in choosing who would portray the Twelfth Doctor.  There was also a lot of interest in keeping the role youth-oriented.

So last Sunday at precisely the designated time, I sat amongst friends as we huddle around a laptop streaming the BBC announcement of who the Twelfth Doctor would be — and the announcement was met with dead silence.  No whoops of joy and excitement, just nothingness.  Peter Capaldi is certainly a fine choice, especially given his DOCTOR WHO ties and his sterling performance in TORCHWOOD: Children of Earth.  But there is one glaring problem:  he’s just too old.  It seems cruel and ridiculous that a man of 55 years of age would be too old to play The Doctor, particularly when the First Doctor William Hartnell was 55 as well.  But in recent years (the critical years), each of The Doctors was portrayed by increasingly young actors.  Christopher Eccleston was 41, David Tennant was 34, and Matt Smith was 27 when all were originally cast for their brief tenures as The Doctor.  It was imperative that DOCTOR WHO stay on course and cast another younger actor.  Why? Because in our world today, youth rules.   Ask any actor who has hit their 40’s and you’ll hear the same thing: the roles are a lot harder to get.  Ageism is alive in well in the entertainment industry, especially in film and television.

After DOCTOR WHO went on its 16 year hiatus between 1989 and 2005 (not counting the 1996 film version with Paul McGann since it barely registered with fans and failed to relaunch the franchise), it seemed to hibernate due to lack of interest.  But what the BBC and Russell T Davies understood in 2005 was that it was vital to cast a young actor.  It can be argued that since Christopher Eccleston was 41 years of age, they were not casting all that much younger.  But Christopher certainly gave off a very youthful vibe, one that has continued through the casting of David Tennant and Matt Smith; and Matt was actually 14 years young than Christopher upon taking on the mantle of The Doctor.

Why am I emphasizing the age-factor?  Because it matters.  American audiences had never truly embraced the British series DOCTOR WHO until the era of David Tennant, and DOCTOR WHO only became a phenomenon widely-embraced in the U.S. during Matt Smith’s tenure as The Doctor.  What made the difference were the geek fan-girls.  David and Matt brought enormous amounts of sex appeal to the role.  Being younger and more youthful, teenage girls and Millennials in their 20’s suddenly fell head-over-heels for The Doctor — and the top U.S. magazines took notice.  For the first time ever, DOCTOR WHO was on the cover of TV Guide and Entertainment Weekly.  Any TV show knows they have made the U.S. zeitgeist when they can achieve that level of notoriety.  The tipping point was sex appeal.  Russell T Davies exploited all the natural charm and appeal of David Tennant and wrote a poignant love story for David’s tenure as The Doctor.  The love story of The Doctor and Rose had captured the hearts and imaginations of fan-girls of all ages. The internet was abuzz with fan fiction, Tumbler pages and virtual alters to worship the romance between The Doctor and Rose.  Of course, with David leaving the role and a new actor coming on board, there was some frenzy that it would destroy the hopes and dreams of fan-girls everywhere.  Fortunately, Russell T Davies has come up with a clever way to ensure that The Doctor/Rose romance would live forever — and fan-girls breathed a collective sigh of relief.

Then with the entrance of Matt Smith as the Eleventh Doctor, the romance and sexual sizzle was back stronger than before.  In fact, Amy Pond even tried to seduce him on the eve of her wedding night.  With a nice twist, that forbidden hanky-panky was averted and Amy wed her destined true-love Rory, and the adventures of The Eleventh Doctor with Amy and Rory began. That 3-season journey also introduced the epic romance of The Doctor and River Song.  The frisson of electric chemistry between them was palpable from their first moments on screen together.  Now helmed by Steven Moffat, DOCTOR WHO fully embraced the era of romance (and dare we say it, sex) with The Doctor; for clearly River Song and The Doctor were spending nights together in addition to their magnificent adventures.

So in the past 8 years, DOCTOR WHO found its world-wide appeal (particularly in the U.S.) by introducing sex and romance into its story.  Sex sells, but sex appeal is priceless.  DOCTOR WHO had finally hit upon the magic ingredient to lure in younger viewers, especially young female viewers.  Nowhere was it more noticeable than at San Diego Comic-Con.  Thousands of fans waited out overnight just for the chance to get up-close and personal with David Tennant and Matt Smith.  Their screams of elation could be heard blocks away.

But what about now? Will those same fan-girls and younger viewers feel the same desire to scream and yell for Peter Capaldi?  For many, he will seem as old as their grandparents.  He is not offering the same kind of appeal that David and Matt had.  Peter may be able to offer some of the other necessary ingredients to portray The Doctor, but he cannot change the fact of his age.  He is 24 years older than Matt Smith.  That is not insignificant.  All the great acting in the world won’t make up for one critical deficiency: sex appeal.

So when Peter’s name was announced and he was welcomed on screen as the new Doctor, he was met with silence.  Of all the other names in contention, in the end they had cast a much older actor. Everyone was stunned.  Barely even daring to think it, everyone had a the same thought: isn’t he too old?  Of all the other top fan choices, the oldest proposed actor was 42.  And yet, the actual actor cast was 55 — 13 years older than anyone predicted.  Even my top three picks skewed much younger:  Idris Elba (40), Colin Ferguson (41) and Jordan Gavaris (23).

Perhaps Steven Moffat was looking for the best actor for the role, which Peter is certainly a fantastic actor; but Steven got it all wrong in choosing one that could potentially lose half its audience.  Those increased ratings were not simply due to curiosity and interest in science fiction; increased ratings were due to interest in the actors playing The Doctor.  David Tennant and Matt Smith were able to bring the one thing that The Doctor never had before — fan girls, more importantly, U.S. fan girls.    Those rising ratings were attributable to girls discovering a sci-fi hero they could root for and lust for.  Someone closer to their age and one that they could pin-up on their bedroom walls.  In addition to fan-girls, it also helped recruit younger viewers who could identify more with an actor closer to their age.

Steven Moffat and Russell T Davies were clever enough to exploit the sex appeal of David Tennant and Matt Smith.  But casting Peter Capaldi could slam the door shut on fans who now feel that the party is over.  There will be the faction that is displeased that a woman or non-white actor wasn’t selected, which would seem negligible but for the fact that a larger faction of the DOCTOR WHO audience is now also displeased that a much older actor was cast in the role.

Some of the key attributes that we know and love about The Doctor are his zaniness, silliness, sense of wonder and curiosity, a childlike soul, physical agility, and as of the new era, sex appeal.   It is too late to turn back the clock to a time when The Doctor was merely an older gentleman collecting companions and going on amazing adventures.  The new era invited audiences to fall in love with The Doctor, as a lover, not a mentor.  It would be nice to think that fans will follow The Doctor on any adventure and through every incarnation, but the cold, harsh reality of the world we live in is that age matters. Appearance matters. Casting so much older will feel like a slap in the face of fans who fell in love with The Doctor.  They may have accepted a woman in the role, or a non-white actor because they were prepared for a change.  But no one expected this and given the new world rules created by design by Russell and Steven in selecting such younger actors to attract younger audiences, this was just the wrong choice.

We will stand by Peter Capaldi as the Twelfth Doctor, but everyone will be thinking: how soon can we get to the Thirteen Doctor?