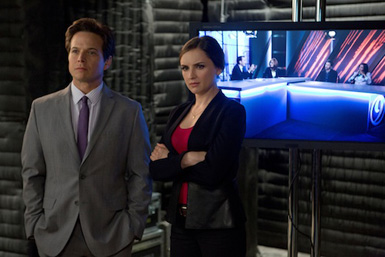 With its 2nd season finale about to air, the TNT drama PERCEPTION is finishing off a strong season of stories that tugged at our hearts and teased our brains as we saw how disorders of the mind can create unexpected results. Guilt, love, paranoia all factor into how we perceive the world we live in; and PERCEPTION showed us how that can be amplified and used both in positive and negative ways.

The 2-part second season finale of PERCEPTION introduces what seems to be a simple story of a young woman experiencing PTSD from her time in the military, which leads her to commit increasingly destructive crimes.  But the root of her problems originates from an illness that only Dr. Daniel Pierce recognizes.  Yet as they discover, just diagnosing a person does not truly explain how they got the condition.

In pulling upon the thread that particular mystery, Dr. Daniel Pierce and Agents Kate Moretti and Donnie Ryan discover a military cover-up, a murder, and a long history of criminal behavior with more than just one culpable party.  Investigating the cover-up will put Kate and Donnie’s jobs both on the line as they struggle to prove that there is a bigger conspiracy involved.  Kate also demonstrates how far she will go to ensure that a privileged and entitled criminal does not walk free, possibly jeopardizing her career and putting herself in the crosshairs. After which, it will be a test of whether both Donnie and Daniel will who have her back just when she needs it.  The epic finale dares to ask:  who will be Kate’s knight in shining armor?

In a recent exclusive interview, co-stars Rachael Leigh Cook and Scott Wolf reflect on the complicated love-triangle in PERCEPTION and where the Season 2 finale will leave their characters.

What was your reaction when you got the final two episodes of this season: “Wounded” and “Warriors”? Did you just look at the writers and say, “Really?  The kitchen sink? Could you have put anything more in there?”
RACHAEL: (Laughs) That’s actually a pretty typical expression on my face.  I just thought, “oh man, they’ve got us working on this one!”  I also thought, “I hope I can pull this off.” Then, “I’m really glad Ken [Biller] — who is the creator of the show — is directing these. So I won’t be thinking all the way through: I hope Ken likes this.”  I’ll just know ’cause he’ll be there.

Did you also want to ask them, “So you’re putting both Kate and Donnie’s jobs on the line. Really?!”
RACHAEL:  (Laughs) That’s a good point, but this is not the first or last time that will probably happen.
SCOTT:  I think when you have a 2-part season finale you expect a lot of stories going on. That said, I’m amazed by the amount of story these writers can fit in. Everything is just packed in for the characters.  But I loved the script. It makes for a strong end of the season and I hope it’s the best yet.

Amidst all the crazy storylines they threw in for this big finale, which of the storylines stood out for you?
SCOTT:  For me, it was the lengths that Donnie would go to in order to win Kate back.
RACHAEL: Scott’s definitely right that Kate and Donnie’s relationship plays out in an interesting way in this 2-part finale.  At the beginning of this season it was established that they were finalizing their divorce. They’d had a really bad break-up and then Donnie came back into town supposedly because he got a job offer.  But really it’s because he wanted to work things out with Kate and to prove himself to be a good guy.  Then he finds himself in a situation where he can help her when nobody else can over the course of these two episodes.  So in a situation that he could be using for his own gain, he really goes on to step up to the plate and completely be the hero that he definitely wasn’t at the beginning of the season.  It’s a really interesting journey for his character — to come in like a knight on a white horse and risk everything for Kate. It’s exciting stuff to be able to play.

Is there any worry that if Kate and Donnie were to get back together how that would effect both their relationships with Daniel?
RACHAEL:  I don’t think their relationships will have clear lines amongst the three of them.  It’s always going to be a little bit blurry and crazy. But situations change and people change and our writers are certainly lovers of putting things, as in life, into the gray area.  So we don’t know what’s going to happen.  (Laughs) But I’m curious to know what people would like to see happen.
SCOTT:  Obviously anything would be speculation, but I suppose speaking as the guy who plays Donnie that I hope so.  I’m rooting for Donnie.  In a way I was rooting for Donnie and Kate even from the beginning when he first came back to town.  Even though he was getting kicked around, the writers always found a way to show the kind of history and chemistry and who they were to each other before things went bad.  Storywise, I think it’s interesting. Obviously there’s chemistry between Daniel and Kate, and the audience I think is always pulling for the two of them to kind of find each other.  So it just complicates things in an interesting way.  It’s kind of just a way to create this triangle.

It seems like they may be trying to eliminate the triangle at this point as there’s a potential new romance for Daniel in these last two episodes as well.  It feels like they are creating two separate relationships.
SCOTT:  (Laughs) I suppose it’s more of a “square” then at this point.

Reflecting back, what was the best part of your character’s journey this past season?
RACHAEL:  That’s a tough call. I loved getting kick SCOTT:‘s character around a little bit, and to show the much sassier side of Kate. Then I loved getting to really dig into the dramatic stuff, where she definitely pushes the envelope too far and takes the law into her own hands, even after she’s been removed from a case, which is in the finale.
SCOTT: For me, I think Donnie’s spent most of the season trying to position himself in people’s lives in a way that is not quite so negative.  What I love about the story between Kate and Donnie is how it was portrayed throughout the season. On a less well-written show, things would have just happened so much faster. So it always felt authentic and patient in terms of the way it was told. So my favorite part of the season was this journey of trying to find some redemption while trying to find a way to win Kate back, and at various points it’s going very well and then not well.  Plus, Eric [McCormack] and Rachael are just really fun, present and talented actors. So playing all the nuances was fun.  I also think what was really fun was each week there’s these case and to be in those scenes — and this is what sets the show apart — is whether it’s interviewing suspects or at a crime scene, to be playing what’s on the surface, but the whole time there’s this stuff kind of living underneath it. The stuff between Kate and Donnie, the stuff between Daniel and Kate, and even stuff between Daniel and Donnie; so it was always fun to be playing scenes where there was one thing happening on the surface, and all this life kind of percolating underneath.

To see what kind of trouble Kate lands smack in the middle of and how Daniel and Donnie try to get her out of it, be sure to tune in for the 2-part Season 2 finale of PERCEPTION on Tuesday, August 20th and August 27th at 10:00 p.m. on TNT.