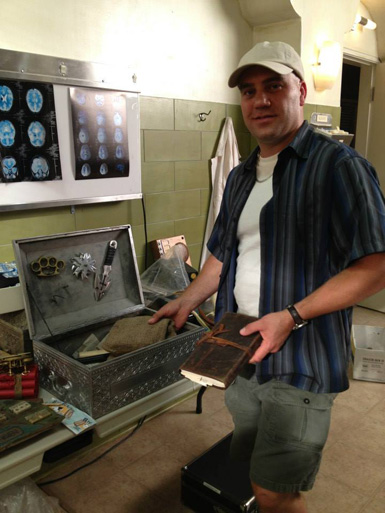 Television is a curious world where everything is but an illusion, including some of the things you would think were exactly as they appear. Yet for TV shows, it is rare that they use actual real-life objects as some are too dangerous, some are too hard to locate in a timely-manner, and some just do not exist yet. So lots of the things you see on screen may just be something that the props department on a television show dreamed up and created. In a show like HAVEN, where not only is the show filmed in the remote region of Chester, Nova Scotia where most average items are hard to obtain, HAVEN also likes to dream up the impossible — and then expects that its amazing art department and props department will find a way to make it possible. Thus, HAVEN’s props department can create just about anything from: treasure chests to fake animals to weapons, most of which only look dangerous and are surprisingly safe to handle.

In a rare interview, I had the privilege of chatting with props master Jason Shurko about some of the unique props created for HAVEN from its first couple of seasons. (Note: No props from Season 4 are shown as those would be too spoilerish!) Some of the featured props include:

Be sure to watch the following video interview as Jason shows off some of the detail and thought behind making these cool props for HAVEN:

For the avid and curious fans, HAVEN returns for Season 4 on Friday, September 13th at 10:00 p.m. on Syfy. The wait is almost over! #DiscoverHaven