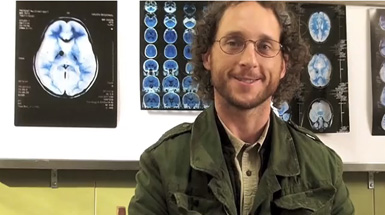 Briefly introduced in last week’s premiere episode, viewers got their first glimpse of “Sinister Man” portrayed by newcomer Kyle Mitchell. Sinister Man along with his partner Heavy (Robert Maillet) have a vital role to play in Season 4 of HAVEN. They are not your average thugs of the week, so it was a privilege to talk with Kyle about his new role to try to get a few clues about what Sinister Man is up to.

Like most of the cast, Kyle was reluctant to reveal any real spoilers, but he was happy to talk about getting the role and making the transition from crew to guest actor this season. He was also delighted to get a chance to play a character with a darker edge and that he was to be paired with WWE wrestler Robert Maillet as partners-in-crime, so to speak, on screen.

For Kyle, working both behind the camera as crew and getting the opportunity to transition to on-screen work has been a dream come true and he is anxious to see how the fans respond to his character. Fortunately, the Sinister Man and Heavy duo are going to be featured a bit more throughout the season, so fans should look for them as the episodes unfold.

Here’s what Kyle had to share about the differences between crew work versus actor work and why he has an abiding deep respect for both: