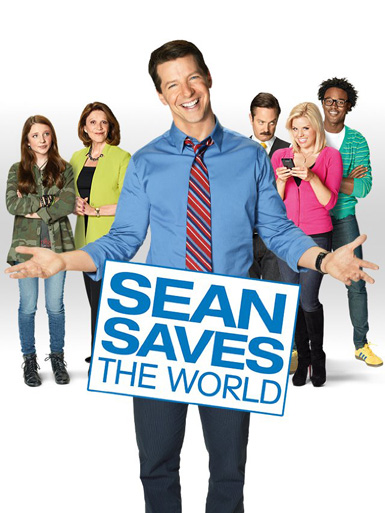 NBC is putting their Thursday night of comedy back together this fall with three new sitcoms. Leading the pack is Sean Hayes, returning to his sitcom roots in SEAN SAVES THE WORLD, premiering Thursday, Oct 3rd at 9PM. But can Sean really save the world? His character, aptly named “Sean,” would like to think so. If saving the world means balancing the perfect work life and stepping up to be the world’s perfect single dad to a fourteen year old daughter. At his side to either help or trip him up along the way is a colorful cast, including Linda Lavin (ALICE), Megan Hilty (SMASH), Thomas Lennon (RENO 911), and newcomer Sami Isler.

SEAN SAVES THE WORLD dives into some timely topics. Does a single parent have to choose between successfully raising kids and a solid career? Executive producers Todd Milliner, Sean Hayes, and Victor Fresco hope to answer just that with some signature comedy. The cast and executive producers from SEAN SAVES THE WORLD sat down on set at Universal Studios to chat on their fun new characters, what the on-set dynamic is like, and getting advice from veteran co-stars. Sean Hayes opens up on why he loves this switch from WILL & GRACE’s Jack McFarland and spills on his views of parenting.

Be sure to tune in for the premiere of SEAN SAVES THE WORLD on Thursday, October 3rd at 9PM on NBC.