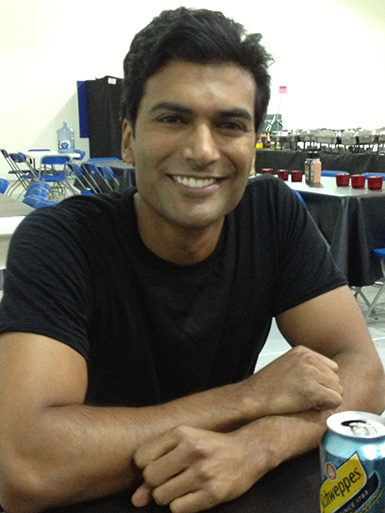 Season 1 of BEAUTY AND THE BEAST revealed a real nightmare: a second beast — one who would kill without conscience.  Assistant District Attorney Gabe Lowen (Sendhil Ramamurthy) stalked Vincent (Jay Ryan) until he could obtain what he need from him — a way to irradiate Gabe’s beast, even if it was at the expense of Vincent’s life.  Vicious and without remorse, Gabe’s beast nearly destroyed them both.  When last seen at the end of Season 1, Gabe’s beast was shot and dying.  But as Season 2 quickly revealed, Catherine Chandler (Kristin Kreuk) saved his life in order to use Gabe in the search for Vincent.  In a recent press interview from the set, co-star Sendhil Ramamurthy gave the scoop on what is next for Gabe and how rocky his relationships will be with the the rest of the “Dream Team.”

In Season 2, Gabe has miraculously survived all those bullet wounds. When did you find out that he would survive beyond Season 1?
SENDHIL:  They told me before I got the finale script that I was coming back but they needed a cliffhanger and that I couldn’t say anything.  So I didn’t.  Catherine actually saves him ’cause she feels she needs him to get Vincent back.  Not for any other reason.  You’ll see how she saves him.  It’s the opening two minutes of the premiere.  She brings out the paddles and rips his shirt off and all that.  I was sitting there and we couldn’t stop laughing through the whole thing.  I would start laughing inappropriately at the wrong time and then throw my body just to scare her.  So she saves him and he’s like a different Gabe once he comes back.  When Catherine shocks him and brings him back to life, we don’t know how yet but Gabe’s no longer a beast when that happens. His beast side dies when he dies, and when Gabe is resurrected, he comes back as a human only.

What about Gabe’s memory?
SENDHIL:  Again, when Gabe was a beast he never remembered what he did anyway.  So he has very little recollection. He only knows what people told him. So he knows that he was a beast. He still remembers that.

Does he remember trying to kill Vincent?
SENDHIL:  No, he doesn’t remember that, but everybody tells him that’s what he tried to do.  But he has no memory of all that.  That was kind of one of the things we did in the first season — that he’s a beast and he does all of these things, but he has no recollection of doing it.  Whereas Vincent does remember everything that he does. So when Vincent kills somebody, he remembers that he did it.  Whereas Gabe has no clue.  He just wakes up and is like, “Where am I?”  So that happens and then Gabe’s journey so far this season has been to make amends.  He’s got a lot to make up for.  He’s kind of born again.  That’s kind of the way we were looking at it.  He has to try and make it up to people for what he’s done.  When they told me the trajectory of what my character was going to be, I was like, “How the hell is he going to get anybody to forgive him for all this?”  And I’m not sure that’s the point — Gabe doesn’t come into it thinking everybody is going to forgive him.  I think it’s more that he knows he has to try.  ‘Cause let’s face it, he gets saved by Catherine, but he could just bolt now.  He’s human and he could just go off.  He’s load and he’s got so much money.  He could go an live on a yacht with hot women all over the place and just live a great life. But he doesn’t do that.  He makes actually the hard decision, which is to stay and try to make amends and to get back into people’s good graces and to try and do some good.

Does Gabe now have a tortured soul? Is it weighing on him a little bit?
SENDHIL:  Oh yeah.  It’s not hunky-dory yet.  There’s conflict.  There’s torment.  There’s darkness. But we also start to see a little bit of a lighter side of Gabe, which has actually been fun to play.

Does he have a humorous side to him?
SENDHIL:  He does.  He does have a sense of humor and I think the way I approached it is I started reading up about people and what happens after near-death experiences (NDE). So I went on these sites that had these NDE’s that people write about and it was really helpful ’cause it’s kind of like rebooting the character in a way. And I didn’t know how to go about it ’cause I came back thinking I was going to be tortured, beast-Gabe and I would have to figure something out, and then that was all gone.  So I was like, “What do I do? How do I approach this?”  Then that was really helpful for me.  So I kind of trolled the internet reading about near-death experiences. There’s so many blogs and there’s actually a newsletter.  So I subscribed to the newsletter and started reading about all this and it really helped me to figure out how to gauge Gabe for this season, so far.  So that’s where Gabe is and he’s really trying to help Catherine and the whole team really — J.T. (Austin Basis) and Tess (Nina Lisandrello) and Vincent, even, to figure out what is going on.  We kind of resolve the whole Muirfield thing quite quickly and move on to new and exciting problems that our characters have and bad guys that come after them.

Who is Gabe interacting with mostly this season? ‘Cause it seems like there may be more opportunities for him to interact with J.T. now since Gabe’s a part of the team.
SENDHIL:  The majority of it is still with Catherine, but there’s actually some good interaction with J.T. — and there’s actually some pretty cool interaction with Vincent, which surprised me.  I didn’t know how they would go about doing that, but something happens to Vincent that makes it very easy for them to have a conversation together.  Makes it easy for everybody to have a conversation with him.  It’s a Jason Bourne-situation.  Vincent has no memory. He literally doesn’t remember anything.  He doesn’t remember Catherine.  He doesn’t remember anything.

He and Vincent could be buds now!
SENDHIL:  (Laughs) I don’t know about that.  But it’s certainly not like a wholly combative relationship at all. There’s actually help and aiding of stuff.  That’s been fun. That’s been fun to do.  But the majority of Gabe’s interaction is still with Catherine and a little bit more with Tess, which has been really fun to play because we’re still the precinct-side of things. It still exists, but not like it did in the first season. But there still is a precinct component to the show and Gabe and Tess kind of hold that end up.  So I’ve had some really cool stuff with Nina, which is fun to play.

It seems like Gabe’s world is expanding this season.
SENDHIL:  I think more than any other character. I interact with everybody a lot, which is fun.  It’s fun to act with all the different people.  I guess 95% of my scenes were with Kristin in the first season and now it’s with Catherine, but also with J.T. and Vincent in scenes or with Tess and J.T.  So you kind of get the core characters interacting a lot more and all together in one scene, which has been really cool. ‘Cause before it was me and Kristin, and I wouldn’t see people for days — until we got to the finale.  Then I saw Vincent, but it was as beasts, so my character didn’t remember seeing him.

Do you miss, as an actor, portraying a beast?
SENDHIL: No.  I can’t tell you how excited I was when I found out that I wasn’t a beast.  It was such a hellish process, the whole thing.  To be honest, my skin just didn’t react well to it and I had really bad reactions to prosthetics. So that was kind of helpful in not being a beast anymore, quite frankly.  I’m so excited to see the back of the beast.  It was not fun.  I’m doing my best to do a good job as a human so they don’t feel they have to turn me in to a beast.  (Laughs) As cool as it is to do all the visual of the beast stuff, the process of it just stinks.  I’d gone through it before on HEROES doing all the prosthetics and I had a horrible reaction to those prosthetics as well.

So now it’s in your contract: no prosthetics!
SENDHIL:  When I came onto the show, I didn’t know I would be a beast.  I had no idea.  Otherwise, I probably wouldn’t have done it to be totally honest. (Laughs)  So that was probably the toughest part of last season — just dealing with the prosthetics.  Now that’s done, I’m really happy.

Is Gabe still carrying a torch for Catherine? Or is that off to the wayside?
SENDHIL:  It’s still there. But it’s more that he’s keeping it really under wraps — or so he thinks.  But other people kind of cotton onto it pretty quickly.  One person in particular, which will come out as the season goes on.  I don’t know where that’s going, to be honest.  It’s there.  It’s just very much under wraps.  ‘Cause his main focus is really: “I’m cured from being a beast”, so his whole goal now is to make amends and his major step forward in doing that is to help Catherine cure Vincent.

Does that mean Gabe is a quasi-lab rate for J.T. since he has been cured?
SENDHIL:   That would be pretty interesting. So I guess the answer to that is: no, or not yet.  (Laughs)  But Gabe’s cure, and trying to cure Vincent by that same method, is explored in the first 5 episodes.  We see a little bit of success, a lot of failure.  Where we’re at now, is we’re still now sure how it happened. But I assume that we will find out.

To see if Gabe is on the right track and can come up with a way to cure Vincent, be sure to tune in for all new episodes of BEAUTY AND THE BEAST on Monday nights at 9:00 p.m. on the CW.