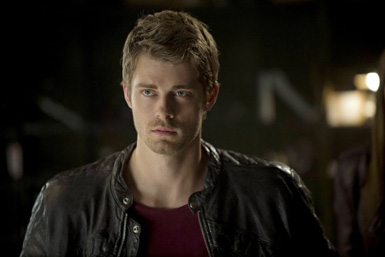 What does a superhero club do when one of their own defects to the dark side?  In the new CW drama series THE TOMORROW PEOPLE, this is the very quandary that faces John Young (Luke Mitchell) after newcomer Stephen Jameson (Robbie Amell) turned his back on the very people who rescued him from his constant turmoil and insecurities.  It will then be a test whether John and Stephen can find a way to work together to defeat Ultra or whether there is a way for Ultra and the Tomorrow People to find a way to coexist — though that seems unlikely given how ruthlessly Ultra has hunted and exterminated those with gifted abilities. In an exclusive interview, star Luke Mitchell previewed what is next for our heroes and the trials they face as the series unfolds and tells the story of these unique individuals with such extraordinary powers.

What drew you to THE TOMORROW PEOPLE and the role of John Young?
LUKE:  (Laughs) Superpowers — and a great script.  I loved it and my manager loved it, and I just went in there, and got lucky I guess.

Which is your favorite superpower so far?
LUKE:  Teleportation. If I had that in real life it would be awesome because no one like to travel.  But on the show I suppose the best power is telekinesis because it looks cool.  It’s the one where you can move objects and throw people around without actually touching them.

Speaking of that, how do you guys make that look so real on screen?
LUKE:  There’s wires and stunt doubles and that kind of thing.  When you do that when you’re performing and you’re pretending that you have powers, obviously it all looks good, and you really have to look like you believe it when you do it.  So it’s like revisiting childhood when you’re pretending to be Superman or Batman, and sometimes it feels really silly, but you have to play it with conviction.

Your character John is a bit of a mystery at this point. How would you describe who he is?
LUKE: He’s the leader of the Tomorrow People. In the pilot, you kind of get a basic introduction of him and the world he lives in, and that he’s in a relationship with Cara (Peyton List). That’s a complex relationship.  There’s a lot of love there, but it’s a strained relationship based on the fact that they cannot just have regular couple time.  They can’t just go hang-out at the movies or out to dinner.  So they are kind of constrained by obligation and survival. And that’s interesting.  You’ll find out a lot more about John in the coming episodes, specifically episodes 4 and 8.  They delve into John’s backstory.  Episode 4 flashes right back to John’s childhood and you’ll get a little taste of that and see what his childhood was like.  Then later on in Episode 8, it’a more recent flashback, and you kind of see the more adult things that John had to go through, which is pretty dark and explosive.

Given how complex John is, what is the one quality you’d say you most admire about him?
LUKE:  His strength.  He’s a very strong character.  When you find out the things he’s gone through, I suppose it’s a byproduct.  You see people who have gone through a lot of stuff in their pasts and they come out the other end stronger.  But it’s definitely an admirable quality.  John’s a good guy and he’s just trying to do the right thing for the people he loves and cares about, like the Tomorrow People care about him.  That’s the way he sees it.

There’s a sense that John is on a mission to rescue the Tomorrow People.  Is he just rescuing them or is he recruiting them as well?
LUKE:  It’s a little bit of both.  They are constantly on the lookout for new breakouts, as they call them, Tomorrow People who are only just discovering themselves because that is the most critical time in their lives.  If they are not nurtured at that point in time, they could turn out to be bad because obviously they are going to be picked on at school. Like as you saw in the pilot episode, Stephen’s character is picked on.  So we’ll be delving into those things and looking at the underdog and how until someone befriends them. They get looked upon differently, especially as kids.  So it’s about taking that person in and nurturing them and letting them know, “hey, it’s not a bad thing you’re different, it’s a really good thing that you’re different.”

Will John understand why Stephen teamed up with Jedikiah (Mark Pellegrino), or will John view that as a betrayal?
LUKE:  A little bite of Column A and a little bit of Column B.  It kind of goes full circle as they deal with that in Episode 2.  Initially, he’s very unwelcoming to Stephen, to put it nicely.  He tells Stephen in no uncertain terms that he is not welcome amongst the Tomorrow People any more now that he’s working for Ultra.  But as the episodes progress he realizes that it may actually be a good thing that Stephen’s working there, even though it’s a dangerous job.  But who better to be working in a dangerous job than the person he doesn’t particularly like? (Laughs)

We also found out that there’s a past history between John and Jedikiah?  Are we going to be find out about that more?
LUKE:  Oh yeah.  I think that relationship is going to be one of the more interesting relationships. I love working with Mark [Pellegrino].  We’ve just had some really cool storylines to delve into, both past and present. It will be really cool to see the audience’s reaction to those storylines.  It’s like a line of bombs going off, opposed to one bomb.

What some of your favorite kinds of scenes to work on right now?
LUKE:  (Laughs) It depends on the day and how sore I am from my previous fight scenes.  The fight scenes are pretty cool.  It’s a unique thing and we have some amazing stunt coordinators to choreograph these scenes, and it’s kind of cool to pretend that you’re a badass, when really you’re not. Sometimes, it’s like, “Oh, my body needs a rest,” ’cause John has to do a lot of fighting obviously being the leader.  So that can be quite fun.  I’ve also had a lot of fun recently shooting scenes with Mark.  I can’t really talk too much about those scenes, unfortunately.  Then any scene we shoot in the subway station, that is incredible.  It’s such a cool set.  It feels really cool, it feels real, and it doesn’t feel like a set.  It’s possibly one of the coolest sets I’ve ever experienced.  So when we film scenes in there I enjoy it.

What can you tease that fans should look forward to coming up on THE TOMORROW PEOPLE?
LUKE:  Betrayal. That comes to mind.  And Tomorrow People not necessarily being good, using powers for evil.  Then a tumultuous journey ahead for John and Cara — and John and Stephen — and John, Cara and Stephen.  But fans should also look forward to getting invested in the characters because each of the main characters has a different backstory where you get to find out a lot more about them.  I hope everyone enjoys those.  It will give you a much more well-rounded view of each of our heroes.

To see what kinds of trouble is brewing between John and Stephen, as well as Ultra’s secret agenda be sure to tune for all new episodes of THE TOMORROW PEOPLE on Wednesday nights at 9:00 p.m. on the CW.