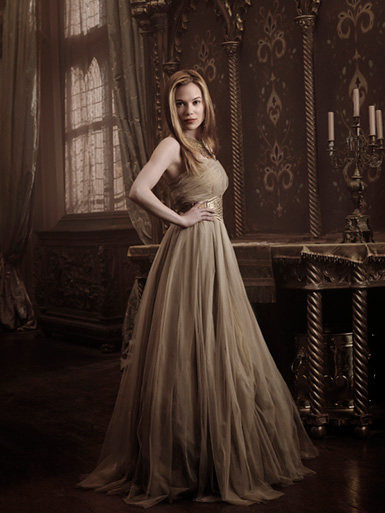 When living in the time of corsets, long skirts and forbidden romance, a young lady had limited options for venturing out of her social circle destined by birth. Fortunately for some, money could still buy their way in with the titled and elite. In a press interview from the set, star Celina Sinden talked about her character Greer’s ironclad plan to marry for title in a time when titles were scare and difficult to procure. Fortunately for a very determined young woman with vast amounts of money at her disposal, rising above a defect of untitled birth is but a small thing to overcome.

What would you say is the one thing that stands out about your character Greer?
CELINA: She’s ambitious and she’s actually the only one of the ladies that isn’t titled. So she’s got lots of money, but she needs to rise in the world through finding a husband, which is her mission at court and looking after Mary (Adelaide Kane) — which is obviously another huge job for her.

Who would be someone she could potentially go after for a husband? If you don’t have a title, that was a big deal back then.
CELINA: Yeah, who is going to take the risk? She’s probably looking for a poor titled man. But there’s been different options. I can’t give anything away, but I think that will be something that goes with Greer’s search for the perfect man. Who knows where that will lead.

Is Sebastian in that realm of possibility anywhere?
CELINA: He’s not so far. Who knows what will happen. But he has no title. He’s a bastard. That’s not good enough for Greer. (Laughs) She’s going for kings. Why not aim high?

It would seem like Greer is freer than the other ladies because they have titles to life up to.
CELINA: Interestingly, it’s the other way round. Greer is under so much pressure from her family and from her own self-imposed prison of “I must be the most well-behaved. I must be the most etiquette correct and polite and do everything right, so I don’t get kicked out — ’cause if they find out I don’t have a title, I’m ruined.” So I think she almost takes it to that extreme. Whereas the other girls are sort of comfortable. They don’t need to prove themselves all the time. I think Greer needs to prove to herself that she belongs there.

Does Greer have an ally in the court?
CELINA: The girls are her main allies. They are best friends and they have grown up together and REIGN finds them rediscovering each other as teenagers. They just look out for each other. There are spats, just like any other friendship group, but they get over it.

What has it been like actually working on the show?
CELINA: We film in some of the most beautiful locations — I feel so lucky — like by a lake with a castle in the background, and I’m like, “This is a job? What?!” It’s been really great. We’re not a historically accurate show and we’re not trying to market as historically accurate. It’s fun and it’s fantasy. It’s a great fast-paced thing, with danger in the woods.

Is Greer kind of hyper-aware all the time because she has to be so proper all the time in court?
CELINA: Absolutely. She’s the most correct of all the girls. She’s definitely put herself under pressure to be the most proper and correct person. She’ll do everything by the book.

What about hyper-awareness as to the political mechanisms and power struggles?
CELINA: She’s done her research. She’s definitely the girl who knows what’s up. Greer’s like, “that’s this person and he’s this old and he’s got this much money and he’s titled.” So, yeah, she knows everything. She’s a bit of a know-it-all. (Laughs)

To see how soon Greer is able to secure her new position in the French court and whether it has unintended ripple effects, be sure to tune in for the premiere of REIGN on Thursday, October 17th at 9:00 p.m. on the CW.