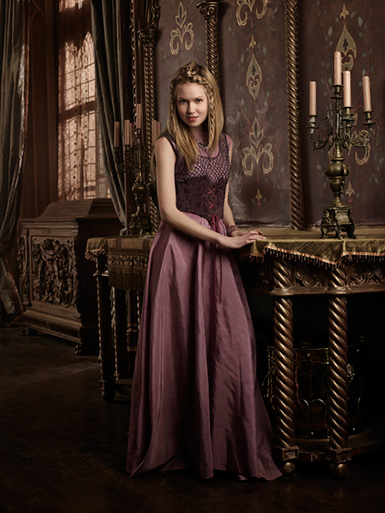 Being the keeper of a queen’s secrets is a precarious position.  It demands a selflessness that most ladies-in-waiting are not accustomed. But for Aylee (Jenessa Grant), being the queen’s confidante is a privilege and gives her life purpose beyond waiting to be married off as a political pawn. In a press interview from the set, star Jenessa Grant talked about the challenges of such a prestigious position and how Aylee struggles to have an identity of her own beyond her royal duties.

What can you share about the relationship between Mary (Adelaide Kane) and your character Aylee?
JENESSA:  Aylee is basically Mary’s confidante.  She’s the one that Mary can trust the most, like when Mary’s kind of freaking out.  She can go to Aylee and she’ll be there. Mary has to show a bit of a stronger front to the other girls. But you know how you have the one girl, for whatever reason, it just clicks the easiest.  So they have that kind of relationship.

What do you do to help Aylee stand out as a character from the other girls?
JENESSA:  We all kind of have our own styles, but Aylee’s is lots of layering. Lots of little odd pieces that you wouldn’t think would go together and it’s very creative actually.  So I kind of think of her as the creative one. She’s playing with her hair. She’s trying to standout in little ways.  I’ve been doing it her hair as well. I think Aylee has the most elaborate hair of any of the girls and it keeps changing — and if you’re going to put that much effort in, it’s a choice.  So I think she’s kind of playing with all these options of how to hold herself and be around these girls.

She’s still seeking her identity then?
JENESSA:  Yes, and I think that’s who I see her as. I also think she’s one of the youngest and she’s incredibly loyal to Mary and always puts Mary’s needs before her own.  She’s at that age where she’s supposed to be figuring out who she is, and when you put someone else at the forefront of your thoughts and hopes for the future, you kind of leave behind your own development.  So I think she needs to figure that out.

What’s it like working with Toby (Regbo) and Torrance (Coombs)?
JENESSA:  I personally think it’s very funny that they are described as hunks, ’cause they are such great actors and so funny and sweet.  But Toby is like this little funny scrappy British guy and Torrance is like the biggest nerd you’ll ever meet.  Torrance even named his cats Daenerys and Renly. So that says something. (Laughs)

What about Rossif (Sutherland)?
JENESSA:  Rossif is so mysterious.  He really is.  He’s got something going on and like if he’s not interested, he’ll wander off somewhere, just like in his own head.  But he’s a big teddy-bear.  He’s so sweet and nice.  I think he grew up in Paris or something, so he kind of has like that European thing going on as well.  And his accent is so interesting for the show.  I know like we all had to do our own accents, but for Nostradamus it works.  I know originally, there was some criticism because he was supposed to be such an older figure, but it works.  You almost don’t know how old he is.  It’s really interesting.  He’s mixing all these potions.  He could just be taking something to stay young forever.

To see where Aylee’s own journey takes her as the French court swirls with intrigue, mystery and unexpected romance, be sure to tune in to the premiere of REIGN on Thursday, October 17th at 9:00 p.m. on the CW.