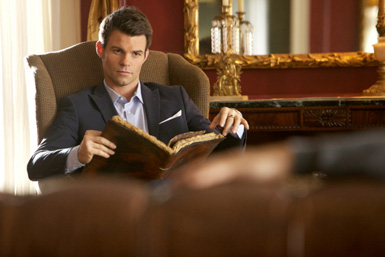 As if the world of the CW’s sizzling vampire series THE ORIGINALS could not get any hotter or more suspenseful, this week’s episode entitled “Fruit of the Poisoned Tree” delivers exactly that.  For as shown in last week’s episode “Saints and Sinners,” all is not what it seems in the brewing war between the vampires and witches of New Orleans — apparently Marcel (Charles Michael Davis) had better intentions than anyone suspected when he liberated Davina (Danielle Campbell) from her deadly fate as a witches’ sacrifice.

In a recent press screening of the episode, executive producers Julie Plec and Michael Narducci revealed a few candid teasers about what lies ahead for Klaus (Joseph Morgan), Elijah (Daniel Gillies), Rebekah (Claire Holt) and baby-mama Haley (Phoebe Tonkin), as well as what is going on with the seemingly scheming Marcel and his wicked witch Davina.

Elijah’s back and he’s got a plan.  Alas, Klaus is a bit peeved that his big brother is taking charge and perhaps wooing his baby-mama in the process.  Hopefully mutual understanding and bonds of brotherly love smooth out things into an alliance.  Which they are going to need, for as Julie Plec teased, “This is the episode where Klaus’ house of cards comes crumbling around Klaus. All the clever machinations he has set into motion are getting ruined all around him.”

When Marcel goes to visit his good-friend Klaus at his humble abode, he discovers a shocking lie that begins to raise some nasty suspicions about his long-time friend and mentor.  Hint: look out for those red apples!  Julie Plec teased, “The first level of suspicion has been raised.  He clearly knows that this person that has been buddying up to him all along is not necessarily on the up and up. It’s just the beginning of the next stretch of trying to figure out what Klaus’ game is and where he fits into all of it.”

Rebekah is fed up being the babysitter, housecleaner, and being forced to take out the trash for her brothers.  So with Elijah back, she will be reevaluating whether she has any reason to stay in New Orleans.  But as always with Rebekah, whoever rules her heart rules her destiny.  Julie Plec explained that for Rebekah, “She honestly believes what she wants is outside the family, in terms of peace, harmony, happiness, sanctity — and as much as she loves Elijah and loves, hates and loathes  and yet still loves Klaus — she really believes that if she can just break free of this, ‘I can have all I have ever wanted, which is a life I am in complete control of.’ But what she is going to have to come to terms with is the fact that you cannot escape this group no matter what you do — but we’ll see what she chooses to do. This is her opportunity for freedom.  She can hit the road and be gone.”

Cami (Leah Pipes) may be compelled to be in the dark, but that spell is only so strong. She is a free-spirited, strong-willed girl who chafes under the feeling that someone may be controlling her. Pity the man who invokes her wrath.  Julie Plec admitted, “[Cami] is pissed and interestingly enough, even though she is compelled by Klaus to forget these things when he separates from her and she consciously won’t remember any of this until she’s back in Klaus’ presence, she’s not going to let him off the hook from it.  She’s going to do everything and anything she can to break free of this bond he has sort of created between the two of them that is controlling her.  She’s not a weak, wilting little flower, so she’s probably going to have a little success at it.”

Hayley is wielding her own seductive power these days as she senses that Elijah is not just interested in the baby she’s carrying.  Those lingering and smoldering glances will lead to a couple memorable scenes — one in the kitchen involving a brief moment with ice cream and much longer and steamy scene in the pool where Hayley and Elijah get all hot and bothered — and it’s not a dream!  Julie Plec weighed in by stating, “There’s definitely something. Elijah, as we know, is a good protector and tends to be drawn to people in spite of himself.”  Michael Narducci chimed in to add, “What a great fantasy Elijah is to someone like Hayley. How could she not be drawn to this protective and noble man? Something she’s never seen before.”  Though Julie further noted, “It’s very clear that [Klaus] is very territorial — that he likes what is his to remain his.  So I have a feeling that we’ll stir up a lot of conflicted emotions for him as well.”

Speaking of Hayley, who is that protective wolf who came to her rescue? Look for a familiar face to make an appearance soon.  Good thing too as someone else is going to suddenly take a great interest in her well-being.  Julie offered, “The crossover is happening very soon. It will answer a couple questions, one of which is answering the first piece of the mystery of: who is the protective wolf?”  Michael Narducci added, “A lot of things will come out of that crossover that are going to shake things up.”  Julie then admitted, “I’m fairly certain that we will catch our first glimpse of Tyler (Michael Trevino) before November is over.”

If you thought Klaus had effectively taken care of Thierry (Callard Harris), think again. Apparently being cemented in Marcel’s dungeon does not make him less a threat — for who is Marcel going to turn to when he needs a listening ear to all his troubles and woes?  Julie Plec explained, “[Marcel] has a Judas in his midst, so he’s got to deal with that.”

A third power broker will enter the picture and add tension to the bright lines drawn between the vampires and witches.  Just who were they all forgetting about?  Hey, humans are never to be ignored and push aside. They just may have something to say about their fates too.  As Michael Narducci noted, “Who’s side is Father Kiernan (Todd Stashwick) on?  I think he’s on whoever’s side he needs to be on to bring some modicum of peace to New Orleans. But will that change? Will he have any other agenda?”

Little witch Davina may be under Marcel’s protection, but her fledgling friendship with Elijah is going to be a huge asset — and a huge thorn in their side at the same time.  Julie foreshadowed for Davina, “The journey that she’s going on is just beginning.  She is about to embark on a journey that will sort of put her at odds with everyone and create some new surprisingly new friendships and new alliances that we maybe did not see coming.”

Just which “witchy” side is Sophie Devereaux really on? With her mercurial nature it is really hard to tell and everyone is going to want to keep a close eye on this duplicitous witch as her allegiance may tip the scales.  Julie Plec noted that “Sophie is going to have a bit of a spirit crisis that she is going to need to snap herself out of.”

Finally, with a huge collective sigh of relief, Julie Plec confirmed that Daniel Gillies is back for the remainder of Season 1 of THE ORIGINALS, as his double-duty with his Canadian series SAVING HOPE is done for the season.  More Elijah is a great thing!

Look for all new episodes of THE ORIGINALS on Tuesday nights at 8:00 p.m. on the CW.  For every stab in the back, for every stake in the heart, there are also some surprising moments of genuine familial and romantic love.