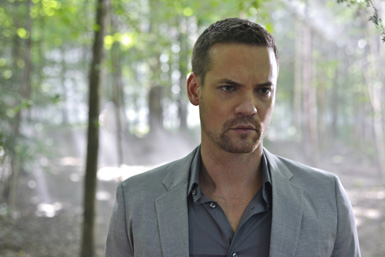 When we last saw her in the Season 3 finale of NIKITA, Nikita had been coerced by Amanda into assassinating the President – or the woman who the entire world thinks is the President anyway — and with Michael’s life on the line, Nikita did not hesitate. So with a word to no one, Nikita executed her heinous mission and became the most wanted woman in the world – although she did not actually pull the trigger, as the woman posing as the President only too happily pulled the trigger right in front of Nikita, thereby implicating her in the assassination.

With the bulls-eye squarely planted on her, Season 4 returns at a high octane pace and, unbeknownst to Nikita, her Division friends did not believe for one second that she is guilty of the crime she is accused, and if so, then she had a damn good reason. So Michael and the rest of Nikita’s Dream Team are out there rooting for her and trying to help her from afar in anyway they can.

In a press interview from the set, star Shane West previewed where this final season of NIKITA takes our heroes and the obstacles they must overcome.

This being the final season and things picking up at a running pace, is there a time-jump that we should anticipate?
SHANE: If my memory serves me correctly, it’s about a 3-week time-jump. Clearly, Team Nikita is still together without Nikita and I think it’s: how quickly are we going to find her and are we going to be able to clear her name? All our names actually, and solve all this in six episodes. So it’s going to hit the ground running. There’s a really amazing scene in the first episode that’s going to throw everybody off — all the viewers off and scare them a little bit. Then it will keep going from there. I’ve been very proud of these first 5 episodes. Hopefully the 6th one is just as good.

Have you been able to get everything in during the final six episodes?
SHANE: Yeah, we really have. Well, not everything ’cause they wouldn’t want it to work that way with one left. But we managed to get a lot done. Wrap up some storylines and include some new stuff, somehow in the first 5, and make it still action-packed as much as to what we have been used to.

Will the final episodes focus on clearing everyone’s names, or is there some other storyline you are pursuing?
SHANE: One of the great things about this show that I’ve always loved is there is always underlying storylines. There’s always one main storyline, but like a tree, it spreads out on different paths. And with this season, obviously there’s only the 6 episodes and the intent is to clear Nikita’s name for the accusation of the wrongful assassination of the President and for the rest to clear their names from their pasts in Division. But the underlying story for Michael and Nikita are: what the heck is happening with Mikita and are they able to get together again? That’s my main storyline for this year. What happens with Birkhoff and Sonya? What’s going on with Ryan? This potential setup with Alex and Owen/Sam. It’s a lot of stuff. Then what’s going to happen to Amanda? Does she die or does she not die? We killed all the bad guys before, maybe we’ll pull a surprise and she doesn’t die. So in the first 5, we’ve managed to resolve almost all of that. But there’s still a lot that has to be done in Episode 6. So we’re all pretty anxious about that one.

Is Owen back, or is Devon playing just Sam?
SHANE: It’s Sam. I think they established that at the end of last year. He is Sam. Owen was a different character. He can learn from his own mistakes and grow as Sam, but he always was Sam. So he’s going to be Sam to the end and hopefully Sam finds some of Owen’s qualities. That’s Devon’s journey. So there’s some light-heartedness, but there it’s a bit more of a darker season.

What do you think fans are really going to love and look forward to in the first 5 episodes?
SHANE: The Mikita fans will be on the edge of their seats as to what’s going to happen ’cause Michael and Nikita pretty much together as part of the group pretty immediately because we only have six episodes and we need to move along with the storyline. But as it has been said in the past, Michael cares very much about Nikita, but what we don’t know is whether he’s caring for her to take care of her and to clear her name and save her — but is he also going to continue a relationship with her because after her leaving him and leaving the ring and all that kind of stuff, this might be the final straw for Michael. So the fans are going to have to see that from the start off Michael and Nikita are not getting back together to fluctuating to having certain things happen in the episodes that make Michael think a little bit differently about his decision to not be with Nikita. You’re going to see that wrestle back and forth pretty much all the way to the end. So I certainly think the fans have that to look forward to. So there’s going to be some sadness. There’s some deaths involved. Multiple — though it may be just one significant one. It’s hard to say. Our own writers have consistently tweeted spoilers out and we have been, “What are you talking about?” Or they have made it look more dire than it was, then we got the script and we’re like, “That’s not that — okay, whatever.” They’re trying to mess with the fans.

What about the Amanda storyline? How does that fit into clearing everyone’s name?
SHANE: What we were learning with The Shop and Amanda, that becomes a huge thing as you could see towards the end of Season 3. It was becoming a massive thing and we were starting to realize that there were Shops all over the world. It wasn’t just something that you could crush. Then with the assassination of the President and that might not have been the President — a doppelgänger. That kind of stuff. You’ll find out that is a massive problem in Season 4. There might be more doppelgängers. There may be more doubles of main characters. And we play a lot with that. It would have been a lot of fun for 22 episodes, so we can only test it a little be with only 6 episodes. Mr. Jones has a bigger role, a much bigger role with Amanda and her stuff and there will be conflict amongst themselves. You just start to see the bitter-crumble of where Jones seems to be “screw this Nikita thing,” he sees that Amanda is crazy and that she’s never going to stop. He would just rather offer her a deal and you’ll see how demonic Amanda is with that and how she never wants to do that. So you’ll see the conflict with the villains as well.

Previously Amanda seemed a little more sane than some of the villains that they have come across in the past. So you’d think that Amanda would see that her path was diverging from their goals and think, “I’ve got to get rid of these people. Whatever they are going it’s not aligning with my goals.”
SHANE: I think Amanda is now — especially after that personal episode she had with Nikita — she’s pretty much off the rails. The side storyline with Amanda is that she really wants Nikita gone and I think that will be a part of her undoing this season. She’s not being as intelligent with it. She’s not being very corporate about this and Mr. Jones is. So that causes a major conflict. And I hope in Episode 6 the way everything goes down is the way that we have been told ’cause I think it’s a unique, different style of an ending. Maybe some people won’t like it, but I think most people will ’cause it’s a little bit different than the norm. But that could change in a week, who knows. (Laughs)

You described the final season as dark and probably sad atmosphere, maybe because it’s ending, but do you get to keep some of those light moments?
SHANE: Yes, for sure. Even in Episode 5, I have some comedy moments for once, which is odd. I’ll see how I play it. So, yeah, we’ve managed to keep that going. It’s a little less. It’s a lot harder to put that in this year. But we’ll have certain things like if it’s a Birkhoff scene to be able to bring up some stuff. Like he has a great storyline in these final 6 with finding a long-lost family member and what that brings to the table. Also, Devon and I have an episode where we get to go back and forth. So that makes it a little bit more light-hearted.

Do you think the fans will get closure? Will they be happy with how everything turns out?
SHANE: I think so far, so good. I hope for Michael and Nikita’s relationship that there is a positive ending for them. They’ve been so much in their own personal lives and they have been through so much together. To have one of them die or them not to be together just show a lot of failure and it just makes it a lot more sad and dark. I’m not quite sure Craig [Silverstein] necessarily wants to go that route. So I’m hoping to see a positive future for them. The fans maybe upset with some possible deaths. That’s pretty much all I can say. There’s always little things, like certain storylines with certain smaller characters that could have been developed a little bit more. But we didn’t have that time. So I’m sure certain fans will not be happy that we did not find out enough about this person’s backstory and stuff like that. But I think all in all, they will understand that we accomplished a lot, especially in five episodes.

With that encouraging note to start off the final season of NIKITA, look for the final six episodes to begin as of Friday, November 22nd at 9:00 p.m. on the CW. All six episodes will air consecutively on Friday nights, with the series finale scheduled to air on Friday, December 27th.