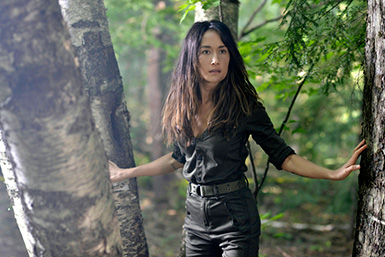 Season 3’s cliffhanger ending was a bit terrifying as Nikita was implicated in the assassination of the President – a plot that could have only been cooked up by the nefarious Amanda (Melinda Clarke) – making Nikita enemy number one, and the most wanted woman in the world.

So  Season 4 opens with Nikita on the run, fighting for her life and fighting to clear her name – not to mention the names of those she cares about.  In attempt to cut ties and keep Michael and everyone at Division in the clear, Nikita also left behind her engagement ring as a definitive sign that she was on her own.  It was a bitter moment both for her and for Michael when he found it.  This means emotions will be riding high on a personal note for both as the show returns.

In a press interview from the set, star Maggie Q teased a bit about what Nikita is thinking and what this final season of NIKITA has in store for the solitary spy.

The season starts with Nikita on the run and on her own. We’re hoping she will rendezvous with the rest of the team at some point, but is she on a solo journey this season and where is her mindset?
MAGGIE:  It’s not a very long season, that’s the thing.  Had it been obviously a regular season with as many episodes as 13 or 22, she would have probably been on her own for a while — maybe up to episode 6 or 8.  But in this season, she has to meet up with them soon since it’s over in 6 episodes.  So it’s all kind of on steroids and everything is kind of being pushed forward quicker than it would normally.

Is Nikita in a panic-state or does she have a plan?
MAGGIE:  She’s not in a panic. She always has a plan. So Nikita’s off solo with her own plan in mind and executing the way that she does, she doesn’t realize that the team is tracking her and trying to help even from far away.  Even though she doesn’t want it.

Michael is obviously upset that Nikita left the ring. What does that mean for their relationship?
MAGGIE:  He’s not happy with her obviously coming into the 4th season because the way it ended at the end of Season 3.  But I think it’s going to take a little time.  There’s not going to be any big reconciliation in the beginning obviously because there’s so many questions and so many hurt feelings, so I think he needs his time and she needs her time to sort of come out with why that was important and why she did what she did.  For Michael even to come to terms with the fact that she did it out of love — nothing else.

With Division being gone, how has that changed the dynamic on the show?
MAGGIE:  For me, it’s fabulous ’cause I hated being — you know what I mean? It’s like down the hall and all that.  It’s freeing.  Procedural and all that stuff, you’re always around the same table.  So I think we’re all happy to be out of that.  I loved how this season was going to start with what it was like back in Season 1, which was Nikita on her own, rogue, and by herself.  That was the stuff — that was when I fell in love with the show.  That’s what I sort of came into this doing and so that was fun.  And her breaking through that independent thing of “I can’t need anyone or whatever.”  That’s always been her sort of challenge and we’re right back to that because she is put into this situation and now she’s got to find her way back out of that.

Is Nikita ready to trust Sam again as he comes back into her life?
MAGGIE: Nikita does mention something in the first episode about Alex is tracking Sam or doing something with Sam and she says, “Sam’s here,” and it was funny the reaction that Nikita had in that moment.  She smiled and said, “Owen,” she doesn’t like to call him Sam and she says, “I know that you’re wary, but I don’t believe that I was wrong that there is a person in there that matters and you’ll find him.”  But she doesn’t have a lot to do with Sam.  It’s weird.  We have such a concentrated season, I haven’t even seen Lyndsy [Fonseca].

Amanda’s out there as well.
MAGGIE:  Exactly!  There’s so much she has to do that she doesn’t have time to see Sam this season.  There’s really no time for it.

With Nikita out on her own and rogue again, is she out to pursue Amanda, or does she have something else on her mind?
MAGGIE:  It’s really about clearing her name.  That’s really it.  It’s about: she’s got to clear her name and what’s funny about her is that it’s not about just clearing her name, it’s not about being known as a person who did this thing — it’s about:  “If I don’t clear my name, people that are close to me and who are tied to me, this will haunt them and will affect them.”  That’s really her motivation.  She wants it to go away so that they will be safe, and once they are safe she’s going to figure it out.

The Shop is going to have a big presence this year, and how Amanda ties into that.  Can you tell us about what those guys are up to?
MAGGIE:  Come on! It’s one of those things like if you open that can, all the worms fall out.  Even I read scripts over sometimes and I’m not sure.  I’m like, “Really? Really?”  I have to backtrack to understand where the web went and how it weaved which way.  But Amanda being involved, it’s clever on her part.  It gives her a certain amount of power that we didn’t quite realize in the 2nd and 3rd season when we thought she was this woman scorned and she was out to get Nikita because she had her personal reasons.  Now this is very different.  This is like world-domination Amanda, which is way scarier.

What is it like being a leader of this cast, especially in this final season?
MAGGIE:  I have to say, it’s weird. It doesn’t feel like it’s ending even though it is. The weird thing is I don’t even see this cast as I see this crew ’cause I work every day, whether it is with the cast or on my own.  So these people are my people.  They are my family and my friends and my confidantes, all of that.  So it’s that weird thing of not just leaving this cast and family of talent, but all the people that make it work that nobody sees — and nobody will ever know that it means the world to me.  I think being the leader of anything is a challenge.  It’s always a challenge. It doesn’t have to do with the amount of work or the effort you put in it because that should be a joy for you, if you have the opportunity.  But I think it’s more about being able to read people and understand how to make things work. I mean, think about all the different personalities we have on set and how that could go totally wrong, or be really beautiful.  It’s sort of learning people and finding that — it’s pretty crazy.

Nikita may feel alone in the world initially, but that will not last for long as her friends all rally behind her to clear her name and bring down Amanda and The Shop.  Be sure to tune in for the climatic conclusion of NIKITA’s final season, which begins Friday, November 22nd at 9:00 p.m. on the CW.  All six of the final episodes will air consecutively on Friday nights, with the series finale scheduled to air on Friday, December 27th.