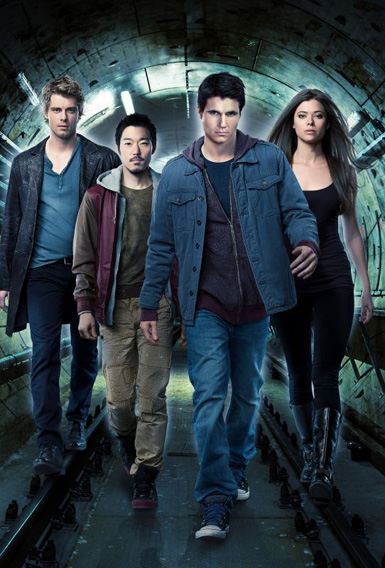 In the last episode as Stephen (Robbie Amell) was fighting for his life with a deviant criminal, he saw something significant: his father. Not only was Jack Jameson (Jeffrey Pierce) alive, but he gave Stephen a critical one word message: Thanatos. Just what is Thanatos and what does it mean? In this week’s episode, Stephen and his Tomorrow People cohorts try to unravel that mystery.

Significantly, this week’s episode appropriately entitled “Thanatos” explores two parallel stories. The first is the search for Thanatos, which takes them directly to Jedikiah (Mark Pellegrino); and the second, is a flashback look at the day John (Luke Mitchell) agreed to be transformed into an advanced version of the Tomorrow People – one that can kill. That pivotal day is seen both through Jedikiah’s eyes and John’s eyes and how that tragic day changed both their lives forever.

So while Stephen does what he always does, infiltrates Ultra headquarters and tries to get as much information as he can through their systems, and by asking one or two questions that may or may not raise some suspicion.

But for John, Cara (Peyton List) and Russell (Aaron Yoo), they have a different mission, to get into Jedikiah’s mind. Cara’s plan is to slip in while he is sleeping and take a peek at his memories while he is less guarded. Sounds like a nice plan, but inevitably something goes wrong and they are forced to bring Jedikiah back to their lair. Everything starts to fall to pieces around them as Jedikiah tries to blackmail John, Cara tries to keep from revealing that she still has her powers, and Russell tries to not be alone with Jedikiah and his mind tricks.

Two other players have vital roles to play in this episode as well: Morgan (Carly Pope), the Tomorrow People breakout that Jedikiah has stashed away; and The Founder, who makes a special in-person appearance to investigate Jedikiah’s kidnapping. There is something truly special about Morgan and it becomes essential that Stephen recognize that before Ultra descends upon her. Likewise, there is something very deadly about The Founder and seeing his power in action is terrifying.

With so many lives on the line, it is startling to see Jedikiah in action. Even held captive, he is not powerless. He is like a spider weaving a web from which no one can escape. The episode ends in a hail of bullets and the person who falls will shock everyone. The link between the past will finally catch up with everyone and it will cost one of our heroes dearly.

To see what master manipulations Jedikiah uses to get himself out of this tangled web, be sure to tune in for this week’s new episode on Wednesday, December 4th at 9:00 p.m. on the CW. It will make you rethink everything you thought you knew.