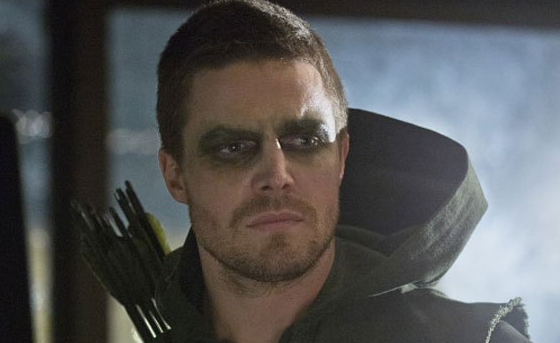 Oliver Queen (Stephen Amell) is not the only terse and succinct superhero on television, but he is the one with perhaps the biggest heart. He will literally do anything to protect his family and those he loves. We have seen him struggle time and time again to walk the line between vigilante and hero. He recently crossed back over to the dark-side in order to save his teammate Felicity (Emily Bett Rickards) when The Count (Seth Gabel) had her in his clutches, and Oliver snapped again when he thought that Roy may be endangering Thea – and an arrow through the leg was Roy’s punishment for daring to venture more into Oliver’s forbidden vigilante world.

In a recent press interview at the WBTV Mondo International Press Tour, star Stephen Amell briefly talked about the Oliver/Roy relationship and Oliver’s struggle to stop the killing in his quest to help the people of Starling City.

ARROW is on a fast-track right now and we’ve seen how Arrow decided that Roy (Colton Haynes) shouldn’t be on the team anymore. He’s gotten himself in a little bit of scrapes. So what is the dynamic going to be between them right now?
STEPHEN: That will not be resolved, but will be addressed immediately in this week’s episode. It did seem like a little bit of a rash decision by Oliver, but Roy flew too close to the sun, so to speak, ’cause he’s involved with Thea (Willa Holland), which is an absolute no-no. I’m excited to see — in Episode 9, we see more interaction between Oliver and Roy, but then it comes to a head by Episode 12. It was a really great opportunity for me to work with Colton, who I hadn’t spoken to that much. He’s great and I excited to see where that will go.

What has the transformation of Oliver been between Season 1 and 2?
STEPHEN: In Season 1, he was very much a loner and didn’t want any help. He wasn’t very particularly interested in any type of deep relationship and all that behavior cost him. So he’s trying to use that as an example of how to behave differently. He’s know more focused on doing good and not getting revenge and a lot more of the human elements are creeping into Oliver, which is nice for me to play.

To see if Oliver can keep up with his vow to stop the killing and yet still protect everyone he loves, as well as smooth things over between Roy and the Arrow, be sure to tune in for an all new episode of ARROW on Wednesday, December 11th at 8:00 p.m. on the CW.