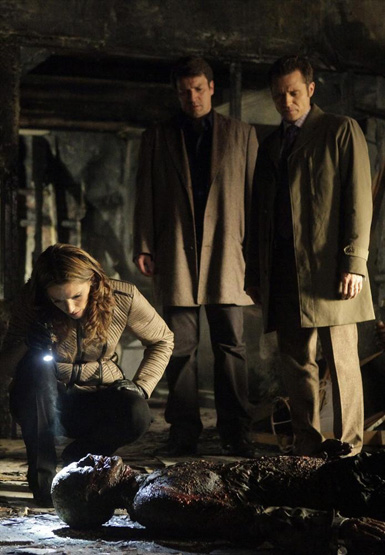 It’s a new year and that means the return of all our favorite shows! CASTLE returns tonight at 10pm on ABC. And since new years mean new beginnings, CASTLE is giving us the gift of new life. In tonight’s episode Under Fire, while the gang investigates a serial arsonist turned murderer, Jenny Ryan goes into labor. Break out the cigars because mini-Det. Ryan is going to make an unforgettable entrance to the world.

But will the whole CASTLE crew get to meet the newest Ryan? We got some scoop straight from Seamus Dever (Det. Kevin Ryan) and real-life wife Juliana Dever (Jenny Ryan). And from what we hear, Kevin might not get the chance to welcome his child. Seamus teased “It’s a very exciting episode. The moment that a lot of people have been waiting for: the arrival of Kevin and Jenny’s baby. They’ve given us the great challenge of putting Kevin in some peril. Not only may he not be there to see the baby, he may not be there at all anymore. “ Wait, say what? Det. Ryan not there at all anymore?? Seamus told us “Esposito and Ryan are trapped in a burning building. It’s interesting and I think a nail-biter. I think America is going to be nervous.”

Leave it to CASTLE to bring the baby drama. Kevin’s wife Jenny isn’t about to sit back while her husband is in danger, even if she is in labor. Seamus said “We get to see Jenny showing up at the crime scene, looking for Kevin. She doesn’t want to leave his side, she’s worried. She’s definitely not going to the hospital.” Juliana chimed in, “The core cast is there for the birth.” So will this be like FRIENDS, when the whole gang is there to welcome the baby? Juliana set us straight. “It’s is far too dramatic to be considered light-hearted.”

It looks like baby Ryan isn’t the only special appearance we’re getting this season. We got some teasers on guest stars to be on the watch for, like Castle’s spy daddy James Brolin! Seamus gave us a couple of tidbits. “We see James Brolin come back. That was pretty cool to have him.” Did you know that Seamus Dever and James Brolin have a connection from years before CASTLE? Seamus laughed, “I worked on his show. It was my very first job, on PENSACOLA: WINGS OF GOLD back in 1999. Considering that he remembered me was kinda cool.”

We wanted to make sure to find out what else to look forward to in the second half of this season. Seamus gave us a few hints. “We’re about to come up our two-parter and we usually have a really interesting guest cast for that, because the stakes are high. There’s a fun fashion episode, a Devil Wears Prada-esque episode that’s coming up, where an assistant to someone who is really high up on the food chain in the fashion world gets murdered. There’s also something we haven’t done in a while where a teenager gets murdered. There’s some pretty good guest stars in that one too. There’s also something interesting, always some area or niche that we haven’t dealt with yet that comes up in CASTLE.”

Be sure to catch tonight’s all new episode of CASTLE at 10/9pm on ABC.