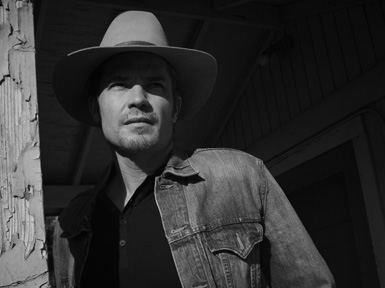 Returning to its Florida bayou roots, JUSTIFIED starts off its fifth season with a slight detour down memory lane for Raylan Givens (Timothy Olyphant). Raylan is asked to take a trip back down to Florida’s everglades to lend assistance in a case where an off-duty customs officer was shot, and who may have had ties to the infamous Crowe family – more specifically, kin of Dewey Crowe.

The first episode of the season is cheekily called “A Murder of Crowes” and introduces Dale Crowe, Jr. (Michael Rappaport), Danny Crowe (A.J. Buckley) and Wendy Crowe (Alicia Witt). As Raylan knows deep down in his bones, any Crowe is a murderous Crowe. They just cannot seem to keep away from dangerous criminal enterprises that ultimately backfire and leave many dead bodies in their wake. Unfortunately for Raylan, he has been called as a witness in the case of Dewey Crowe against the government for the abuse Dewey suffered during Season 4’s hunt for Drew Thompson (Jim Beaver). This means Raylan needs a little cooperative assistance from Dewey before he can get on track with the elusive Florida Crowe clan. Between Dewey’s court case, a swimming pool, and Raylan’s winning ways, Raylan is soon on his way to Florida.

Meantime, back in Boyd Crowder’s (Walton Goggins) world, all hell is breaking loose, as usual. Ava (Joelle Carter) has been arrested for the murder of Delroy (William Mapother) and Boyd will do anything to get her out. But Boyd’s sure-fire plan to tap on the shoulders of slimy businessman Lee Paxton (Sam Anderson) to get the judge to release Ava is certain to back-fire. Like most proposed business arrangements between two wary criminals, it requires a level of trust that they have not yet quite established, which leads to all kinds of sure-fire problems.

In addition, Boyd is looking to work with Wynn Duffy (Jere Burns) in taking over the heroine supply in Harlan, but working with the feuding crime bosses in Detroit is guaranteed risky-business. Criminals just do not know how to work together for a common good – even when it means they can make a lot of money together.

So JUSTIFIED returns for its fifth season with looks of explosive enterprises set to blow up in everyone’s faces.

At the premiere, the cast took a few moments to chat and tease what Season 5 holds in store for all our heroes, anti-heroes, and outright criminals in Harlan and beyond:

Only one thing is ever certain in JUSTIFIED, the last man standing will be the one willing to do whatever it takes to win. Fortunately for Raylan, having been raised by an outlaw, he knows how important it is to win at all costs – and he’s got that trusty Marshal’s badge and a few skilled comrades to call upon when needed, both of which give him the winning edge.