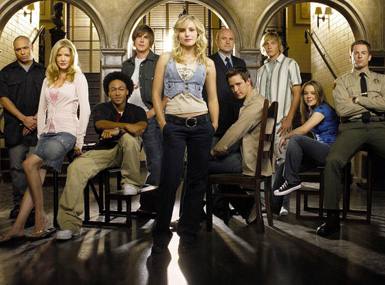 Wondering how you might possibly jump on the VERONICA MARS bandwagon prior to the movie’s March 14th debut? Well, wonder no more… because Amazon has just announced that they’ve signed a deal with Warner Bros. domestic Television Distribution to be the exclusive streaming home for all three seasons of the brilliant-but-canceled television series. See for yourself, after the jump.

PRESS RELEASE: Amazon.com, Inc. today announced that Prime Instant Video will be the exclusive online-only subscription home for streaming the TV series Veronica Mars in a deal with Warner Bros. Domestic Television Distribution. Beginning today, Prime customers can enjoy all three seasons of the popular Warner Bros. Television series starring Kristen Bell, and get caught up just in time for the March 14 debut of the Veronica Mars movie.

“The Veronica Mars series has been popular on DVD and Amazon Instant Video for years, so we know how much Amazon customers love this iconic television show,” said Brad Beale, Director of Digital Video Content Acquisition. “We are excited to become the exclusive subscription streaming home for Veronica Mars and to be able to offer the entire TV series to Prime members to enjoy at no additional charge. With the movie coming on March 14, both die-hard fans and new viewers can easily catch-up on this great show.”

“We are thrilled to have Prime Instant Video as a digital distribution outlet for the Veronica Mars TV series,” said Ken Werner, President, Warner Bros. Domestic Television Distribution. “Digital distribution platforms such as Amazon’s and licensing deals such as this allow the consumer great opportunities whether they’re die-hard fans who just can’t get enough or a new consumer turned fan who has discovered a fabulous show with dozens of new episodes.”

The Veronica Mars movie is coming to select theaters nationwide on March 14th and was made possible by a record-breaking Kickstarter campaign driven by fans of the television show. Launched by Rob Thomas and Kristen Bell, the Kickstarter campaign unleashed an unprecedented level of fan enthusiasm and support, reaching the project goal of $2 million in just 10 hours. At the end of the 31-day campaign, fans contributed $5.7 million, making Veronica Mars the number one funded project in the film category and the third-highest funded project in Kickstarter history. It is the most widely supported Kickstarter campaign ever with more than 91,000 backers, who have remained engaged throughout production with frequent behind-the-scenes updates from Thomas and the film’s cast and crew. Amazon Payments handles all the payment processing for funds raised on all Kickstarter projects in the United States.

Veronica Mars is an American television series created by screenwriter Rob Thomas, which first premiered in 2004. The series is set in the fictional town of Neptune, California, and follows a high school student (Kristen Bell) who moonlights as a private investigator under the tutelage of her detective father.