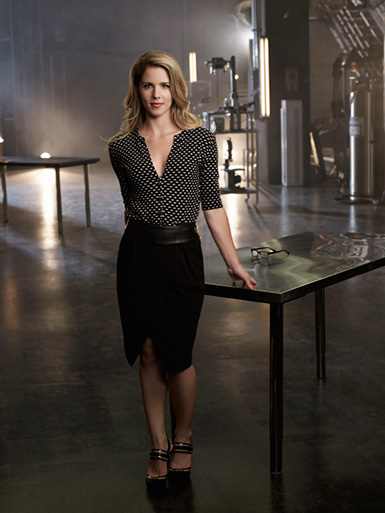 Behind every great man is a woman. This especially holds true on the CW drama ARROW.  Where would Oliver Queen be without his trusty teammate and computer-whiz, Felicity?  In a press interview at the Warner Bros. Mondo International Press Tour, star Emily Bett Rickards talked about the evolution of her character and how she thanks her lucky stars every day for such a dream job.

Felicity right now is kind of torn between a couple different men in her lives.  If you could offer her some advice about these men, what would you give her?
EMILY:  I would say, “Follow your heart, and don’t make it too dramatic.  Your best defense mechanism is to not get tangled.”  I should probably listen to that.

Are you glad to see her getting away from her computer a bit more?
EMILY:  I am.  I think it’s really important for her as a person as to grow because if she’s hiding behind that screen all the time, she’s not really going to grow, I don’t think, a whole lot more.  I mean, she’s very smart, and she can problem?solve and figure out as many problems as she can on her computer, but people are a totally different species than computers.

What has been the evolution of your character?  How did she change from the first season to this season?
EMILY:  More confidence, definitely stronger, has more of an idea about the role she’s playing within the group, I think.  Being able to brainstorm and have more of a say and more of a weight in the group. Being a part of a group alone, she’s never been in a family like that or in a friendship like that.  So she’s definitely becoming independent in a very strange way. I think we all identify and find ourselves amongst other people, and other people help us grow.  I think that’s really happening for her.

What did you learn from Felicity?
EMILY: I think as she becomes more brave, she’s sort of teaching me how to become a little bit more courageous.  She’s just got this very solid idea of what is right.  Like she has a very interesting way of perspective because she’s always learning from Oliver (Stephen Amell) and Diggle (David Ramsey).  But she’s definitely holding her ground, especially in the second season.  I think I’m growing with her too, because my life has changed a lot in the past year, and so has hers.  And I think being able to view other people’s perspectives ?? and, hopefully, I can do that as well ?? while keeping your feet on the ground and keeping your own sort of steady mind is a lesson that we could all use.

For you, how has it been working on the show for two seasons?
EMILY:  It’s great.  I mean, my life has changed.  I mean, I’m getting to do what I love.  And I’ve made a lot of really good friends and gotten to work with some really, really talented people, people I’ve always wanted to work with.  It’s been a dream.

Do you like watching television shows on Blu?ray, DVD, digital?
EMILY:  Oh, yeah, absolutely.  I like to binge?watch.  So when things come out, like SCANDAL is on Season 3 right now, so I’m waiting for all of the episodes of Season 3 to come out so I can watch it all within, like, a two?day period.  That’s what I like. How do you watch one and then wait another week?  It’s so hard.  You’re thinking about it all week.  I wouldn’t get any work done. (Laughs)

You were originally just going to do one episode and now you have a regular role.  So what’s the whole story behind it?
EMILY:  I went in for one audition, and I hadn’t seen those casting directors in forever.  And then a few hours later, I was at work.  I used to work at this dog shop where me and my dog would just chill and hang out, and I would run lines behind the counter with my feet up on the table.  And I got a call saying I was on hold, and that was great, and I just went in and did the one day. Then they called me back, and then they called me back again a couple weeks later.  And it just sort of grew, and all of a sudden this term of “regular” was being thrown around, which meant nothing to me at the time because I didn’t understand what it meant.  And here I am, living the dream.

All new episodes of ARROW air Wednesday nights at 8:00 p.m. on the CW. (CTV in Canada)