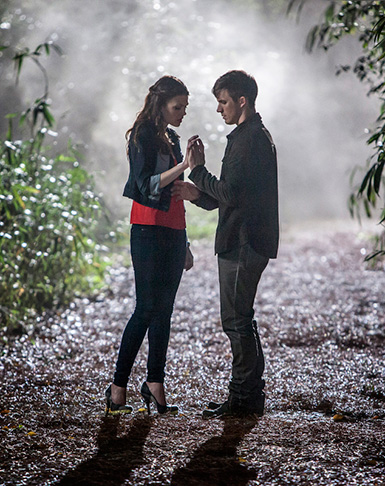 Flash-forward 10 years later and everyone has come to accept that the aliens, known as Atrians, are not going anywhere. Their spaceship was destroyed when it crashed and no one has ever come to rescue them — the Atrians have been either abandoned or are alone in the universe.

So STAR-CROSSED’s story is set in the near future on Earth, and tells the tale of the desire to try to get the Atrians, who have now resided in forced-isolation for 10 years, to try to integrate with human society. Seven Atrian children are selected for an integration program at a local high school, and the story picks up as they are greeted with outright hostility on Day One at the selected school. It is a day of great pride for the Atrians, but there is great fear on both sides as the 10-year separation between the two cultures has not encouraged friendships or understanding.

But as seen through the eyes of a young Atrian boy and the young teen girl who met briefly 10 years earlier on that fateful day, there is an unspoken kinsmanship and bond between them. That moment of mutual understanding and kindness has stuck with them during the past decade and it sparks anew when they are reunited. As the story introduces Roman (Matt Lanter) and Emery (Aimee Teegarden), it is heart-warming to see them rediscover their friendship, and perhaps something more, as their destinies become intertwined once again.

Yet not all Atrians and not all humans are eager to bridge the gap between the two species. Atrians may look human, but there are differences. For example, Atrians have birthmarks that look like tattoos that distinguish them. They also have another key physiological difference, one which was key in saving the young Atrian boy’s life when he should have died on the day he was captured. There are also whispers that the Atrians have special abilities or have access to a miracle cure. Separation has not only fueled fears and speculations, but it has heightened everyone’s wildest imaginings as to what exactly the aliens can do.

Only one thing is certain, the Atrians are not going anywhere. Wherever they came from, no others have arrived. Naturally, the Atrians are circumspect about the circumstances that led to their spaceship crash landing on Earth. Were they on a scouting expedition, were they being chased, or was it just an astrological fluke that they ever came near Earth? Ten years is a long time and in the absence of signs of anyone else out there in the universe, Earth has slowly come to recognize that they need to make peace and learn to live with the Atrian visitors. Earth has become their home too.

For now, there also seems to be bit confusion amongst the genre fans. Based on general description alone, initial comments about STAR-CROSSED have been that it is a ROSWELL-clone or an attempt to continue the ROSWELL storyline without the original cast. But nothing is farther from the truth. STAR-CROSSED may have aliens and it may feature a romance between an Earth girl and an alien boy, but that is where the similarities end.

STAR-CROSSED is the tale of the growing pains of trying to assimilate another alien culture into the existing status quo. ROSWELL never even tried to broach that global topic. ROSWELL was all about aliens hiding amongst us. It made the assumption that humankind would never accept aliens as equals and it took great pains to make sure that very few humans ever even knew about the possibility of an alien species living out in the stars. ROSWELL simply presumed that mankind was just not ready for the reality of extraterrestrial life. It was about hiding and running.

But in STAR-CROSSED, it is all out in the open. Everyone knows there are aliens from another planet living amongst them. They have had time to adjust to that ego-centric surprise. There is no running and hiding. It is all about whether humans will finally welcome the Atrians into their homes, their schools and into their lives. It forces each of the characters to assess their relationships with each other and to see if their curiosity and attraction to something so unknown will overcome their fears and prejudices.

STAR-CROSSED explores inter-species attraction in a beautiful and romantic fashion. But it is not just a story of young star-crossed love. It is the story of the tensions that are bubbling under the surface as factions on both sides want to disrupt the attempts to integrate. There are the Trags amongst the Atrians, purists who believe that humans will only ever see them as animals or sub-human; then amongst the humans there are the Red Hawks, those who believe the Atrians are still here to conquer – that this is just the beginning of a long-term plan for invasion. If only we could all live in peace together. But peace remains elusive and both sides will have to quash the warring self-preservation instincts of the Trags and Red Hawks.

Roman and Emery would love to just be a boy and a girl falling in love. But with the weight of both their species seeming to rest on their shoulders, each must consider whether their budding romance may be the spark that sets off an inter-species war. Plus, there are other rivals for their tender affections and the temptation to pursue other more accepted relationships shall test the strength of their feelings as well. However, one significant fact revealed right away is that Atrians only fall in love once in their lives; like swans, they mate for life. Thus, there is only one true soulmate for an Atrian – and Roman believes he has found his in Emery. Human or not, he knows that his heart will be true.

So with tensions at near breaking point, covert strikes being made on both sides, and one epic love-story about to ignite a war 10 years in the making, STAR-CROSSED shall explore whether alien/human integration is even possible. Will friendship and love conquer fears and build bridges towards understanding and acceptance?

STAR-CROSSED is a story of teen romance, the trials of life in high school, and best of all, the secrets everyone is hiding. Roman is not just a young Atrian boy, he is the destined leader of an alien race. Whether he is ready to take on the mantle of leading his people is a decision he will have to make when the time comes; and with treachery on all sides, Roman has to think about how to best keep his people safe.

Similarly, Emery is not just a teen girl; she is one that has just recently recovered from a grave, life-threatening illness. She knows exactly how precious every second of life is – particularly with her best friend Julia (Malese Jow) still fighting for her own life. If the Atrians do have a miracle cure, they are going to find it.

As for the rest of Roman and Emery’s respective friends and frenemies, no one is exactly who they seem. Everyone has a secret. Viewers will meet on the Atrian side: Sophia (Brina Palencia), Roman’s sister, the lovely, awkward teen who just wants to fit in and will do just about anything to feel a part of the world around her; Teri (Chelsea Gilligan), the vivacious Atrian who knows in her heart that Roman is her soulmate and who is determined to find a way to make him believe it; and Drake (Greg Finley), a reformed Trag who is quick to protect his friends and yet cannot help but find himself in the thick of brewing trouble. Then on the human-side, there’s not only Emery and Julia, but their friend Lukas (Titus Makin Jr.), a happy go-lucky-guy who just wants to be everyone’s friend and for everyone to just get along; Grayson (Grey Damon), the golden boy who wants to sweep Emery off her feet, even if it means befriending her Atrian friends; and Taylor (Natalie Hall), the queen bee of school, whose sense of style only tops her ability to make or break social circles.

Then as if that were not enough to get the storylines buzzing, STAR-CROSSED quickly introduces a few adult characters to keep things hopping in the mix, including Roman’s politically-motivated uncle Castor (Johnathan Schaech) and an ambitious SEU Officer Jack Beaumont (Tahmoh Penikett); both who become actively involved in everyone’s lives starting in the second episode.

If Roman and Emery had their way, STAR-CROSSED would be just a love story and it would be epic; but alas, life is just not that easy. So their story will involve a lot more cross-species politics, spy shenanigans, and covert actions than they should normally have to deal with as teenagers. Fortunately for viewers, it makes for a fun concoction of adventure and drama all spun together with a dash of lovely romance to keep it intoxicating.

To discover this wonderful series, be sure to tune in for the premiere of STAR-CROSSED on Monday, February 17th at 8:00 p.m. on the CW.  (To read more about the series: STAR-CROSSED Scoop: Executive Producers Adele Lim and Meredith Averill Talk Bringing A Mysterious Alien Culture To Earth)

Be also on the look-out for our exclusive video interviews with the cast, which we will be posting that shall provide more fun insight into each of their characters in the next few weeks. In the meantime, here’s an interview with star Matt Lanter from last summer’s San Diego Comic-Con as he explains whether Roman and Emery are destined for each other (video at 8:25):