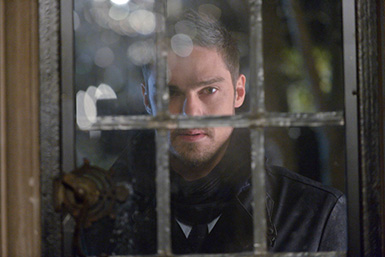 After pondering about a recent inquiry about how I was enjoying this season of BEAUTY AND THE BEAST, it brought me to one startling realization: the hero I have loved seems to have disappeared. Season 1 introduce us to the isolated, lonely Vincent Keller (Jay Ryan), a man in hiding for 10 years with his best friend searching for a cure to the heinous government experimentation subjected to him during his military tenure.

Throughout Season 1, it was a joy to see Vincent shedding some of his fear and loneliness as he made tentative steps to reclaim his life with the aid of Detective Catherine Chandler (Kristin Kreuk). By the end of the first season, he was a strong, admirable man willing to risk anything and everything to protect not only Cat and his best friend J.T. (Austin Basis), but anyone else he deemed under his protection. Vincent had shed that cloak of self-protection invisibility and self-determined isolation in favor of embracing those he cared about and welcoming them fully into his life.

But Season 2 brought back a very different Vincent Keller. After being captured in the Season 1 finale, Vincent was subjected to even more government experimentation and this time they were not content with manipulating his genetic make-up, they delved deep into his psyche as well. In fact, they wiped every memory of his past life.

As fans, we were confident the show would returned Vincent’s memories, and to an extent they have — albeit in a piece-meal fashion – and no one really ever doubted that the Vincent we knew and loved would be completely lost. That, underneath it all, he was the same man. The mind-wipe was only to block the memories, not erase them; and each one came back when exposed to the right memory-trigger.

But what became much more alarming was that fact that Vincent in Season 2 was an entirely different person. His values, morals and the essence of who Vincent was in his soul seemed dramatically altered. He was a government-programmed killing machine. He never once doubted or questioned his missions to eradicate the beasts he was sent to kill. He only had one objective: complete his mission.

In the end, he did just that – and with ruthless precision. But was the cost? It seems to have cost his soul.

The beasts that Vincent was assigned to kill are now gone. The government agency responsible for creating them is gone. The man who wielded Vincent like a weapon is behind bars. So why then is Vincent still so altered?

Was it the awakening of something primal deep within him when he met Tori (Amber Skye Noyes)? Did the fact that Tori was perhaps born a beast trigger a deeper, darker side to the beast within Vincent? Shouldn’t we then see a battle inside Vincent – the man who he is in his soul versus the beast implanted in him? In Season 1, that struggle was acutely felt every day of his life. We never doubted that Vincent was the man and that the beast was just an infection that he struggled to contain and eradicate.

Yet now, it is as if the beast has taken over. Vincent no longer struggles for his identity, he has surrendered to it. We see a beast wearing the shell of a man, not a man fighting the beast within. That beast is quick to anger, to lash out, to give in to his beastly nature and desires. It does not question whether being around Tori is hurting him and costing him his humanity. The beast simply does not question or care.

But we, as fans and viewers, are bewildered. Where is the man that we rooted for so unquestioningly? Where is Vincent Keller?

Season 2 has been a confusing, trying season as we have tried to trust that the writers would return the Vincent that we knew and loved. But instead, they gave us an imposter. A beast masquerading as a man. A beast wearing Vincent’s face and who has stolen his life. A beast that owes no loyalty, friendship or love to everyone that was important to Vincent Keller. He barely tolerates J.T.’s friendship and overtures of finding a cure. He is outright antagonistic towards Cat, his former true love and soulmate, goading her to the point forcing her to shoot him. He only goes through the motions of what is expected of him. He will only save a human life if it is in his best interests. The Vincent Keller we knew from Season 1 would have willingly sacrificed himself for others without question. The self-interest oozing from the Season 2 beast-version of Vincent is repulsive and disorientating. In our hearts, we know this is not Vincent Keller.

This is perhaps why we feel that Season 2 is still the search for Vincent Keller. The beast that came back is not the man we know and love. It is something else. It is someone else.

So I again ask: Vincent Keller, where are you? When will you come back to us? Are you gone forever? We are anxiously awaiting your safe return so that we can banish the beast pretending to be you. He is not human. He has no heart. He only wears your face.

Please come back to us.

To see if our prayers are ever answered and Vincent does return, be sure to tune in on Monday nights for all new episodes of BEAUTY AND THE BEAST at 9:00 p.m. on the CW.