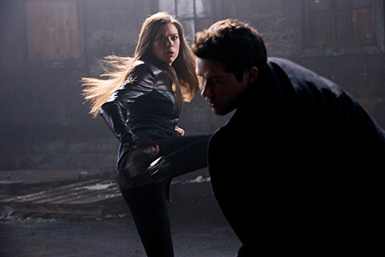 Now that Cara (Peyton List) has been voted the boss in charge for the Tomorrow People, things have been a bit more tense and tricky for her. No longer able to coast on her anger and frustration, Cara must be a leader and put everyone else’s needs above her own. This newfound position has been both a blessing and curse for her, but Cara has stepped up and been surprisingly successful in it.

In an exclusive interview, star Peyton List talked about the awakening of Cara as the leader of the Tomorrow People and how that has pushed her to reevaluate all the men in her life.

This last episode was so much fun. Was there something that stood out for you that you particularly enjoyed from that episode?
PEYTON: I loved it that we saw more of how Astrid (Madeleine Mantock) gets exposed by knowing about the Tomorrow People world. You can only keep secrets in this Tomorrow People universe for so long before it comes to a head. I thought last week’s episode was just explosive because everything finally caught up with the Stephen (Robbie Amell) and Astrid relationship. We loved shooting it and had so much fun with Madeleine and I getting to fight together. We just had a blast.

Did you look at the props guy at some point and say, “How come I don’t get to keep the gun?”
PEYTON: Oh, yeah! But honestly, those guns were so big and intimidating that I was happy Madeleine had to do the gun fighting. I’ll stick with the punching and kicking.

Are you having a lot of fun portraying Cara right now? It seems like she has grown so much this season.
PEYTON: Absolutely! We’ve watched her go through a lot of changes. Obviously, the biggest change is she has stepped into the role of leader. But we have also watched her outlook sort of shift quite a bit. She was very head-strong and stubborn and had her opinions about Tomorrow People versus humans and how everything should be dealt with in black-and-white terms. It was very cut-and-dried. But for the past year, those opinions have been challenged, whether it is by humans who are good at the core and deserve protection, or Tomorrow People who are not better people simply because they are Tomorrow People. It sort of challenged her beliefs, and what’s right and what’s wrong and where the gray area is.

Is Cara enjoying being the boss of the Tomorrow People, or is she kind of thinking that John should be taking it back?
PEYTON: I think it has been interesting for her because when John was leader she was constantly questioning him and constantly challenging him. She just would not understand why he wouldn’t see it exactly the way she saw it. I think that now that she has stepped into the role of leader, and she’s wearing John’s (Luke Mitchell) shoes, so to speak, that things have totally changed. She’s sort of becoming more like John and realizing that what decisions she would have made if she wasn’t leader isn’t a decision she can make as leader. You have so much more responsibility for safety to take into account. So it changes how you look at things. And I think she’s struggling with that, a bit; and the only person who can only help her and advise her is John. She’s sort of taken John’s role away. So it causes a different dynamic for them, as characters, because when he was still clearly the leader, they could be together romantically and have this relationship when they knew what their roles were. Now that they have shaken everything up, it is starting to effect them in ways that they were not really prepared for.

So does that spell doom for John and Cara’s personal relationship, or will they be able to work through it?
PEYTON: It could kind of go either way. They do live in a very isolated world, and it helps them work through a lot of issues. It forces them to constantly deal with things, like when Cara and Stephen were together. They cannot just go out into the world and avoid each other. They have to face it and they have to try and work through it. Cara still hasn’t forgiven John for everything that he did and in hiding Roger’s (Jeffrey Pierce) death. But they are taking it one step at a time. They can’t really hold grudges too long because they are so dependent on each other — all the Tomorrow People are for each other’s survival. So I think they are trying to get to a good place, but then there are constantly, everyday, new challenges thrown in that might throw a wrench into any sort of progress they have made. Going forward in this week’s episode, we see Cara still trying to find her feet as leader, and figuring out what works and what doesn’t and sometimes having a completely different opinion on what’s right and wrong from John, with her now as leader that changes things drastically.

Do you think at this point that Cara is leaning more towards John or Stephen, on the romantic side of things?
PEYTON: You’d think that if she was having friction with John, she would go to Stephen for support. But what is interesting about Cara as she stepped into a leadership role is that really hasn’t happened. She’s not going to the other guy, when with one guy it’s not working. She’s having to go to herself and she’s having to sort of look inward and try to make peace with making her choices and her decisions and sticking to them no matter what will happen. She has her own issues with Stephen and the choices that he makes — like in the beginning when he went to work with Ultra. Stephen makes his own decisions and doesn’t always do what Cara wants him to do. So that’s not a completely harmonious relationship either. When he was convinced that Peter, his mom’s boyfriend, was not normal, Cara did not think that anything was wrong and she wasn’t going to do what Stephen wanted. So there’s always going to be friction ’cause all of these characters have very strong beliefs in what is the best way to do things. But with Cara as the leader, she expects that they have to fall in line. Whether they do or not, that could cause some problems.

And now Astrid is there amongst them as well. That was an unexpected turn of events. Astrid’s got to stay with the Tomorrow People. She can’t go home. How does Cara want to deal with that situation?
PEYTON: It’s totally a different dynamic. For the first time, there’s a human down in the underground subway lair. Up until this point, we’ve seen so much of Astrid’s life as being a totally normal human. Stephen had a somewhat normal life when he broke-out, but he adjusted to the Tomorrow People world very quickly. Whereas, Astrid is a normal teenager and has normal dreams and has goals and hopes for her life. We also know that she has a great relationship with her father. It was heart-breaking when you hear her talking about, “I’m stuck down here and what about my life?” It’s hard because Cara knows — even though they haven’t touched on it much yet in the story — it’s pretty much what all the Tomorrow People went through in leaving their lives behind. You just feel it more with Astrid because we have seen so much more of her normal life, and now it has been taken away from her indefinitely and now she’ll have to deal with that.

Is Cara going to be teaching Astrid some basic self-defense skills because Astrid is completely defenseless as she doesn’t even have any powers?
PEYTON: Astrid doesn’t have any powers, but she did okay with the gun. So she may be better off than we thought. They did manage to make it out of there. But it is a tough situation to be in. She doesn’t want to be there and she has to be for her own safety — and Stephen, John and Cara all agree on that. (Laughs) That may be the one thing that they all agree on. But it’s tough and we’ll see Astrid, as a character, deal with that. What will come of it is that she’ll get a better understanding of the Tomorrow People. Up until this point, she had really only been a part of Stephen’s life and everything he has had to deal with. She sort of knows about the dangers he faces, but when she’s down in the subway lair, she’s very much a part of the Tomorrow People world and she sees the day to day things that go on and it’s an interesting turn. She kind of makes the two worlds collide even further.

One of the things that viewers picked up on was the chemistry between John and Astrid, their scenes were just quite beautiful. Is Cara going to be picking up on that?
PEYTON: On this show, it’s always hard to tell. We have those big romantic storylines, but we also have all these high stakes and these explosive situations where you sort of have to put personal stuff aside and just deal with the now. So we may see the exploration of the relationship between Astrid and John, but whether Cara picks up on it or not, that sort of remains to be seen. She’s got so many other problems going on. What we do know is that things aren’t entirely harmonious between John and Cara right now because of choices that are made and because she, for better or worse, is the leader now. So a lot of different conflicts are happening in this confined space.

And Cara has to deal with the Luca situation. Is Cara ready to deal with Luca as a break-out?
PEYTON: That is the one thing that has been consistent with the Tomorrow People, and what they focus on is bringing in new break-outs and protecting people that they find and just bringing them into the fold and building their numbers. That’s the one thing that they’ve always done. They are always on the look-out for more Tomorrow People. So it’s very interesting that Luca is breaking-out. For one, they’ve never had two siblings down in the lair and for another, they are still searching for Roger. Everyone sort of has a different opinion on that. But the fact that another one of Roger’s children could be a break-out completely throws a huge wrench into the mix.

To see how Cara continues to balance all the spinning plates of the search for Roger, Luca’s break-out and the new lair houseguest Astrid, be sure to tune in for all new episodes of THE TOMORROW PEOPLE on Wednesday nights at 9:00 p.m. on the CW.