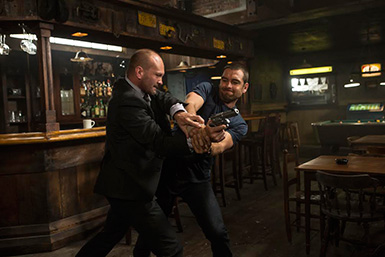 After last week’s simultaneously shattering and stunning episode, “The Truth About Unicorns,” where Hood (Antony Starr) and Carrie (Ivana Milicevic) tried to take a break from their insane lives and envision what their future could have been in their dream house – only to have it literally go up in flames after Rabbit’s sniper took out Agent Racine (Zeljko Ivanek) – this week’s new episode “Armies Of One” is a return to the chaos wrought by all their intersecting lives in BANSHEE.

In an explosive and deadly episode this week, Hood (still feeling a bit reflective from watching his dream evaporate in all those flames) wonders if man is capable of change or if he is fundamentally doomed to live the life before him because he cannot change.

When a dangerous mob collector crosses path with Hood looking for Jason (Harrison Thomas), Hood has to consider the best way to handle getting Jason out of the mess he created. Will money buy Jason’s freedom or will Hood have to eliminate the collector in the ultimate showdown?

In a parallel story, Hood is forced to assess whether it is finally time to cut and run himself as the noose of Banshee seems to be closing in around him. Will those $10 million in diamonds be enough to give him the financial means to escape Rabbit’s wrath and reach? And should Hood consider taking Carrie with him since her life has blown up so spectacularly?

Then sniffing around, sensing something is amiss in Hood’s world is Deputy Brock Lotus (Matt Servitto). He knows that Banshee was always a dangerous town, but the body count has risen astronomically since Hood came to town. With a sheriff willing to meet violence with violence, confrontations with the criminal element have been decisively dealt with, but with lethal consequences. Brock knows in his bones that something is very different about their sheriff and he is not sure exactly what it is, but he is determined to find out.

So with Rabbit playing a slow game of “death by a thousand cuts” to torment both Hood and Carrie, the FBI trying to use Hood as bait to lure out Rabbit, Hood’s own department unsure of his leadership as sheriff, Carrie’s husband Gordon (Rus Blackwell) close to discovering the full truth, and plenty of criminals popping up each week ready to unleash a bit of pain at Hood’s expense, BANSHEE has just gotten a bit too hot for Hood. And that’s not even taking into account Kai Proctor (Ulrich Thomsen) and Alex Longshadow’s (Anthony Ruivivar) war that tends to ensnare Hood at every opportunity. Just how invested does Hood want to be in these multiple worlds as they continue to collide? Is it worth it to stick around for the few scraps of contact Hood has with his daughter Deva (Ryann Shane) or to be the town’s protector against the evil forces licking at their doorstep?

To see what answers Hood’s time of reflection provides, be sure to tune in for this week’s all new episode of BANSHEE on Friday, February 14th at 10:00 p.m. on Cinemax.