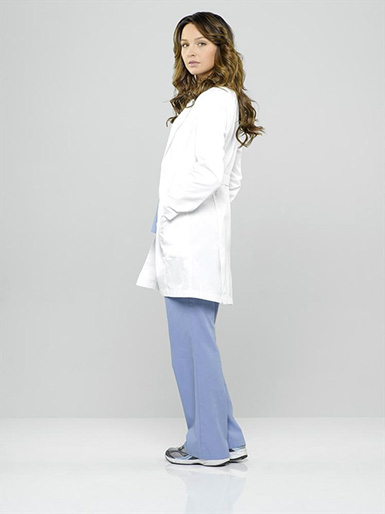 I spoke with passionate actress, Camilla Luddington about her role on ABC’s famed drama GREY’S ANATOMY. Light-hearted and enthusiastic, Camilla describes embracing the changes of a new season, the chemistry between “Jolex” and her role as Lara Croft in the iconic Tomb Raider video game franchise.

The show left off with quite a few cliffhangers; can you tell us anything about tonight’s premiere?
Camilla Luddington: The premiere kicks off right where episode 12 left off. I obviously can’t say who April (Sarah Drew) picks or if she picks anybody, but I can tell you that Jo is really mad at Jackson (Jesse Williams) because he humiliates her friend and in the very beginning of the episode she’s sort of dealing with the aftermath of Stephanie (Jerrika Hinton) being in complete shell shock. She wants to be a good friend and be there for her but when they get back to the hospital she finds out that Karev’s dad had this terrible, terrible surgery in which Shane (Gaius Charles) was in charge of and screwed up on, so they are sort of dealing with his father also. So her time is a little bit split because she wants to be a good friend to Stephanie and also a good girlfriend to Karev (Justin Chambers). That’s essentially when the episode starts for her, then later in the episode she realizes that she was perhaps proposed to on that wedding day and realized she may have accepted that proposal and that causes of course lots of drama.

Like you said, Alex practically proposes, and confesses his love to Jo. He says he wants kids and a life with her. Do you think all of that will happen? Do you think they could make it work?
Yeah, I think I do sort of see that future for them, I think that for Jo though it’s just way, way too early. I think that’s something she takes very seriously and I think from her point of view she grew up without any parents so she never really saw a good, happy, married couple. She never grew up in that family unit, so for her I think it’s territorial just a little bit. And it’s not something she takes lightly, I mean I think she wants to get married I just think it’s not right now. But I can see them somewhere down the line doing that. I mean Justin (Chambers) and I even joke sometimes that they’ll get married and they’ll end up ordering pizza that night, and that’s how they’ll celebrate and it will just be so them. But I just think it’s not right now, and also I feel like that proposal came out of a place of Alex feeling overwhelmed by everything that was going on and I think in those moments, yes your true feelings come out, and I do think he loves her and wants those things with her but I think that she feels like he may not have quite that declaration in that way, had his dad been okay.

How was your audition for the show? Did you know you were auditioning for Jo, or that you would become a series regular?
What’s funny is I first met Shonda (Rhimes) because I casted a pilot for her, I think maybe a month before that I was on TRUE BLOOD but I tested for a pilot she was doing called GILDED LILYS and then I was actually going to miss the audition. I remember my manager saying “oh there’s an audition for this new possible series regular character of a major recurring character on GREY’S ANATOMY and you’re going to miss it.” I was in Comic Con actually promoting a video game, Lara Croft Tomb Raider, in San Diego at that point, I didn’t even think I would get to audition at all, and then I remember being called on a Friday or Monday and them saying they haven’t found the person they want to find, so they’re bringing you and four other girls in. And when I read those sides her name was Amy and it was very generic: the first scene was just a medical emergency, kind of high-energy, and then the second scene was flirtatious, and I think I heard the next day I got it and that I was going to play Justin’s new love interest, but I’ve since talked to Shonda and she said they weren’t specifically looking for that; its just that when I came in I guess I exuded something she saw.

You have a lot of intense story lines this season, are there any you’re interested in aside from Jo’s?
Yeah! But I feel like I may end up spoiling stuff! Something I am interested in is Shane’s journey because he’s been pounding energy drinks to work never ending shifts and I feel like he is trying to compensate for what happened with Heather (Tina Majorino). Now with Karev’s dad I feel like he wants to redeem himself and it takes him a while to really pull himself together and realize the gravity of what he did and so that recovery process for him has been interesting to watch. And any of the other storylines I absolutely adore right now that I tell you will be a complete spoiler, so we’ll have to talk again.

You’ve had a lot of emotional and tough scenes on the show, your fight with Dr. Jason Meyers (Charles Michael Davis) and when the tree flew through the window during the storm. Were there any specific scenes that were hard for you as an actress?
When I first showed up at Alex’s house and I had the bruising on my face that was the first time—usually we shoot the scenes out of order—but that was the first time that I had filmed any scene with makeup on my face. So I knew that that storyline was coming I sort of heard rumors about it and then of course I read the script and it really kind of struck me that that was going to happen to her. And it kind of hits an emotional chord in me and then once I had the makeup on my face it looked so real and they kind of stuffed my lip so it looked like I did have a swollen lip. That was really emotional and then at that point Jo and Karev were fighting and so to have that moment where Alex arrives and he’s kind of whatever, what’re you doing here, I’m over our friendship, and than for her to turn and need his help was such an incredibly incredible moment. That, that for me above any sort of action scene or anything like that was really difficult because it felt so vulnerable and there was a part of me that didn’t want to show him that part of my face. So it was really interesting to play that.

So for the Lara Croft fans, what was it like to voice such an iconic character? Do you approach voice acting differently than you would acting on screen?
I don’t approach it any differently; my audition process was exactly the same as it’s been for any film or TV show, the only difference is that I don’t have a set to work off of, and I have very limited props. So there is an element of a little bit of freeing in a way once you get into what they call the volume because you’re completely using your imagination in a strange way you feel it can be detrimental to your performance or it can help your performance, and in a weird way it’s always helped me. It’s been very freeing because I get to imagine myself in the worst-case scenario, like what would the environment look like to me that’s completely frightening instead of being told what it looks like or seeing it. So I don’t really approach it any differently. And getting to voice her because she’s so iconic, I didn’t even know that I was auditioning for that video game, it was code-named “Cryptic” and I remember thinking “oh she sounds like Lara Croft” and I wore like boots into my audition and a tank top just formally enough I though she reminded me of Lara. Getting the role was really exciting and it is so iconic, but again it was something I didn’t even know I was auditioning for at that point

Are you a fan of the Tomb Raider games, have you ever played them?
[It was] the very first one my older brother had, I should tell you I’m terrible at all video games. I’m maybe okay at Sonic The Hedgehog; I’m pretty bad at everything. But I made it a point to play the first Tomb Raider and then I really didn’t have much experience, because some of the other games, when I got the role I decided to even just go back and look online how it looks and how she moves and just sort of her essence, but what was fun for me was the reboot, and they weren’t really pulling from anything else, there aren’t any key references in our game so I kind of felt in a way that I wasn’t having to follow in any ones footsteps so I could kind of make her my own. But I definitely played that first game, and I definitely played the newest game, and I’m just as terrible at that one too. Even though I know exactly where to go in the game I just really can’t do it.

You can watch Camilla tonight on an all-new episode of GREY’S ANATOMY at 9:00 on ABC; As well as check her out in the Lara Croft Tomb Raider games; Follow Camilla on twitter at @camilluddington