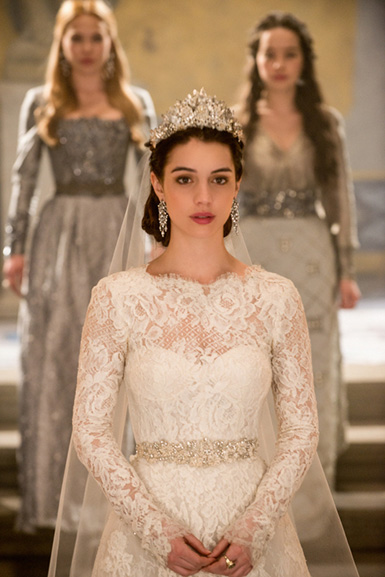 In the upcoming REIGN episode “The Consummation,” the biggest decision of Mary’s (Adelaide Kane) life is before her: will she marry Bash (Torrance Coombs) in anticipation of him being legitimized as the next heir of France, or will she follow her heart and marry Francis (Toby Regbo)? Yet therein lies the crux of the problem: Mary has realized that her heart now belongs to two men — as she loves both Francis and Bash.

But a queen’s heart means nothing. Her duty is to her country and ensuring French protection of her people to stave off the advances of the English and to lay claim to the English throne, if she can.

Fortunately, in this week’s episode, one more powerful player has entered the arena: Marie de Guise, Mary’s mother, the reigning monarch of Scotland in Mary’s absence. Stunningly portrayed by Amy Brenneman (PRIVATE PRACTICE), Marie is a force to be reckoned with. She does not outright forbid Mary from marrying Bash, who is still awaiting confirmation of the Vatican’s acceptance of his claim to the French throne, she merely expresses her disapproval over Mary forsaking the original agreement between Scotland and France and her betrothal to Francis. Sensing that time is against them, Mary and Bash move to speed up their wedding before any further intervention can be foist upon them from all the politically-motivated parents circling around.

Mary’s heart has always been in the right place. She announced her decision to wed Bash in order to save both Francis and Bash’s lives and still honor the French-Scottish agreement. She was willing to martyr herself and give up her love for Francis to keep from fulfilling the prophecy that their wedding would mark his doom, and to try to learn to love Bash and stand by him as the French court tried to accept a former king’s bastard as the heir-apparent upon King Henry’s (Alan Van Sprang) death.

Then there is Catherine de Medici (Megan Follows), whose own fate hangs in the balance. Condemned for adultery and treason, the French Queen is not only forfeiting her crown, but her own head. With matters of state and heart weighing over them, it is inconceivable that Catherine would be preoccupied with her own beheading ceremony and the decor of her own mausoleum. Finally resigned that all her political scheming and attempts to remove Mary as an adversary in her court have failed, Catherine is relishing her final hours as queen.

But then there is a twist in that final day: not only has Marie de Guise arrived to put pressure on her daughter, but Nostradamus (Rossif Sutherland) has had another vision, but is unclear what it means. Nostradamus is torn as to whether his own head will be the price if he reveals what he now sees — and if anyone will actually believe him.

So while Mary and Bash’s wedding is nigh, there is the unexpected arrival of a disapproving mother, a beheading on the horizon, a new prophecy to unravel — and only one heart to determine the fates of them all.

To be 16 years old, Queen of your own country, and to be in love with two men which the fates of entire nations and lives of so many hang in the balance. How shall Mary, the Queen of Scots choose? Which love shall conquer her fears and lay to rest the worries of both France and Scotland?

To see whether Mary chooses wisely or foolishly, be sure to tune in for this week’s wonderful episode of REIGN on Thursday, March 6th at 9:00 p.m. on the CW. With the episode entitled “The Consummation,” only one thing is guaranteed: a wedding and a wedding night.