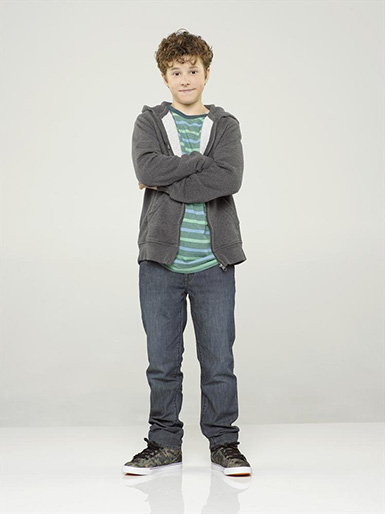 Nolan Gould plays Luke Dunphy, the goofy troublemaker on the four-time Emmy award-winning show, MODERN FAMILY. I spoke with the young actor about how Luke has changed through the years, advice he’s gotten from older actors on the show, and who is most like their character in real life.

How has this whole experience been for you, working on MODERN FAMILY?
It’s been amazing; it’s really been life changing. Acting has always been my dream for as long as I can remember. I never thought that I would be fifteen and on this TV show and going to all these awards shows and things like that, there are so many opportunities. It’s been such a great time; it’s so much fun being on such a huge show!

How has your preparation as an actor changed?
I would say over time it’s actually gotten easier to prepare for my role. All the things going on on a daily basis at MODERN FAMILY you get used to it after five seasons.

You’re surrounding by such an amazing ensemble. What kind of advice have you gotten that has really helped you grow as an actor?
I feel like everyday working with is kind of like an acting class because all the adults on the show really help the younger cast, they give us advice on all kinds of things. Ed O’Neal is great! If he notices that you’re struggling with a line a little bit or if you’re saying something funny during a take he’ll give you advice on how to change it. And all of the producers and writers and anyone watching the show will start cracking up and will say, “Where did you come up with that.”

Are there any actors who resemble their character in real life, or anyone who is the complete opposite of their character?
I’m not like my character at all, Luke is a little dim witted, and he’s not very bright. The person most like their character would have to be Ty (Burrell) he is exactly like Phil off set. He is always making everyone laugh; he’s a lot of fun.

MODERN FAMILY has had such memorable storylines, what’s been your favorite so far?
Of course I always love the episodes where we get to go on vacation like the Australia episode which is coming up, or the Hawaii episode because we actually get to go to those places, which is amazing. But I would have to say my favorite is the one where we kind of re-did The Godfather because Luke got to rock the show in that episode. He got to be that character, and I’ve played him for so long and it’s kind of cool to get to see that different side of him.

What are your plans for the future? Do you want to continue acting or perhaps go to college?
It’s kind of hard to tell, of course I would love to stay in acting, I enjoy it so much. I’m hoping when I get off MODERN FAMILY things are going to be going well, I’ll still be going to a lot of auditions, getting job offers, and working a lot, but at the same time it could go the opposite way. So in that case I would probably like to go to college, I would like to go to college either way.

MODERN FAMILY tends to end the seasons on a surprising note, are there any surprises in store for this seasons finale?
We’ve got a pretty great season finale; it’s going be typical MODERN FAMILY style. The family is going to get together our writers have been working really hard on this episode; this episode is actually Mitch (Jesse Tyler Ferguson) and Cam’s (Eric Stonestreet) wedding. Eric, Jesse, and the writers have all been thinking about this episode and this storyline for five years, so we really want it to be perfect, as funny as possible, and heartwarming. It’s gonna be great!

What’s Luke’s role in the wedding?
He has a little bit of storyline with Manny (Rico Rodriguez) and some things are gonna happen. It’s gonna be really fun! I can’t give away too much but Luke’s got a pretty bit part.