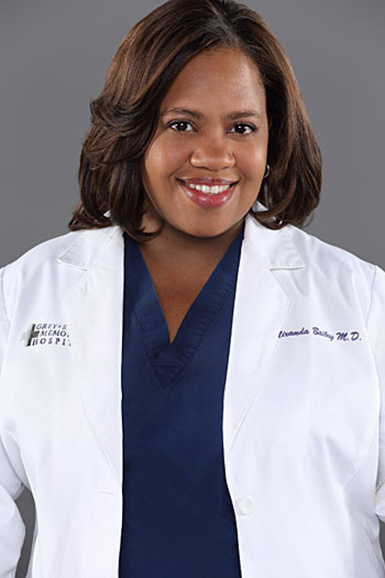 Chandra Wilson plays the beloved, brilliant, and tough Dr. Miranda Bailey on the riveting ABC hospital drama, GREY’S ANATOMY. I spoke with Wilson about her characters future at Grey Sloan Memorial Hospital, how she thinks the couples will react to the new rule against dating co-workers, and what we can expect this season.

Bailey isn’t the same person we saw in the Pilot 9nine years ago, how do you think she’s grown as a person and as a doctor?
Chandra Wilson: Believe it or not, she was only a 4th or 5th year resident when we first met Dr. Bailey. Now, she’s blossomed into who Shepard and Burke were. Her stern persona has changed only in that the audience has seen her flaws and vulnerabilities, so the nazi title doesn’t hold as much weight anymore. But she still holds the same moral compass when it comes to work and family. She has always believed there was a way to have both and she continues to work at having success in both places.

How do you feel about Bailey and Ben, do you think they’ll last? Do you think the fact that he’s interning will put stress on their relationship?
Ben’s internship hasn’t put a stress on their relationship. Bailey just hasn’t done well with change since her hands were responsible for the deaths of three of her patients in Season 9. She loves the idea of marriage and it’s stable nature. They believe that they are the right mates for each other and that they can have the best of both worlds. Ben goes toe-to-toe with Bailey when necessary and finds that he has to do some extra reassurance of how solid they are because Bailey can’t forget how her last marriage ended.

How do you think it would have changed Dr. Bailey if she had been in the plane crash? Have you ever wondered how she would have reacted if she had been in that situation?
Well, that would probably be it for all plane rides ever! And how sweet would it be for Bailey to also be an owner in Grey Sloan Memorial. It would have given her that extra stability in the hospital as opposed to feeling like she could be fired at any moment.

The hospital is very couple oriented, with the new no couples policy do you think it will put a strain on the already existing relationships?
Grey’s Anatomy lives off of strain. Figuring out how to go through stress and strain and still survive is the story of our show.

What has been your favorite storyline for Bailey over the years?
I am really enjoying this OCD journey. It is such a monster that affects so many people in different ways. But her iconic storyline, of course, is still giving birth with O’Malley behind her to George Bailey Jones aka Little Tuck.

Who else’s storyline are you loving this season aside from your own? Is there any character on the show that you can’t wait to see what happens to them?
I love seeing, 9 seasons later, the original cast members thriving for the most part, aging and continuing to be of value as surgeons. Of course, we’re all wondering about Christina’s fitting exit. We still don’t know what will happen.

I know you can’t tell us much about this season, but can you give us any spoilers or things we can look forward to? What can we look forward with Dr. Bailey?
Bailey’s on meds now to keep those anxieties under control, but she’s far from healed. Her OCD rears its head in other ways.

You can watch Chandra on GREY’S ANATOMY tonight at 9:00PM on ABC (CTV in Canada)