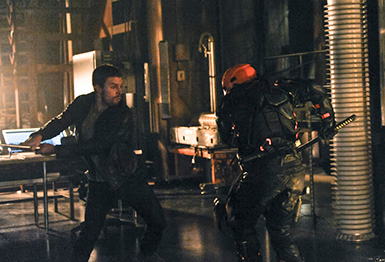 As promised, this week’s episode of ARROW was a non-stop thrill-ride.  It began with Oliver (Stephen Amell), Felicity (Emily Bett Rickards), Diggle (David Ramsey) and Sara (Caity Lotz) breaking into Queen Industries’ warehouse and blowing it up so that Slade Wilson (Manu Bennett) could not get his hands on all the cool scientifically advanced devices inside.  Then it was a race to Central City to try to stop Slade again, but that time they were too late; but it was sure fun to meet Caitlin and Cisco and get an update on Barry Allen (Grant Gustin).

Then Slade decided to pay a little visit to Arrow headquarters and after breaking a few bones and leaving everyone a little worse for wear, he made off with just the one thing he needed. Because Oliver is a glutton for punishment, he then exchanged heated barbs in with his ex and the new CEO of Queen Industries, Isabel Rochev (Summer Glau), which left his ego more than a little bruised. Finally, it was race to save Roy (Colton Haynes) before Slade could complete the building of his Mirakuru army.

Then unbeknownst to Oliver, Laurel was on a quest to determine if what Slade told her was true and whether she should use that information to save her father.  But a heart to heart with Detective Lance (Paul Blackthorne) persuaded Laurel that it may be in everyone’s interests to keep Oliver’s secret for now.  It sure was a nice touch to have Laurel show up to give Oliver a hug just when he needed one.  Slade’s plan to take Oliver apart piece-by-piece seems to be working and he needs every bit of comfort and support he can get.

In a recent press interview, executive producer Andrew Kreisberg provided some illumination answers about the events that happened in this week’s episode “The Man Under the Hood”:

Laurel’s Reaction to Oliver’s Secret Identity
ANDREW:  Laurel has obviously had a very rough year and when Slade told Laurel, he thought was going to be yet another devastating death-charge into Oliver’s life, and I think Laurel’s reaction in finding out the news not taking it at face-value and being smart about it, I think her reaction to the news is surprising.  I think most people assume she’s going to react one way, and that she reacts a different way is great.  It’s funny because it was sort of the same experience with Colin Donnell’s character Tommy, where once he knew it changed his character so much. There was so much more you could write for him.  Just the way he looked at everything in the world. Each scene just became super-charged with him.  With Laurel, now that she knows, whatever she’s doing, whenever she’s in a scene with somebody, her world view has shifted and it’s different.  I think Katie has really risen to it.  It’s really exciting to see how it plays out in the last three episodes.

Why Laurel Doesn’t Confront Oliver
ANDREW:  Laurel makes the very classy decision to keep Oliver’s secret in this episode because she knows what he needs right now is not knowing that she knows.  She will discover later on that there is a time that he does need to know.

Oliver and Laurel’s Relationship
ANDREW:  It’s Oliver and Laurel. They can break up, get together, break up, get married, get divorced, she forgets him.  The best part of the success of the show is our desire to speed through story — just blowing through things — on the other hand the one thing success has enabled us to do is slow-play things.  We’ve really adopted this mantra that:  we give people what they need, even if that’s not what they want. Having Oliver and Laurel get together in Season 1, I think that’s what people needed then. But then they needed them to go on a break so Oliver could have his storyline with Sara for this season, which is what felt right to us. But always, he has women in his life.  He has Laurel. He has Felicity. . . I think Laurel will always be one of the closest people to him, whether that is romantic or not.  That’s why it is sort of so powerful to us that in his darkest hour, Laurel is the one who pulls him out of it.

Isabel Rochev
ANDREW:  Isabel was the one thing we were not entirely sure about as we were developing the season. . . Part of the reason Isabel disappeared for a while was we were still not sure which way to go: whether she should be an ally or a villain.  We had kind of written it so it could turn out either way. I just kept picturing Slade, Isabel, Sebastian in Oliver’s office, like the Triumvirate of Evil.  Once that happened, there was no way she was not going to be Ravager.

On that note, clearly Isabel has a much larger part to play in Slade’s revenge plan now that she has been infected with the Mirakuru, so it will be fascinating to see how soon she faces off against Roy in the upcoming episodes – assuming they can get Roy out of his comatose state.

Look for another roller-coaster of an episode next week with the episode “Seeing Red.”  All new episodes of ARROW air Wednesday nights at 8:00 p.m. on the CW.