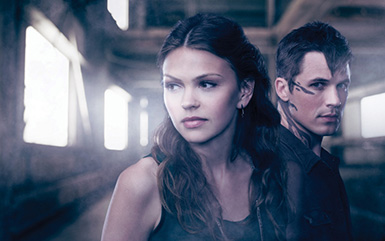 The CW alien-drama STAR-CROSSED was an addictive, heart-warming, intriguing show for those who discovered it. Unfortunately, it ended all too soon after the CW elected to not renew the show for a second season. Since the news broke, fans around the globe have been clamoring for the CW, CBS, Warner Bros., Fox and Netflix to give the show a chance and pick-up for that elusive second season. Alas, those pleas seem to have fallen on deaf executive ears as each network and studio has invested all their programming/production funds in their new slate of television shows.

So in an exclusive interview, STAR-CROSSED’s creator and executive producer Meredith Averill answers a few remaining questions about the fate of the show.

Just to wrap up one storyline question, did Castor (Johnathon Schaech) survive? A few of Johnathon’s tweets made it sound like he might be returning to the show if the show was picked up, or was he being optimistic?
MEREDITH: I think so. I mean, the truth of it is that it is a sci-fi show and cypher exists. But in our minds, it was very important for Teri (Chelsea Gilligan) that she killed Castor at the end of that episode. So Castor is dead.

Okay, turning to the business end of STAR-CROSSED, did you ever get a chance to pitch the second season to the CW and CBS?
MEREDITH: Yes, we did. They were informed about it and they were excited by the story.

Then, the fans want to know, are there going to be DVD’s released for STAR-CROSSED Season 1?
MEREDITH: I don’t know. I hope so. I’m not sure how all that works. It’s decided by people above my pay-grade.

Do you know if the rights to STAR-CROSSED are still retained by the CW or revert back to CBS now that the CW chose not to pick it up for Season 2? Just because fans are still trying to petition, but they do not seem to know which studio or network to focus on.
MEREDITH: I don’t know the answer to that. I appreciate that the fans are doing that. At this point it does not look likely. It is very sweet that they continue to be so supportive of the show.

Was any answer provided as to why the CW passed on picking up STAR-CROSSED for Season 2?
MEREDITH: They didn’t tell us exactly why, but I suspect it had to do with our overnight ratings.

Ratings are a killer. They kill a lot of television shows.
MEREDITH: It’s a bummer. It seems like such an antiquated system. But it is what it is until another system comes along.

It is painful. I try to remind people that over 85 TV shows were canceled that same week. So STAR-CROSSED is not the only show in the world that got canceled, but fans do not like to hear that.
MEREDITH: I looked at that list of all the shows that got canceled, and it’s not like it made me feel better, but I was like, “Oh, a lot of people had a shitty day that day, not just me.” So it kind of put things in perspective.

Also it’s awesome to hear that you and Adele [Lim] are going to be working on two CW shows that we are incredibly excited about, now that Adele’s working on REIGN and you will be working on JANE THE VIRGIN.
MEREDITH: (Laughs) And our offices are right down the street from each other, so we still get to hang out, which is great.

Just as a final wrap-up, what would you like to say to the fans around the world who are still hoping for another season of STAR-CROSSED?
MEREDITH: Thank you so much for the support. It’s been an amazing ride. It’s definitely over much sooner than any of us wanted it to be. But that is true of so many of my favorite shows, like MY SO CALLED LIFE and FREAKS & GEEKS, just to name a few; and they are not lesser shows because they were canceled too soon and it kind of weirdly makes you appreciate them more. So I’d just say re-watch the episodes. There was so much plot we jammed into each episode and there’s so many things you could miss. So I would love it if the fans would re-watch the episodes and find little things here and there that maybe they missed the first time around. I think that’s the best way to kind of honor the show, and that’s kind of the way it lives on — by word of mouth and telling their friends to watch it. I could only hope that STAR-CROSSED ended up like one of those shows, like a cult sort of show that was canceled too soon that people can get excited about. Also just “thank you.” We made the show for them and I’m so thrilled that it’s gotten so many people so excited and that have fallen in love with it.

Since STAR-CROSSED ended on a cliffhanger, to find out what happened to each of the characters and where the story would have gone in Season 2, be sure to read this article: “What STAR-CROSSED Season 2 Would Have Been: Romery, Draylor & Atrian Invasion”

It is always sad to have to say goodbye to a beloved television show, but some just end sooner than others. Here is to hoping that STAR-CROSSED becomes that cult show that more and more fans discover and love.