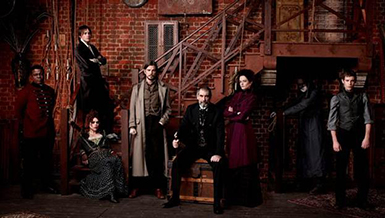 Press Release: SHOWTIME has picked up a second season of its critically acclaimed drama series PENNY DREADFUL, it was announced today by David Nevins, President, Showtime Networks Inc. The network has given an expanded order of ten episodes to the series. Created, written and executive produced by three-time Oscar® nominee John Logan, PENNY DREADFUL has been embraced by the network’s subscribers, drawing 4.8 million weekly viewers across platforms since its launch. The series, which debuted to rave reviews, has claimed the spot as the network’s No. 1 watched new show ever on SHOWTIME ON DEMAND® and SHOWTIME ANYTIME® with over 3.6 million viewers on those platforms through the third week of the season. Starring Josh Hartnett, Timothy Dalton and Eva Green, PENNY DREADFUL will go into production, and will once again shoot on location in Dublin, Ireland for a 2015 launch.

“Picking up PENNY DREADFUL was one of the easiest decisions I’ve made,” said Nevins. “The series has had worldwide impact, drawing big, passionate audiences on both sides of the Atlantic, and more than any other show on our network has hit the bullseye with viewers who want to watch television in all the new ways that are available. John Logan has deftly created an epic series that has drawn raves from a wide-range of audiences from quality drama lovers to critics, to hardcore genre fans. We look forward to working once again with our partners at Sky Atlantic and are extremely excited for what’s in store for season two.”

PENNY DREADFUL’s series premiere was sampled early across online, On Demand and authenticated platforms, and the debut episode now ranks as the biggest sneak preview ever and the largest online streaming sampling ever for SHOWTIME, surpassing RAY DONOVAN and MASTERS OF SEX’s premieres by half a million viewers through the premiere week.

PENNY DREADFUL is not only a hit in the United States, but has also attracted an early global audience, debuting as the second-highest-rated launch for an original commission ever for Sky Atlantic, and also ranked as the second biggest program of the week in pay TV homes for the premiere episode in the U.K. Additionally, the John Logan created world of PENNY DREADFUL has inspired unprecedented interest with a wide range of licensees. Special edition classic horror books boxed sets, cast action figures, and tarot cards, are among the early items hitting the marketplace.

The fifth episode of the series airing this Sunday at 10 p.m. ET/PT is not to be missed – viewers will learn the shocking truth behind the bond that connects Sir Malcolm (Timothy Dalton), Vanessa (Eva Green) and Mina (Olivia Llewellyn). Leading up to this Sunday’s episode, SHOWTIME will air two PENNY DREADFUL marathons on Saturday, June 7th, before and after the 10 p.m. television premiere of The Last Exorcism Part II. Episodes 101 through 104 of PENNY DREADFUL will air from 6 p.m. to 10 p.m. and then again from 11:30 p.m. to 3:30 a.m. Viewers hoping to catch up on what they’ve missed so far can also watch the first four episodes on SHOWTIME ON DEMAND and SHOWTIME ANYTIME. For a sneak peek at Sunday night’s episode, go to: s.sho.com/1mSeJ9D.

In PENNY DREADFUL, some of literature’s most famous characters – including Dr. Frankenstein, Dorian Gray and iconic figures from the novel Dracula, all brilliantly reimagined in a whole new light – have become embroiled in Victorian London. The series also stars Reeve Carney (Spider-Man: Turn Off the Dark), Rory Kinnear (Skyfall), Harry Treadaway (The Lone Ranger), Danny Sapani (The Bill) and Billie Piper (Doctor Who, Secret Diary of a Call Girl). PENNY DREADFUL is executive produced by John Logan’s Desert Wolf Productions, along with Oscar winner Sam Mendes (American Beauty, Skyfall) and Pippa Harris (Revolutionary Road, Call The Midwife), both of Neal Street. A co-production with Sky Atlantic, episodes debut in the U.K. two weeks after their U.S. debut. For more information and video clips, please visit www.penny-dreadful.com.