JANE THE VIRGIN follows the story of Jane Villanueva, (Gina Rodriguez) a strong yet vulnerable, twenty three year old virgin who is accidentally artificially inseminated, though it might be hard to believe, the craziness doesn’t stop there.  Add in a telenovela star, religious grandmother, aspiring singer, cheating wife, the most innocent detective you’ll ever meet, another cheating wife, and a playboy turned good-guy and you’ve got the most delightful show on television.

From the Pilot it was evident how charming and truly magical this show was going to be.  Since it’s premiere it’s evolved into a transcendent masterpiece that’s constantly growing, all while staying true to its original tone.  JANE THE VIRGIN is a tremendous leap in the right direction for The CW and is a show the network should be especially proud of.

Trying to find a few words to describe Jane would be like Petra (Yael Grobglas) not doing anything illegal or inappropriate, it’s nearly impossible.  Jane is innocent and naïve while at the same time is making life-altering decisions.  She is by no means one sided.  Jane is a character that was missing from primetime television for quite sometime and was desperately needed to bridge the gap between a handful of different genres of television.   Rodriguez shines as the shows protagonist, her performance is strong and something that hasn’t gone unnoticed.

While Jane is the shows most powerful force that doesn’t discount from the fact that each member of Jane’s family could have their own spinoff, and every one of them would be successful.  I would watch a whole show on Xiomara (Andrea Navedo) trying to pursue her singing career all while trying not to let herself fall for Jane’s father, Rogelio. (Jaime Camil)  I would most definitely tune in every week to watch her grandmother (Ivonne Coll) go through her daily routine while meddling into everyone’s business.   And I would without a doubt watch a show set around Rogelio’s career as a telenovela star.   Not to forget the two extremely memorable men in Jane’s life, Michael (Brett Dier) and Rafael (Justin Baldoni).  We’ve witnessed suspenseful love triangles before on television but not to the extreme where we ourselves don’t even know who we like more.  Each week we fall more in love with Rafael, trying to justify his “bad boy” behavior and troubling past to make himself worthy of Jane’s love.  But while we’re fighting for Rafael a part of us still adores Michael and his boyish charm, and how he will do just about anything for Jane, even if it means losing her in the process.    Each character has their own strengths and weaknesses; the personalities are so powerful it’s hard to compare them to any other cast.

This wonderful little show somehow manages to encompass all that is right and beautiful about TV.  It feels like old television in the sense that it’s a show family’s gather around their TV’s to watch week after week.  Though while it has a homey and cozy feel to it, it still feels incredibly fresh and intoxicating.  The woman responsible for all of these deliciously juicy scenes, hilarious performances, and perfectly written monologues is the shows phenomenal creator and showrunner, Jennie Snyder Urman.  The sensational producer has been producing brilliant and enjoyable content for many years now; it was no surprise at all that she would wow us with JANE.  Urman’s shows tend to always have one steady trait; her characters are remarkable and relatable, complex people.  On EMILY OWENS M.D. we met Emily, an innocent, timid, and immensely bright young doctor.  We instantly fell for her, from her soft-spoken manner to her self-conscious sweating; we were immediately drawn to this enormously relatable human being.  Another attribute all of her shows have is an ample amount of heart. Whether it’s delivered by the characters or the plot line, there is no absence of meaning and compassion.

I had the privilege of speaking with the passionate producer about finding the perfect Jane, which scenes she is most excited for the fans to see, and what we can look forward to in “Chapter Eight.” 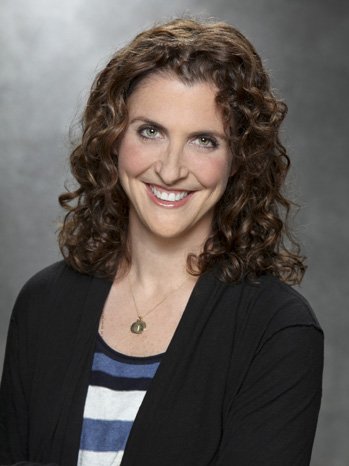 What sparked the idea for Jane the Virgin?  What can you tell us about the whole development process, from the initial idea and morphing it into the hit it is today?
Jennie Snyder Urman: Jane came to me as a property, it was a telenovela in Venezuela and Ben Silverman brought the title to The CW and they suggested he talk to me about it.  I took the logline which is “Girl gets artificially inseminated” and it seems kind of crazy (Laughs) but I started to think about the kind of person that was still a virgin at twenty-three, because the original was seventeen and a seventeen year old virgin is different than a twenty-three year old.  I started to think about her character, and that brought up her mother and her grandmother and then it started to take on this fairytale quality.  When I decided to have the narrator that was sort of my access point to it.   If I could make this little enclosed fairytale with this very specific set of circumstances, this crazy accident happens and then once that happens how does that change everybody’s life.  Once I kind of got over the accident in the first act the story became interesting to me, whereas in the original it takes the first twenty or thirty for her to find out she’s pregnant.  I started to think about all the ways that that could change and create problems and new relationships in people’s lives and then it started to form for me as a project.

The show is casted so perfectly! What was the whole casting process like? Did you know immediately that Gina was Jane?
I knew automatically!   She was the third person that came in; we didn’t even have our director yet we were so focused on Jane first because we were going to build out her family and everything from there depending on who we casted.  Gina was the third person who came in and she really just gave the performance in the audition that she does in the Pilot.  There was nothing to change it was amazing.  When you go to a Pilot testing you want to see a lot of people, we knew we had her and we knew we wanted a few people to read for that role but Gina was the one that was impossible to get out of our heads. I remember coming home to my husband the night after our first day of casting and showing him the audition and kind of freaking out.  I told my husband I felt like I was meeting the one, I told him it felt more romantic than him and I first meeting. (Laughs) I was like “It’s her I have no doubt!”

You have to go through the process and we did with the other actors and they were fabulous, it’s just with Gina she really made Jane acceptable.   That she wouldn’t be this prudish girl that you couldn’t understand or relate to or want to be friends with, people that have made different choices, people that aren’t virgins.  I wanted her to be a character that understands the world, the fact that she’s not having sex doesn’t define her as a person and I felt like Gina brought all of that.

Do you have an episode or scene this season that you are especially excited for the fans to see?
Usually in every episode there is one comic scene I can’t wait for everyone to see and one emotional or romantic or meaningful scene.  I have a lot of those!  I really love one from “Chapter Seven” I really love when you see Rogelio, Jane’s dad and when you see Jane’s mom in conflict.  Jane has always been a girl who has chosen the safe and practical path and what happens to her relationship with her mom when all of a sudden she chooses something else, that’s something I really liked.  There is a scene in “Chapter Eight” (Tonight’s episode) between Rose (Bridget Regan) and Luisa (Yara Matinez) that I play over to myself when I am feeling a little down and I need to see something funny.  I can’t wait for people to see that and to see Luisa’s return and to see where Luisa has been for these past couple of episodes, she comes back with some different energy.  In “Chapter Nine” we release Petra’s back-story and I think people have been waiting to hear about that.  I’m excited about “Chapter Ten” because we do some real stuff with deportation and immigration reform, which is really present right now.  Then we have two giant episodes, “Chapter Twelve” and “Chapter Thirteen”.  I’m excited for the audience to catch up to where we are in the writer’s room.

You mentioned that we will learn more on Petra in the coming weeks, does she get the karma she deserves?  Having accused Rafael of assault and almost killing a man with an urn, she must have it coming to her.
Petra’s a complicated character.  She’s obviously our villain but she really did love Rafael.  Yes, she has done horrible things but she’s felt pressured, her mother has put all of this pressure on her.  Karma definitely comes back and punches Petra in the face and she really gets taken to a low point. But it is Petra and she will rise again.

We still have a long way to go until the end of the season.  Can we expect the baby to arrive before the season is over?
The baby arrives in episode twenty-two, that’s when you’ll find out a lot of stuff about the baby.  We’ve sort of taken our time through the pregnancy in this first season so Jane is going to really have to come to terms with what her plan is and how she is going to be a mother and not lose her sense of self and her dreams, which is something that is very relatable.  The drama with the baby will come should we get a second season, but the baby will come at the end of the first.

What can you tell us about next week’s episode of Jane the Virgin?
Because Luisa has been away for so long they have been postponing Jane’s case against Luisa for Medical malpractice, and the fact that she’s suing her for money, so there is going to be a default judgment in Jane’s favor if Luisa doesn’t come back.  She does come back at the end of the first act and there are a lot of twists that come from there.  You’ll see more movement with Jane and her case and you’ll also see Jane and Rafael’s relationship stressed.

Are you team Michael or team Rafael?
It depends on which episode I’m writing. (Laughs)  I always root for the underdog, you want to make it as even as possible.  If I’m writing an episode about Jane falling for Rafael then I try to fall for him and if I’m writing an episode about Michael and Jane and their love story then I try to fall in love with that.  I find myself very evenly split as of now.

You can watch JANE THE VIRGIN Mondays at 9:00 EST on The CW. (Or on SHOMI in Canada)