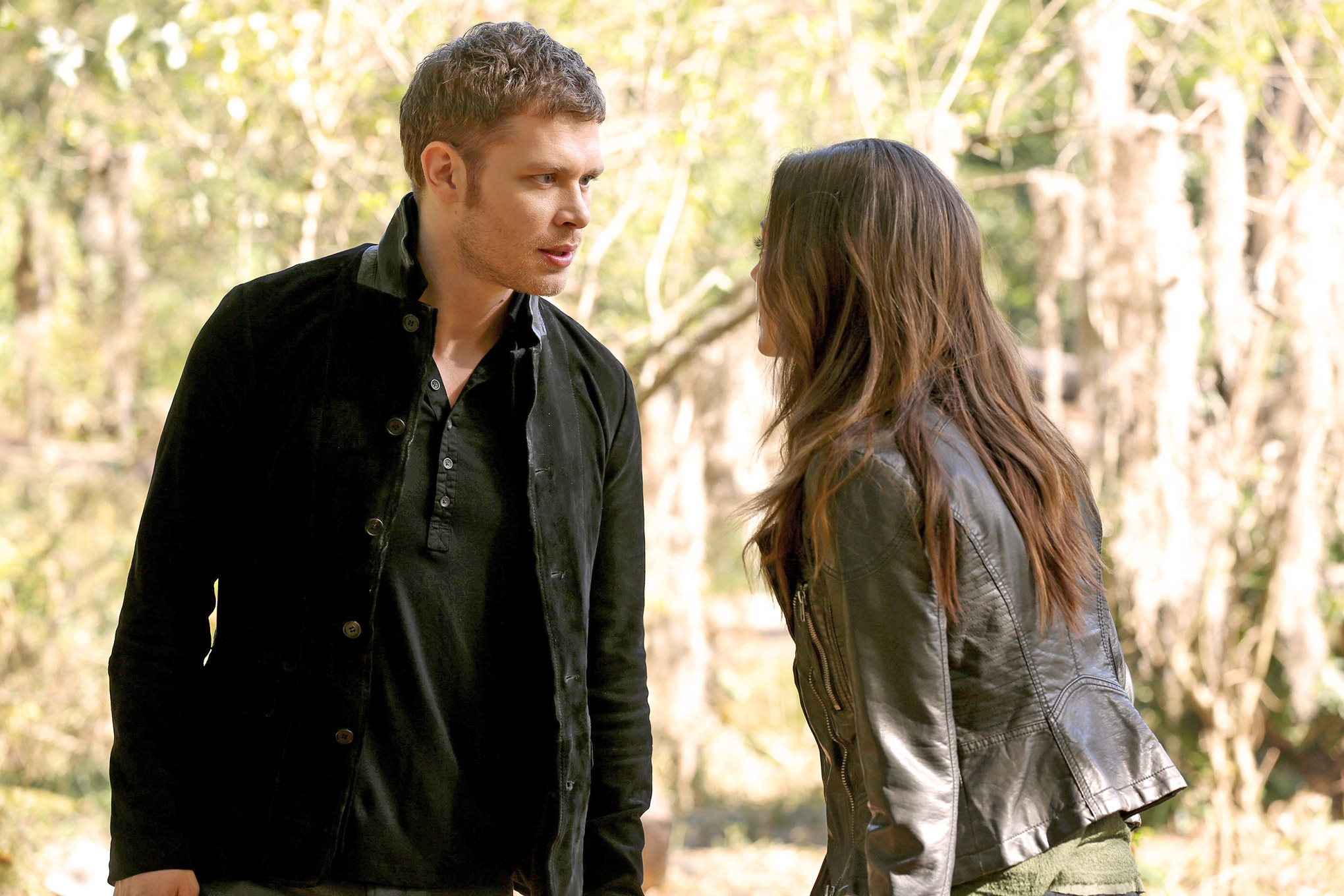 Everyone, this week’s episode of THE ORIGINALS was epic!  It was the kind of epicness that sneaks up on you because all the knowledge and revelations that were dropped came out of nowhere.  I’m still reeling from this episode.  We meet Freya (who may be super crazy), were graced with more Rebekah, saw the Kalus we all love to hate again and Finn figured out about Hope!  Let’s dig in (and this week we’re going to take it storyline by storyline)!

Rebekah and Freya: Rebekah is having a dream while some creepy girl is standing in her room and the dream is about Freya getting taken from their family.  When Rebekah wakes up the next day, she meets with Cassie and tells her that they can escape if they are able to channel something powerful enough to overpower the spell holding them captive.  Rebekah also tries to give Cassie an apple but Cassie refuses it so Rebekah gives it to this nutty girl watching cartoons.

Later in the day, the keepers of the house are beating the nutty girl over the apple and Rebekah goes to her rescue and punches one of the keepers.  The keepers are able to overpower Rebekah and hit her hand with a stick (ouch!) as well as takes the nutty girl’s necklace (I hate that Rebekah is just a weak human and capable of getting hurt).  The nutty girl wants to know why Rebekah helped her.  Rebekah says that girls need to stick together.  That night the keeper that stole the necklace get swept away and is presumed dead.  Rebekah goes to meet Cassie to escape but when Cassie shows up, she brings all the keepers.  They are about to beat Rebekah again, when the nutty girl shows up and magically disables/kills them all including Cassie.  This is where the girl reveals that she’s Freya (I guessed this about 5 minutes into the episode but still a good reveal).  BTW, Freya is like super powerful.

Anyway Freya helps Rebekah leave the house and tells her to warn their brothers that they better be on their best behavior for when she comes to visit.  Freya also mentioned that she had been sleeping for a whole century?!  Um, what?! So many questions but they will have to be answered in later episodes because Freya disappears into the night.

Klaus, Hayley and Jackson: Klaus goes to the bayou in search of Hayley and when he finds her, he demands that she call off the wedding.  He doesn’t want Hayley telling Jackson the truth about Hope.  Hayley says that she trust Jackson (who earlier told her that his grandpa was the one who killed her parents).  And once Jackson knows about Hope and the merge is complete, there will be a pack of super werewolfs to protect Hope.  Klaus says that he is the only one that can protect Hope and on this matter his word is final.  Hayley says she doesn’t listen to Klaus and that he needs to trust her.  Klaus says he does then snaps her neck.

Klaus takes Jackson and intends to kill him.  Klaus demands to know the truth of why Jackson wants to marry Hayley, Jack says it’s because he loves her but Klaus doesn’t believe him.  He is strangling Jackson and Jackson makes Klaus promise that he will help Hayley set their wolves free.  This makes Klaus hesitate and Hayley is able to come to Jack’s rescue.  Klaus says Hayley can tell Jack about their secret but if Jack betrays Hayley, Klaus will kill him.

Finn: Finn still has the vamps and Marcel and is torturing Marcel so that he will tell Finn what Klaus’ secret is.  Marcel says that he doesn’t know because Klaus would never tell him anything that could be used against him.  Kol then shows up and says that he wants to join Finn again.  Kol is really just a distraction so Aiden and Davina can save Josh.  Finn, of course, sees right through this and wakes the vamps up during the rescue mission and they are all very hungry.  Aiden snaps Josh’s neck and carries him out of there with Davina.  Finn gets very angry at Kol and curses him.  The curse is that Kol must stay in his current body, unable to jump into another and then says that he should take these next few days to say his goodbyes.  Finn turns his attention to Marcel and asks him how Hope died.  Marcel can’t remember and Finn knows that this can only mean that Marcel was compelled which means Hope is alive.  Finn knows!

The rundown:
• How precious was the Rebekah and Klaus reunion?  I can’t remember the last time we saw Klaus really smile for anything other than Hope
• Hayley said some low blows to Klaus about him being the one that everyone needs to protect Hope from.  That is Klaus’ biggest fear and it was unnecessary for Hayley to say
• I have so many questions about Freya: why was she asleep for a century? How did she escape her aunt?  Why is she so young? and so on.
• Also, based on Freya wanting her brother on their best behavior, I’m thinking she isn’t going to like Finn very much
• Jackson may be the best romantic speech giver ever
• Anyone else’s heart hurt when Klaus told Elijah how hard Hayley fought for Jackson?
• Where were Cami and Elijah?!
• Aiden and Josh are just adorable, more of their relationship please
• I do really like the new actress playing Rebekah but every time Rebekah’s name is said, I miss Claire Holt.
• Is anyone else confused about Finn’s curse on Kol?  Does Kol only have a few more days to live or does he have a normal human life to live?