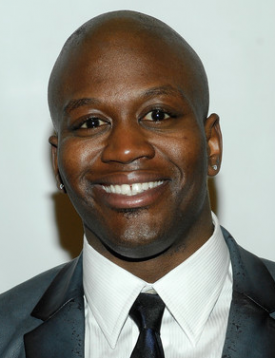 Ever since it’s premiere people haven’t stopped talking about how wonderful and hysterical, UNBREAKABLE KIMMY SCHMIDT is. In a way, the Robert Carlock and Tina Fey comedy has brought back the water cooler chat, only now, the chat is online and in the form of thousands of meme’s, tweets, and Tumblr posts.  There was no doubt that their 30 ROCK follow up would be hilarious and just as addicting, but people were not expecting it to be THIS funny.

While the show itself is brilliant it seems one person is the center of all of these tweets, Tituss Burgess.  Burgess stole our hearts the second he appeared on our screens justifying why he didn’t pay his rent and why he is a perfect tenant.   Burgess is known mostly for his impressive theater credits and beautiful voice, but his role as the over the top performer is bound to make him become a household name.  He brings so much light and joy to the already insanely charming show.  I caught up with the gifted actor about how people have responded to Titus, filming the memorable “Pinot Noir” scene, and what his initial thought of the Pilot was.

What was your initial reaction after reading the Pilot?
Tituss Burgess: After I read the last scene I thought to myself, “Oh no, Tina’s done it again.” It felt as funny and as quick witted as 30 ROCK.  The world was clearly waiting for Tina and Robert’s follow up.  I was just delighted to read something that was so original and so unique.  I hadn’t read or seen anything like it before so I was thrilled.

Did you think it would become such a huge hit?
Honestly there was so much work to do before March 6, 2015 that there was not enough mental space to even dream about or consider how this would be received, After we filmed episode one and episode two we got our crew.   That was a good indication because our crew was cracking up while we were filming.  So what I did think was, this is extremely funny, laugh out loud funny.

Did you think people would respond so well to Titus?
The feedback has been overwhelming!  I have to be honest with you, I was nervous that people would just write Titus off as another gay character. I certainly thought that Tina and Robert had done such a wonderful job of making Titus three-dimensional and not stereotypical.  There is so much more going on than the fact that Titus is a gay man, he’s larger than life.  We live in a world where people just stop at face value and don’t give people a chance.  My worry was that people would allow their own beliefs and certain stereotypes to prevent them from giving all of these people a fair shot.   I did not anticipate so much love, but I am so glad because he is so much more than meets the eye.

Coming from such a musical background like you do, how was filming “Pinot Noir?”  It was so outrageous!
(Laughs) At first I was a little nervous because the brilliant Jeff Richmond came to me and said, “We have this song, this outline, but right now we just have a beat and we’re not quite sure what it’s going to be.  I just need you to go!”  So the beat would trail on and I just made up the whole damn thing.  They would throw out words that rhymed for me and I would in a very Titus-esque way tried to do it.  It was equal parts stressful as it was fun.

Aside from “Pinot Noir” what other scenes stood out to you while filming?
I was particularly partial to the last scene in the Pilot, just because that was the very first day of filming.  I think honestly that’s when I fell in love with Ellie Kemper, that scene holds a lot of sentimental value, I hold that close to my heart.  I love filming the episode “Kimmy Rides A Bike!” Titus does everything in his power to suppress his excitement for her trial and he just can’t pull it together to lie well enough.

What would you like to see in season two?
Well, I’ll tell you this, I didn’t even know there was going to be a season one, and it was all brilliant.  So I would like to see whatever they want to see.  I just enjoy showing up and going to work, doing my thing, and having a good time.  I have no storyline trajectories that I’m hopeful for one behalf of Titus.

You can watch Tituss in the hilarious first season of UNBREAKABLE KIMMY SCHMIDT streaming now on Netflix.