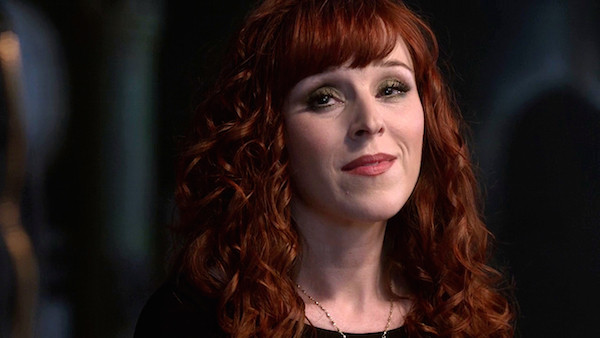 Over the past 10 seasons, you might think we have seen it all from translating the word of god, killing demons, coming back from hell, tracking the yellow-eyed demon, and even making a deal at the crossroads usually to save either Sam or Dean (played by Jared Padalecki and Jensen Ackles) from death.

However, season 10 focused on the two brothers as they raced against the clock to save Dean from the “Mark of Cain,” a mark that was slowly turning Dean into a demon. Fans soon found out that the only key to saving Dean was a very powerful witch named, Rowena (played by Ruth Connell). Although they are only four days into filming the new season, Ruth sat down exclusively with TVAddicts to discuss the blackness ahead.

So I read that you’re a classically trained dancer, what made you go the theatre route, and get into acting?
Connell: My cousin Ruby wanted to take dancing lessons and I was sent along to keep her company. I didn’t realize I was good at it, I just tried really hard at it. When I was 13 I did the Nutcracker, and I’ve been trying to recreate that feeling ever since.

I grew up on a farm in Scotland. There wasn’t even a drama course at my high school, and I was embarrassed to say I wanted to be an actor. Eventually I progressed with my dancing, I worked with some big companies, and went to see plays with a boyfriend, and thought “this is the kind of actor I could be, I could be in plays.” I didn’t make the leap in my mind to Hollywood, and American television.

But it wasn’t a straight forward path. I tried out for Drama College, and didn’t make it, so I had to try again; I did plays, and ballets, and there was a time I didn’t work for a long time.

Around 24 I got into Drama College and for me I felt like “I made it!”

You starred in The Lion, the Witch, and the Wardrobe, you’ve been credited for producing A Midsummer Night’s Dream and Hansel and Gretel, and even created your own Theatre Company. These are no small accomplishments.
Connell: I saw myself as a working actor. I was proud to be working in the theatre. When I graduated [Drama College] I got critics’ choice, and things looked promising, but all of the sudden there were no auditions. So my friends and I set up a theatre company to employ ourselves. I didn’t care about the subject matter, all I cared about was that there were the same amount of parts for women as there were for men.

So you moved to the United States, and landed roles in two Indie films. What changed from doing Theatre work, to wanting to become a film and TV actress?
Connell: Well, in Britain, you cut your teeth on Theatre, and maybe get a chance for TV, and if you’re good you get a chance for film, and now it’s different, you can do whatever. The year I left Britain I had a great agent, and had a chance for a lot of parts, that just fell through. So I came to America for an adventure, but I knew this is where I could get more film and TV experience.

I came back to L.A about 16 months ago thinking I was going to do this [acting] or die trying. And now it’s been a year since I started filming for Supernatural, and it’s given me everything I’ve ever wanted all in one job; I love the cast and the crew, they’re all amazing people. I love going to work.

What was it like getting the Season 10 Finale script? Not only did you live all season, but also now you’re the most powerful Witch on the planet!
Connell: I didn’t think it really dawned on me, but one day I realized, “Shit! I walk out with everything!” I never would’ve thought that’s how the season would end. I thought I’d spontaneously combust!

What do you think is going to happen in Season 11?
Connell: The writers are so cleaver, they’ll write themselves into a corner. But I know the boys will swerve the car around somehow, and I think there will be something soon about what The Darkness is, that people will think is interesting.

Will you be the new “Big Bad” everything has been talking about?
Connell: I can’t say anything! I’m afraid I’ll put my foot in it!

If you could play any other role on the show which would it be?
Connell: I’d like to play Misha’s role, just to wear the trench coat and say the one-liners.

Who is the funniest on set?
Connell: I mean they’re all funny, but I’d have to say Jared. He has a lot of energy.

Who screws up their lines the most?
Connell: Oh, [laughs] I want to keep working!

Who is earliest to set?
Connell: Me.

Who’s the first to hit up the food cart?
Connell: Me! I’m always like “When’s lunch? When’s the Morning Rolls? When’s warm snack?” But Jared and Jensen, they eat.

If you had to choose a love interest, who would you chose?
Connell: Well it wouldn’t be my son! That’d be weird. Rowena would want all three at once.

Would you like to see your character have a love interest?
Connell: Yes, I think there have been elements of love, but I think trust is a bigger issue.

Do you worry about the death of your character?
Connell: I’m in denial.

Scariest moment of your life?
Connell: It was the scariest, and the best day of my life, but first day of filming, and Jensen was directing me, and I had to take a sip of a whiskey glass and not drop it and smash it everywhere because my hands were shaking so much. It was wonderful but I was nervous.

Is the alcohol on the show real?
Connell: I don’t want to spoil the magic!

How does the blood taste?
Connell: Sweet! There’s a cut scene where I stick my finger in a dead animal, and had to keep sticking my finger in the blood goo over and over again, and I think I was pre-diabetic by the time we stopped filming.

Anything you’d like to say to your fans?
Connell: I’d like to say thank you very much, and that I appreciate them. I hope they know how much they mean to me.

Catch the Season eleven premiere of Supernatural on The CW on October 7 at 9pm EST.

Monica Gleberman has been addicted to television since she was a child writing reviews of Mary Tyler Moore and I Love Lucy. As she got older, she realized how important television was to her and how it had shaped her life. Since the age of 13 she has been steadily writing realizing that there are only a few important things in life: Joshua Jackson, Netflix, DVR, and her gorgeous flat screen television. Check out all of her interviews, red carpet events, and latest news on TheTVAddict readers. You can also read her outrageous tweets and check out live streams of events from her twitter @Monica1236