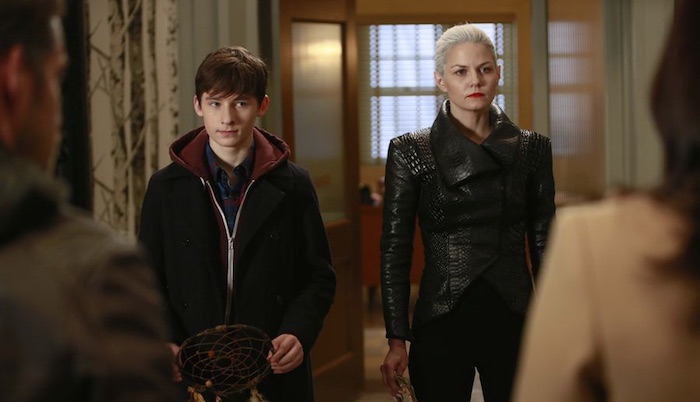 Before we dive into this recap, it is important that you are very well aware that there will be major spoilers ahead. Proceed at your own risk.

I don’t know about you guys, ONCE UPON A TIME fans, but I did not see that coming.

First, they left us hanging two weeks ago with the fact that Emma had turned Killian into a Dark One in order to save his life. That was already a punch to the stomach, but she did it out of love, because she couldn’t bear the thought of living without him.

And then this week’s episode happened.

Now that was a mean one-two punch to the face. I am not even getting into the Captain Swan angst yet, but just the fact that the darkness took over Killian so completely that he not only played Emma, but he was the one who cast the curse in the first place were mind-boggling. As if that wasn’t enough, he was the one to summon every single Dark One that has ever existed in order to destroy all light magic. I mean… what the hell just happened?

We start “Broken Heart” right where “Birth” left off. Killian has just found out that he is a Dark One and he is extremely pissed off, especially when Zelena returns his memories. In retaliation, he wipes Emma’s memory and disappears, taking all the dreamcatchers with him. And because that isn’t enough, Zelena puts that magic binding bracelet on Emma, so now, not only she can’t remember what her plan was going forward, but she is completely powerless to do anything. It doesn’t help that pretty much everyone is very wary of her – with good reason, in their mind – so she is basically isolated from everything and everyone. The last nail on her proverbial coffin is when Henry refuses to trust her and leaves. Of course, Killian is the one to put a knife through her heart when he throws all her issues in her face, and, holy mother of God, the look in her eyes when he tells her he wants to hurt her as much as she hurt him was heartbreaking.

Dark!Hook is equal parts cruel, terrifying and sexy and I have to say that Colin O’Donoghue really surprised me. I knew he was talented, but he took a character that had been a lovesick puppy dog – as he said so himself – and turned him around, transforming him into a completely different character. He is not that Captain Hook we met all the way back in Season 2 and he is not the good man Killian had become. No, this version of Hook as the Dark One is something completely new and Colin did an amazing job. His mannerisms, the way he talks, the way he carries himself are all completely different. At the same time that my heart was breaking for Emma and Killian – for her because she loved him so much and only did this to him to save his life; and for him, because he became the one thing he completely loathed and had spent centuries trying to get rid of his own darkness – I was overjoyed to watch such a powerful performance from both Jennifer Morrison and Colin O’Donoghue. It was so good. So, so good. “Broken Heart” was probably the best episode of the season so far and I am so curious as to where they are taking this storyline.

Hook was immediately consumed by the darkness, both in Camelot and in Storybrooke and it was just so completely heartbreaking to see him killing Merlin and playing Emma in order to get what he wanted. His interaction with both the darkness in Rumple’s form and Rumplestiltskin in Storybrooke was hilarious and so refreshing. Robert Carlyle and Colin work so well together and I had missed seeing them really get into it. In other news, Henry ended up forgiving Emma and helped her get the dreamcatchers back, so everyone’s memories were restored just in time for them to figure out what Hook’s plan actually is, but not fast enough for them to stop him. Also, Regina and Robin let Zelena finally meet her daughter and it was actually a very, very touching moment. There may be hope yet for the Wicked Witch.

Everything about this season made so much sense in this episode and it all came full circle. Excalibur, Merlin’s absense in Storybrooke, Emma’s determination to leave everyone in the dark. I seriously can’t get over how all the pieces fell into all the right places and just how absolutely devastated I am for our Swan.

So what did you think? Hit the comments below or come talk to me on Twitter.

Don’t miss the next new episode of ONCE UPON A TIME on December 6 on ABC.

20-something Brazilian journalist. Crazy about TV. Currently in love with DC and Marvel superheroes, that tattooed lady from NBC, clone conspiracies and dystopian futures. You can reach her at @lucianamangas on Twitter and talk about how much you love TV as well. Or puppies. Puppies are cool too.