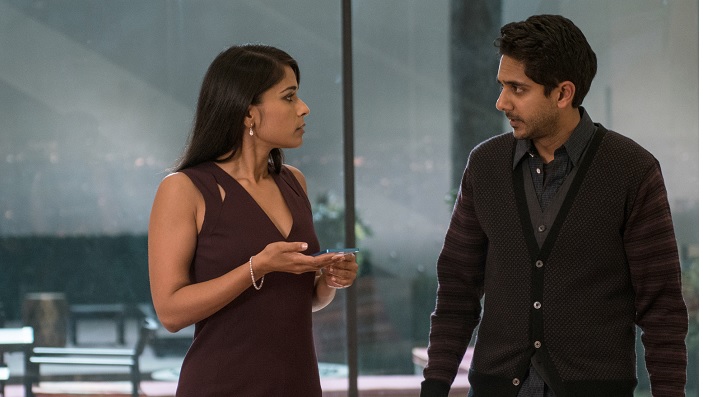 Mary and Otto Goodwin are close siblings. They’re also incredibly intelligent and very wealthy after having founded the tech company Lookinglass (think: bigger than Apple). When SECOND CHANCE begins, however, Mary is ill and Otto is desperately searching for a cure for her. But the cure comes in the form of resurrecting someone from the dead and when he finds a perfect candidate — Jimmy Pritchard — Otto proceeds with his experiment, despite Mary’s hesitations.

During a visit to the SECOND CHANCE set in Vancouver, Dilshad Vadsaria (Mary Goodwin) and  Adhir Kalyan (Otto Goodwin) spoke to journalists about their characters’ close relationship, Otto’s search for his sister’s cure and how the arrival of Jimmy Pritchard throws tension into their relationship.

How Much Does Mary Mean to Otto? “Otto’s center rests in Mary,” Kalyan said. “And so in that sense, how she’s doing and how she’s operating really affects him in a very direct way. If she’s doing well, he finds such great comfort and happiness in that. But, of course, within the framework of where the show picks up and is taking place, this disease — in the way that it’s consuming her — is consuming him too. And, as a result, he’s shifted his focus away from work and is entirely focused on trying to find a solution to do the impossible, really. Which is to try and save her from this terminal illness. So, to speak to that, he is really a character who depends on her and it’s a genuine fear of his that if she goes, that he will be completely lost. And may not know how to get through it.”

Adjusting to a New Person in Their Lives. “Right now where we are with the characters are really just getting used to the dynamic that Pritchard brings into the Goodwin home, and this element that he’s brought into Mary’s life,” Vadsaria said. “Because her two most important people in her life — or the two most important things in her life have been Otto and Lookinglass. And now he’s brought this other facet into her life, and I think that’s quite exciting and new and eye opening and in the sense of she’s never traveled down that road before.”

What Does Otto Think of the Budding Friendship Between Mary and Jimmy Pritchard? As Rob Kazinsky said in our interview with him, Mary and Jimmy “certainly have a balancing effect on each other”. Kalyan said that “there is obviously a degree of chemistry between the two of them. And that is something that you get the sense is going to develop. Those intimate moments become more profound as the season unfolds. But I think Pritchard becomes a threat. He becomes a threat because he is now been given this opportunity to have a second chance at his own life. But with that comes his unpredictable actions. His need to sort of want to do better than he did the first time around. And he often puts himself in harm’s way. By putting himself in harm’s way, he threatens the experiment. Threatens having the ability to provide this service he has to [the Goodwins] in Otto’s mind. But also, more so than that, [there’s] this emotional reaction [Otto’s] not ever seen in Mary before. And I feel like he starts to feel as though Pritchard is taking Mary away from him…I think he’s growing increasingly concerned that not only has this experiment now out of control, but he might lose his sister in the process.” Kalyan also said that “He’s not interested in the emotional quality Mary attaches to him. He’s a means to an end and in his eyes, if Pritchard can’t do it, he would find someone else who could, and if Pritchard can do it, then once he’s fulfilled his purpose then he’s useless.”

Mary as the Moral Compass of the Show. “I think the thing with Mary is that she’s the heart of the show, so she has that moral compass, and where Otto sees Pritchard as something that he separated from an experiment, Mary sees Pritchard as this human being who has these flaws, and the pain and the complications and everything,” Vadsaria explained. “And of course when it comes to Otto, Mary has been responsible for raising him. So it really has to do with her having a very big heart and feeling what each person is going through, and having that dynamic where you have sort of these polarizing characters, and Otto and Pritchard that are so in their worlds and very much on their [own] roads, and Mary having to balance these two important people now in her life. Pritchard she needs to live, Otto is her brother and really this human being that she’s raised from a very young age…so yeah, it’s quite complicated.”

Will the Treatment For Mary Actually Work? “It’s definitely not as easy as [Otto] hoped it would be, but there is a commitment on his part to the solution because there’s no alternative,” Kalyan explained. “The alternative for him is the end of days, really. We will get a sense as to whether this experiment is working or if other steps need to be taken.” In addition to the effects of the treatment on Mary herself, Jimmy could threaten the whole experiment with some of his actions, Kalyan said. “It’s a little work in progress where every 24 hours he still has to go back into the tank so that he can be restored and there are a lot of challenging moments along the way where because of this unpredictable activity, sometimes it is a race against the clock, because even though the idea exists that maybe we could replace him with just another body, you know the effort to sort of go through finding someone with that genetic precursor is a sort of fairly daunting and risky prospect.”

How Jimmy and Lookinglass Allow the Goodwins to Do Good. “Mary and Otto have done good through Lookinglass,” Vadsaria said. “For example, it’s not [just] for profit. If you think about social entrepreneurship and what you can give back, it’s very much that sort of mindset. And it’s a progressive company, so everything they’ve done [is about] how can we help humanity and mankind move forward. What Pritchard now brings to the table is a different way of helping people, ‘here and now in this very moment someone’s in trouble, what are we going to do to get them out of trouble, and every life has its worth’. And in that sense there is that camaraderie that comes in, in that sense there’s that common ground and it’s a different approach now to how we’re going to do it. And of course it’s a lot more action. It’s a lot more fast-paced then what’s happening behind the scenes with technology, trying to cure cancer, and those types of things.”

Don’t miss the series premiere of SECOND CHANCE on Wednesday, January 13 at 9:00 p.m. ET/PT on Fox.